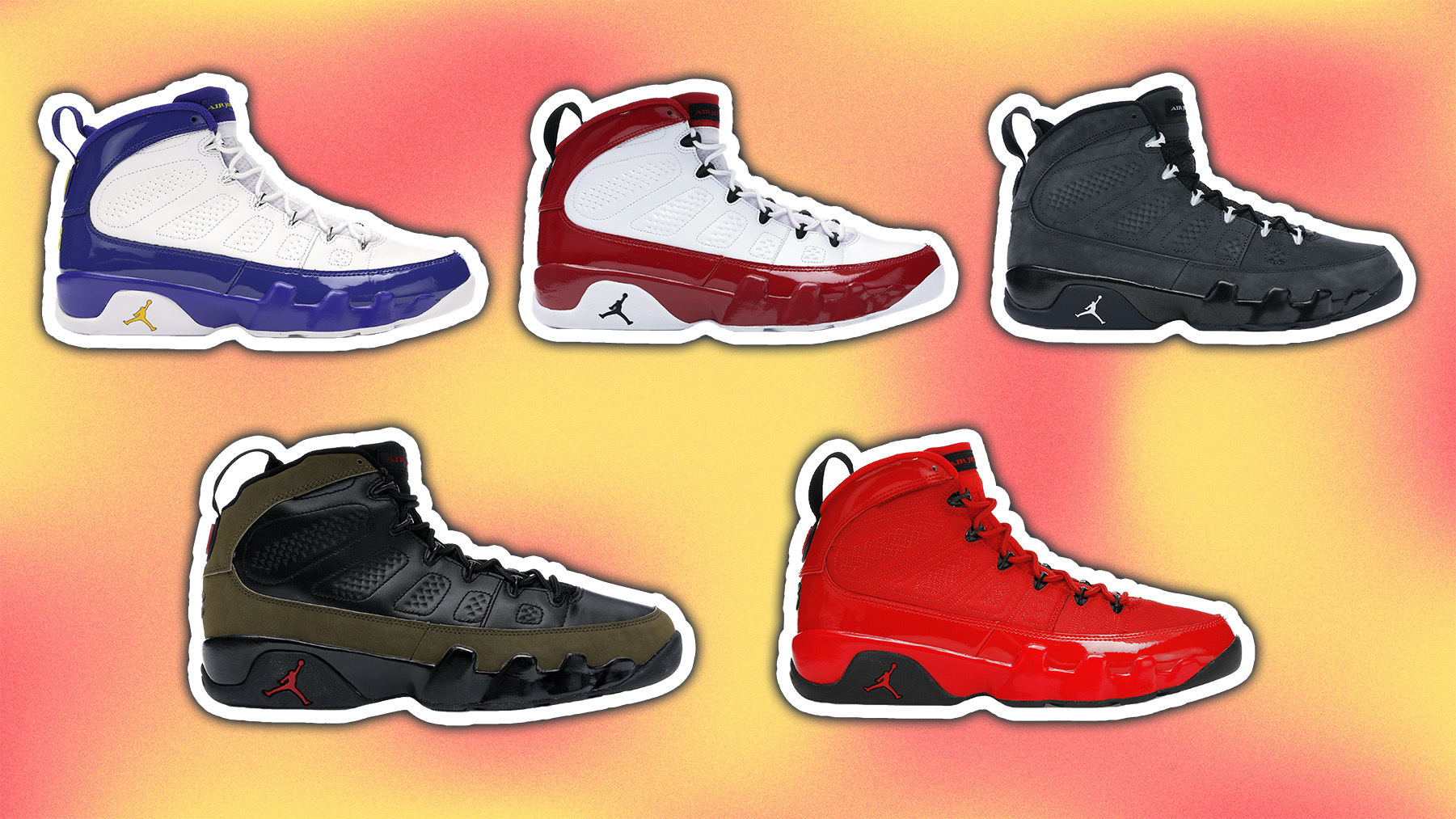 What Is The Air Jordan 9? Your Guide To The Iconic Silhouette

The Air Jordan 9 is the ninth installment in Nike’s series of basketball-inspired lifestyle sneakers bearing Michael Jordan‘s name. It was created by the footwear designer Tinker Hatfield and released in 1993 when Jordan temporarily left the NBA to play one season of minor league baseball.

The shoe was not a technological breakthrough in the realm of high-performance basketball footwear like previous Jordan models. Taking cues from the Nike Huarache, an inner bootie was combined with the heel’s enclosed Air cushioning. The model’s single new feature is the one-pull lacing method, which is made feasible by the model’s thin laces and the plastic eyelets they go through.

The debut color schemes of the Air Jordan 9 consist of “White/Black/True Red,” “Powder Blue,” “Olive,” and “Charcoal.” Starting at a modest $125 USD, their original price has risen steadily over the last several decades per several other silhouettes. In 2002, with the initial retro release of the Jordan 9, a low-top version debuted. Various special and limited editions of the sneaker have been released since then, several of which we delve into down below.

The Air Jordan 9 “Powder Blue”—frequently dubbed the “UNC”—iteration, like previous releases, has a white, black, and university blue color scheme in honor of Jordan’s alma mater, the University of North Carolina. There are phrases engraved into the white outsole’s structure from a variety of languages. This 2010 retro is based on one of the four original AJ9 designs, but it has a unique retro update in terms of materials and looks. On the back heel, where there was no number on the original version from 1994, a stitched ’23’ has been added.

The Air Jordan 9 “Fontay Montana” was released as part of the larger “Johnny Kilroy” campaign, which had a disguised Michael Jordan playing for several teams after his retirement. A white leather upper is set off by orange and blue accents on the mudguard, logo, and sockliner to create the “Gulls” color scheme—the name of the imaginary team that the fictional character played for.

2012 saw the return of the original “Olive” colorway of the Air Jordan 9 which previously debuted in 1994. The initial shoe was released shortly after Jordan’s initial retirement, and its colorway is a departure from the classic Chicago Bulls palette, with a two-tone design in black and Light Olive with minor accents of Varsity Red on the tongue, heel, and midsole. In 2023, the shoe is said to make a comeback, this time with a redesigned design that swaps out the red highlights for brilliant concord and aqua tone hues.

The Air Jordan 9 Retro “Anthracite” is based on the AJ9 “Oregon Ducks” player exclusives, which were given to Oregon University football players for the 2001 BCS Bowl season. The former of which has a subdued anthracite nubuck top and the same six white lacing eyelets. The shoe includes an embroidered “Air Jordan” emblem on the tongue, a glossy piano black rubber midsole, and a black outsole, and the number “23” is stitched on the heel.

Kobe Bryant wore a player-exclusive colorway of the Air Jordan 9 during the 2002–03 season, and the shoe served as inspiration for the existing “Kobe” edition of the silhouette. White leather makes up the top, while concord patent leather overlays and tour yellow detailing mark this November 2016 drop. The shoe also has the Jordan Brand’s iconic #23 on the heels in lieu of the original’s #8.

In an homage to Jordan Brand history, the Air Jordan 9 Retro ‘Bred’ takes design cues from previous player-exclusive hues. The upper is made of black leather, and the laces and heel pull tab are color-matched. The university red Jumpman is branded across the shoe, including the midsole, tongue, and insole, and the number 23 is printed in a matching hue on the heel. It was one of many critically acclaimed new releases of 2018.

The Air Jordan 9 Retro Boot NRG “Beef and Broccoli” updates a design from 1993 with a rugged, grippy aesthetic that’s perfect for wet conditions. The brown and olive boot was released in November of 2018 and has a suede top, gusseted tongue, heel pull button, and red Jordan trademark embellishments. The tough black outsole complements the waterproof coating, rope laces, and metal eyelets of this pair of shoes. It finally came back in 2022 after being absent for a long time, and it was essentially unchanged from its previous iterations.

The Air Jordan 9 Retro, based on an unreleased prototype that appeared in 2013, was officially released to the general public in October 2019. The sneaker’s upper, made of tumbled leather, and inner bootie, made of striped fabric, take on a timeless color scheme of three primary colors: red, white, and black. A one-pull lace lock and internal support straps are still part of the shoe’s one-of-a-kind fastening mechanism. The Jumpman logo appears on the back of the shoe, and a solid rubber outsole with directional traction patterns sits underneath the shoe’s signature Air-Sole.

The Air Jordan 9 Retro “University Blue” is a throwback to the 1990s, with a design based on a player edition shoe worn by Nick Anderson and Penny Hardaway of the Orlando Magic. The sneaker’s molded eyelets and rope laces are black, while the white leather top has perforations. Various branding details, such as the Air Jordan tongue tag and the Jumpman insignia on the lateral midsole, are executed in a university blue.

The black nubuck upper of the Air Jordan 9 Retro “Racer Blue” is highlighted with an iridescent reflective overlay that runs across the shoe’s collar, heel, and base. The sneaker’s logo components, emphasized in the titular hue, provide small flashes of contrast among the shoe’s black midsole and light grey rubber outsole. This was among one of the only AJ9 releases in 2020, debuting at the top of the year whereas another colorway dubbed “University Blue” came out towards the tail-end.

The Air Jordan 9 Retro in “Dark Charcoal University Gold” employs a more muted color scheme, with a dark grey nubuck upper and bright pops of university gold on the collar lining and webbing pull tab. Branding details, such as the Jumpman logo on the lateral midsole and the embroidered number “23,” are also highlighted in a bright, sunny hue of yellow. Among the few releases that came out in the silhouette in 2021, this colorway certainly garnered the most hype as it debuted in a full family-size run.

Featuring a quilted stitched upper, patent leather mudguard, and shining midsole, Jordan Brand brings back the fire in a “Chile Red” composition for the Jordan 9 silhouette. Black lace loops and tongue labels sever ties between the otherwise monochromatic crimson set. The tread on the bottom and the pull tabs at the heel both take pleasure in the contrasting black. Strong enough to stand on its own, this version of the AJ9 draws inspiration from the brand’s storied past and demonstrates that the game will never completely stop.

The Air Jordan 9 Retro “Particle Grey” has a sleek, understated color scheme. The classic style is given a modern makeover with a breathable black textile upper that is locked in with speed laces and finished off with subtle stitching. It has a nubuck mudguard with a neutral grey finish that wraps around the heel and goes up the mid-cut collar. The shoe’s insignia, such as the Air Jordan tag on the tongue and the molded Jumpman logo on the heel, are done in contrasting red. The lightweight cushioning comes from a grey polyurethane midsole with encased Air-sole units in the forefoot and heel.