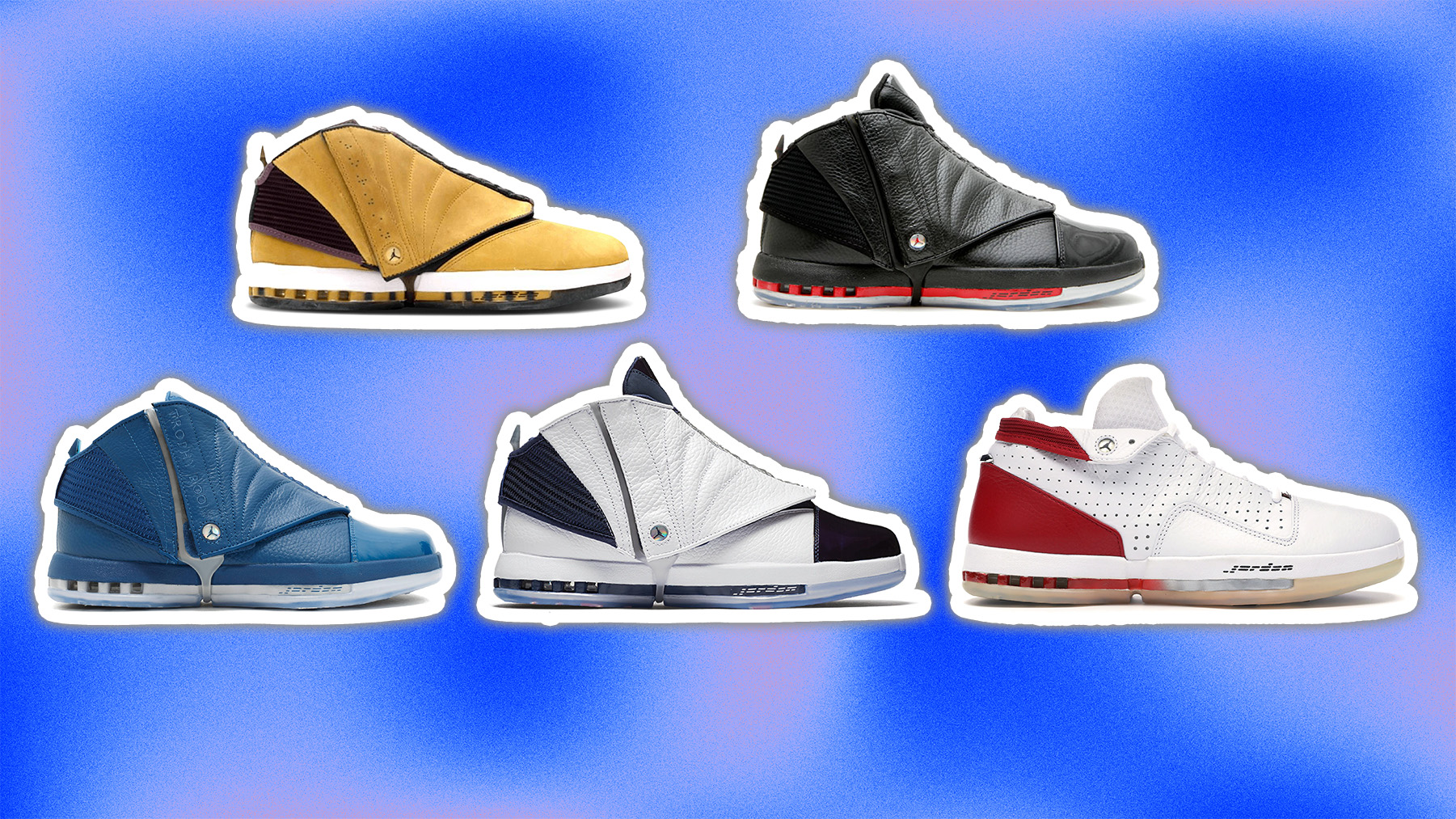 What Happened To The Air Jordan 16? The Rise and Fall of the XVI

With the release of the Air Jordan 16, a fresh designer took over for the first time in almost a decade. Jordan‘s ascension to President and part-owner of the Washington Wizards coincided with a moment of change for the business, so designer Wilson Smith crafted a shoe that paid homage to the company’s roots while being appropriate for the executive suite.

The Air Jordan XVI’s magnetic shroud, reminiscent of a marching boot, has become its most recognizable feature. This lace cover, which can be removed and is both aesthetically appealing and detachable, was an essential design element that allowed for a seamless transition from a technological gaming hero to a fashion statement with the pull of a string. During the 2001–02 pre-season, everyone was taken aback when Michael Jordan stepped foot on the floor wearing the Wizards-themed “Ginger” colorway.

With just a handful of iterations since its 2001 debut, the Air Jordan XVI is widely considered to be one of the least popular Jordan models among sneakerheads and its contemporary competitors. Although it may not be as popular as other Jordan Brand shoes nowadays, this retro model is nonetheless a fascinating throwback. Therefore, we gathered a selection of the most notable releases ever made.

This original Air Jordan 16 “Bred” was released in the classic black and red hue in February 2001. The uppers are crafted from smooth black leather, while the toe box is finished in patent leather. Other distinguishing features include red accents and a transparent outsole. The lacing mechanism is hidden by a black leather shroud in this colorway, making the shoe seem more laid-back, which is typically a bonus. The shoe has a full-grain leather Jordan shroud that conceals the fast lacing mechanism, a carbon fiber sheath, patent leather, and Zoom Air insoles.

The Air Jordan 16 ‘Midnight Navy’ debuted in 2001 and is easily recognizable by the wraparound sock that covers the ball of the foot. The white leather upper is accented with navy patent leather at the toe, navy mesh and suede at the midfoot, and a silvery texture at the shroud. The transparent outsole is branded, and it has infrared highlights and a clear vertical line along the heel. Other distinguishing features include the small Jumpman emblems.

The Air Jordan 16 “Cherrywood” is dominated by white and grey. This colorway features white leather construction on its uppers that’s paired with a burgundy latter and outsole.  Another unique aspect of this shoe is the “shroud,” or lace covering, which serves to conceal the shoelaces while also giving the shoe a more distinctive look. The shroud in this pair is also grey, which complements the sneaker’s primary color scheme.

Varsity red, black, and white were the original colors used for the Air Jordan 16 Low that debuted in 2001. When compared to the standard-height model, the low-top variation is distinguished by its perforated upper and fold-down collar. Undoubtedly one of the least discussed designs among sneakerheads, this shoe presented a fresh spin on the AJ16.

Michael Jordan sported the “Ginger” colorway of the Air Jordan 16 while playing for the Washington Wizards, which debuted in November 2001. Ginger nubuck covers the upper, and a shroud in the same hue is detachable. The midsole is white, and the outsole is black rubber, thus the color blocking is carried through to the shoe.

Sneaker enthusiasts were treated to the debut of the Nike Air Jordan 16 Retro “Countdown Pack” in 2008, a fan favorite from Michael Jordan’s post-Bulls period. One of the shoes paired in the pack was the Air Jordan 7 “Hare,” and the sum of the two Jordans was 23. For the first time ever, the Jordan 16s were retroed in the familiar black and red color scheme.

After the success of their white and black Air Jordan 23s, Miami sneaker shop Trophy Room teamed up with the Jordan brand to create the Trophy Room x Air Jordan 16 Retro “French Blue,” their second collaborative sneaker. The shoe, designed by MJ’s son Marcus Jordan, has a monochrome French Blue upper with patent leather overlays, a premium leather shroud, and an ice-white transparent sole, elevating designer Wilson Smith’s original Air Jordan 16 model to a whole new level of opulence. DJ Khaled debuted a limited run of 5,000 pairs, which were sold during a pop-up event at Orlando’s Tier Nightclub and on the Trophy Room website soon after.

In 2010, Michael Jordan became the first former player to gain majority ownership of an NBA organization when he purchased a controlling position in the Charlotte Bobcats. The Air Jordan 16 Retro “CEO” was released in 2017, several years after the franchise changed its name back to the Charlotte Hornets. The top is outfitted in black with teal and purple accents and iridescent accents that provide shine. Each of the 2,300 pairs is given a unique number that appears on the back of the wearer’s tongue, which helps explain the astronomical price tag that comes along with them.

The Russell Westbrook x Air Jordan 16 Retro ‘Why Not?’, part of the Jordan x Converse Pack together with a Converse Chuck 70, has an all-black design that was inspired by the athlete’s signature leather outerwear. Detailing that alludes to Westbrook’s rugged playing style includes a magnetic shroud that wraps over the midfoot and is covered in tonal embroidery that resembles the appearance of chain netting prevalent on outdoor basketball courts. His bright sense of flair is reflected in the metallic silver studs on the lateral side.