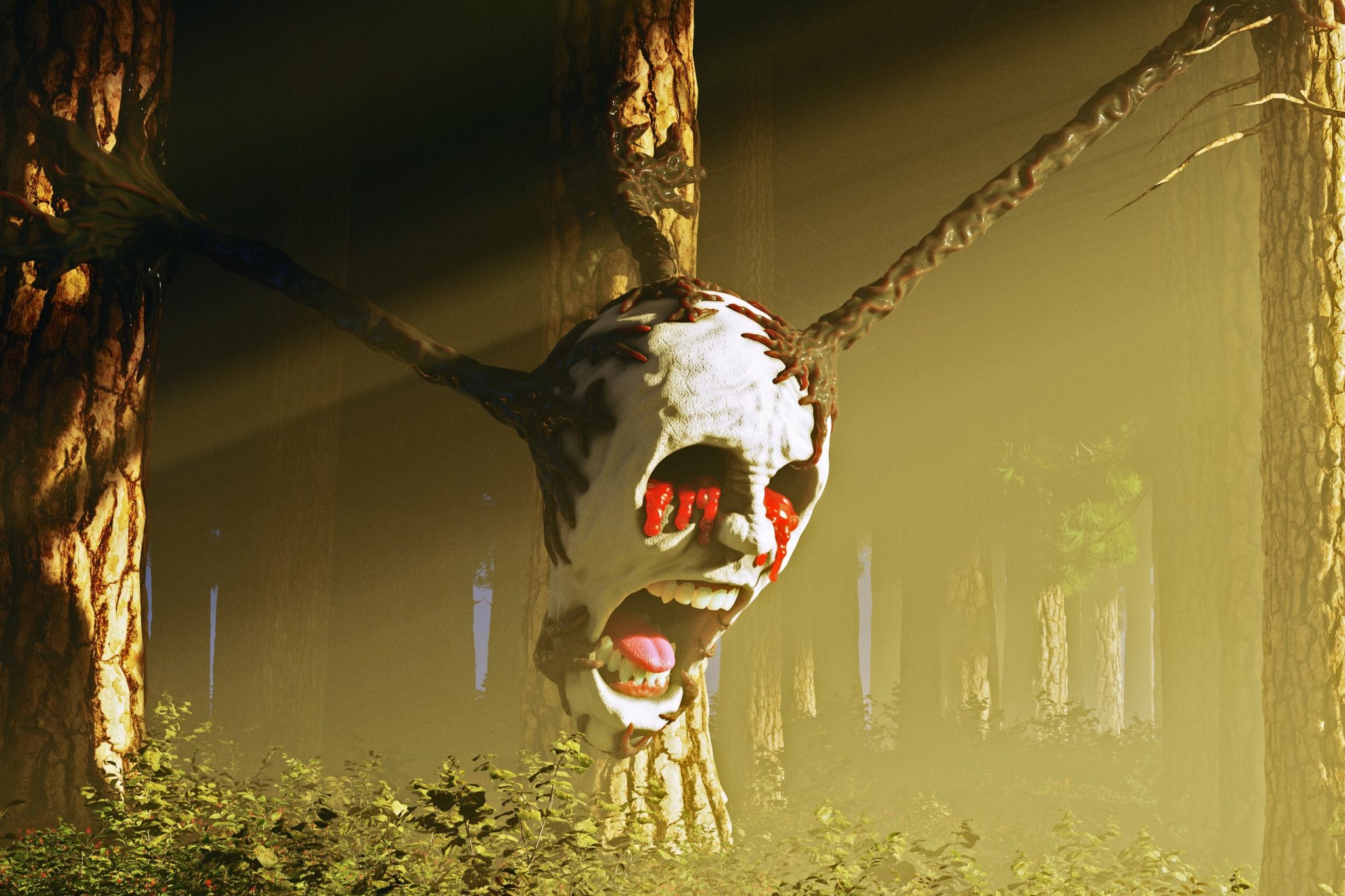 VAD‘s work is so inventive and well-executed that it will keep you engrossed for hours. Using gore and surrealism as primary motivators, the 3D artist produces what he calls “beautifully disturbing” artwork that often reflects his ideas and emotions. He’s also forging his own route in the digital art world and is perhaps one of the most fascinating voices across social media to do so.

Not only does VAD’s skill of 3D digital modeling merit recognition, but in doing so he is also altering the ways in which art buyers and gallerygoers interact with, value, and hold art, most notably via the new digital licensing model of non-fungible tokens. The scope of the worlds he imagines is staggering, drawing inspiration from terrifying fantasy literature and a wide range of experiences and perspectives. The future of art will be shaped by his—among several other burgeoning artists online—vision, which is at once playful, challenging, uplifting, and daring.

Recently, we had the pleasure of chatting with VAD about his creative influences and attributes within the digital world of art, NFTs, and advice for young designers looking to make their mark. Read on for our conversation.

Let’s start off with your journey as a creative and how you got to where you are today. Was becoming a designer, particularly a 3D digital artist, originally something you had planned?

Right from the start, I was making cover artwork or concept designs for random rappers I’d come across. It took around a year until I decided to try and learn the 3D software, Blender. After that, I slowly learned my way through the software until I became comfortable with sculpting and that’s what I’ve been working with for the past year and a half.

Shifting the conversation to something a bit more personal, do you recall the first time you recognized the power of art?

Yeah, of course! So back when I was a kid, around 2007, I was really into homemade stop motion and claymation videos I would find searching through Google videos. I remember getting home from school each day and doing this until I went to bed. Something about these videos would attract me like nothing else ever did before and it really gave me joy. I would make my own clay figures and videos. I believe this is where my original obsession and appreciation for art came from.

You have a strong aesthetic that runs throughout your work—how would you best describe it and the message that you hope viewers are able to pull from it subsequently?

So the best way I’ve been able to describe my style is “beautifully disturbing.” It’s like a mix of feelings when you see it and you’re not sure if you’re supposed to be slightly disturbed looking at them or have a calming feeling. This is really what I want people to feel when they see my art and I hope that emotional message can connect with others as it does with me.

One of the greater opportunities to come as a result of the Internet and art communities is being able to immerse yourself in endless amounts of content and conversation. Where do you draw inspiration from online?

Honestly, a lot of my inspiration has come from past events or emotions I’ve had in my life and I’ll feed off them to create the ideas in my head. Other times, if I’m listening to a song with really meaningful lyrics, I’ll randomly have an idea pop into my head and instantly write it down in my notes or start creating it right then.

Moving onto software and techniques, what tools and platforms do you utilize in the process of creating your art?

Since my work is 100% digital based, I only use my PC, mouse, and keyboard to sculpt and create all my work. I use an open-sourced 3D software called Blender for the main part of my creations and then use photoshop for the post color correction and cleaning-up phase.

I’d love to take a moment to appreciate some of the material you’ve put out recently. Would you mind sharing one or two of your favorite projects over the past several months that have really stuck with you?

It’s very hard to choose but I would have to go with the piece I did in April titled, “Sinking Feeling” and my more recent piece, “Seeking Tranquility.” I never know exactly how my work is going to look in the end but these two pieces hit me in the chest every time I look at them.

Last year, you entered the NFT market through platforms like Foundation among others. What has been your experience thus far, and in turn, do you think it’s something that’ll be around for a while in spite of celebrity cash grabs and plunging popularity?

At first, I was having mixed feelings about it until I started to understand what the meaning of it really meant. Since I started to figure out my style, it’s been kind of an eye opener to see that I don’t have to constantly do meaningless commissions and deal with the annoyances that come with them. This is just the new way for collectors to purchase the rights to your work without having to go to a physical gallery.

In my opinion, it’s the same concept as when the music industry went from CD to digital downloads back in the early 2000s and everyone thought that was crazy too. I think the main problem with the phrase “NFT” is that it’s now associated with the bad cases where celebs came in to make a quick buck off their generated PFP projects. There’s a thriving NFT art movement on Twitter right now and I don’t think even a fraction of the population knows about it, unfortunately.

In terms of upcoming projects that you’re working on, is there anything that you plan on exploring outside of the realm of previous works we’ve gotten from you to date?

Yes, I have so many ideas I’ve been thinking of these past few months. I really want to go into different mediums like getting into 3D printing to make physical pieces of my sculptures come to life. I also want to get back into sculpting with clay and see where that goes.

Given all the success that you’ve reaped as a result of being persistent and collaborating with others, what advice would give to the youth regarding navigating the digital art space during these times?

I’m still learning a lot every day, but I think the biggest thing I could say to anyone trying to get into the digital art space is to not be hesitant with showing the world your work. Also, reach out to any artists or music artists that you admire and send them a DM. You never know what could happen from it and you’ve got nothing to lose.