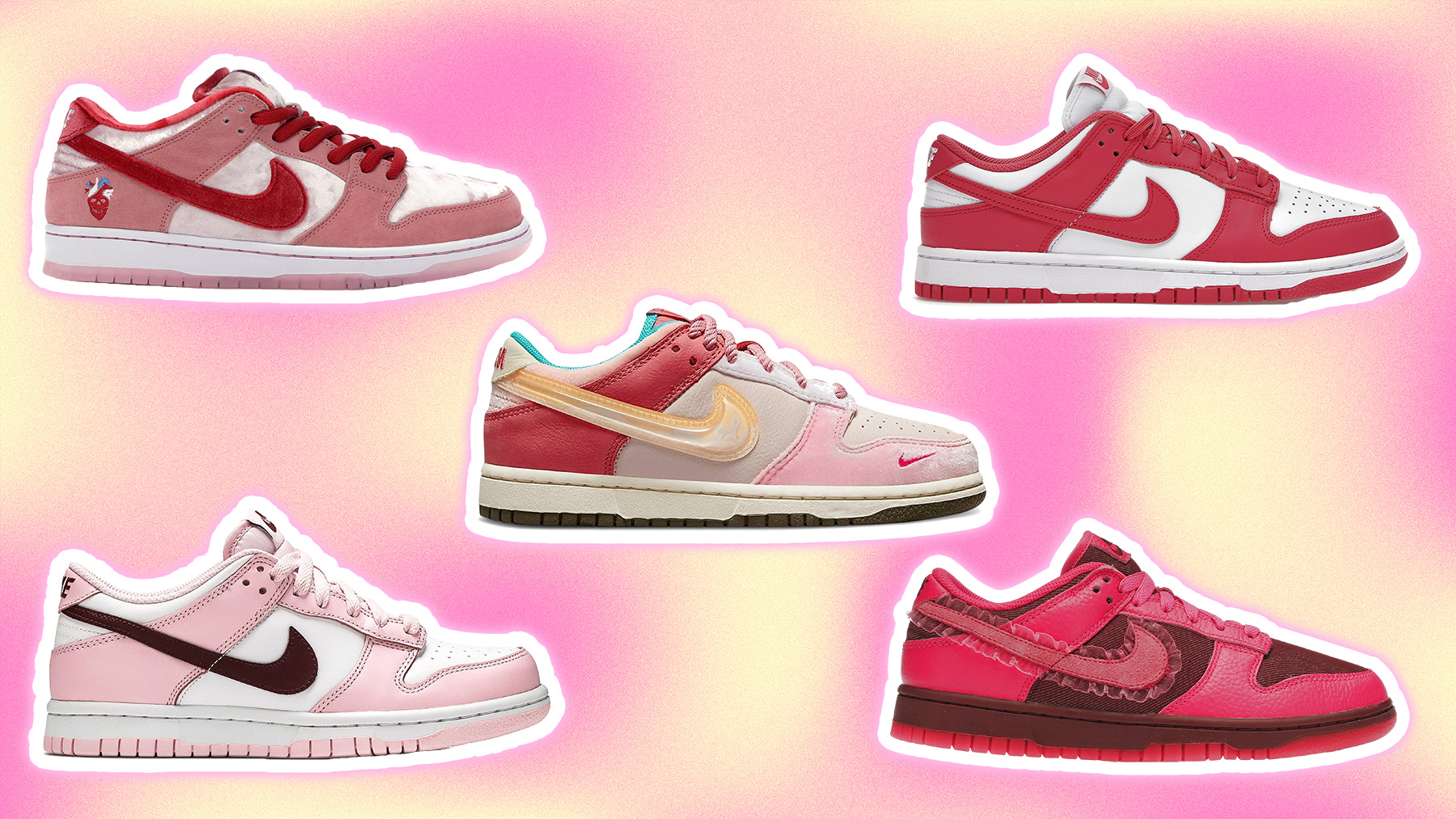 Despite the plethora of Dunk models that have been released in recent years—ranging from college-inspired colorways, collaborative efforts with LeBron James and Lisa Leslie, and animal prints—there have surprisingly been very few pink Dunk Lows to surface online. For the ones that have, they’ve largely been women’s exclusive sneakers or hype releases that are hard to get a hold of.

Despite its origins as a basketball shoe, the Nike Dunk was quickly adopted by the skateboarding community when it debuted in 1996. The SB Dunk, initially released in 2002, not only represents one of Nike‘s first successful steps into sport, but it has also been one of their most popular silhouettes for over two decades for sneakerheads and streetwear influencers alike.

In recent years, the Nike Dunk has become one of the most collectible models in the footwear business, thanks to a variety of factors including high-profile collaborations and diverse color schemes that go with virtually any outfit. Not to mention, the shoe has an endless amount of ways that it can be styled. For the ladies, you can pair them with a crop top and some high-waisted jeans or hop on the trend of wearing sneakers with dresses. Meanwhile, for the men, it’s hard to go wrong with a classic pair of black jeans or stacked pants with a t-shirt of choice.

If you haven’t refreshed your shoe collection for the season, we’ve compiled the best new pink Dunk Lows for you to check out. Continue scrolling to read about the 13 most prominent sneakers that have come out over the years.

Classic two-tone color blocking is applied to the Dunk Low “Archeo Pink,” a women’s exclusive colorway of the silhouette.  The all-leather upper is done up in a crisp white with dark pink overlays and contains the usual suspects like a perforated toe box, cushioned mesh collar, and nylon tongue. In addition to the embroidered Nike wordmark on the heel tab, these shoes have a woven Nike tag for more flair. A rubber cupsole with white sides and a pink rubber outsole complete the low-top design.

A pastel take on the original low-top, the Dunk Low “Orange Pearl” is another women-only release that stays true to the shoe’s ’80s heritage by using the now-iconic color blocking. The top is mostly white, however, it has pale coral overlays for visual interest. The classic Dunk has a perforated toe box and a nylon tongue with a minimal amount of padding and a Nike woven label. Though not as visibly pink as other iterations on this list, the slight undertones make it versatile to pair with different ensembles.

The StrangeLove x Dunk Low SB QS “Valentine’s Day” was designed by skater Sean Cliver in honor of the holiday with a plush update to the classic Dunk Low SB QS silhouette. White crushed velvet is used for the base, with pink suede overlays and a red velvet Swoosh for contrast. The transparent pink rubber outsole displays an assortment of dispersed hearts in contrasting red and blue tones, while the lateral heel has an embroidered version of Cliver’s “Heart Skull” image. Released in 2020, this model is undoubtedly one of the most sought-after Dunk as reflected in its resale price.

The Nike Dunk Low GS updates a classic model for a new generation of skaters without sacrificing any of the shoe’s iconic social reputation or kid-friendly adjustments. This 2009 release has a China Rose leather top with a matching underlay, a perforated toe, and contrasting Swooshes. Logos are embroidered on the tongue and back of the heel. The rubber cupsole, which is reminiscent of court shoes, has been given a modern geometric pattern of speckles. Given how long ago they were introduced, plus the fact that they were a grade school shoes, these have a price tag above average and are tough to acquire online.

For the Dunk Low “Pink Oxford,” the base, toe, mid-panel, tongue, and collar are all colored in a Phantom hue. The Swoosh and the word “Nike” are both embroidered onto the heel, and then a light Thistle is put on top to draw attention to them. Finally, the design is rounded off by the Pink Oxford, whose tread and overlays gradually yellow in a manner reminiscent of the previously stated yellowing. Differentiating it from the Dunk High and Dunk Low Disrupt 2 of the same name are a number of key characteristics.

The Dunk Low “Rose Whisper” has a muted color scheme. The low-top shoe is constructed from leather and features a white foundation with peach overlays for contrast. The nylon tongue and perforated toe box help keep feet cool, while the low-cut padded collar ensures a snug fit. A classic two-tone rubber cupsole provides a stable foundation for the throwback design.

For Valentine’s Day, Nike created a special edition of the women’s Dunk Low featuring lace details and a festive colorway. The upper of this low-top model is made of textile twill material in a deep Team Red color. Overlays of tumbled leather at the forefoot and heel are done in Pink Prime, and the Swoosh is made of hairy suede that matches the upper and is finished with a transparent lace overlay. The sturdy rubber outsole has the same color scheme as the upper, including burgundy and fuchsia.

The timeless look of the sneaker is updated in the Dunk Low GS “Triple Pink,” also known as “Barbie.” Its leather upper is made up of a baby pink base and overlays. The Swoosh, tongue tag, and heel of these Nikes are done up in bright pink for a contrast of color. The rubber outsole similarly is outfitted in the same hues and offers both traction and stability, while the nylon tongue ensures comfort. When you think of a pink Dunk Low, this is what comes to mind in terms of color blocking and material.

A collaboration between Nike SB and Stüssy, the Dunk Low Pro SB debuted in July 2005 as part of the brand’s Team Manager series, which gave managers of professional sports teams the chance to create their own footwear. A Shy Pink foundation, brown leather overlays, and a cream-colored Swoosh are all part of Stüssy designer Robbie Jeffers’s Neapolitan-inspired colorway for the Dunk Low. The metaphorical cherry on top is the tongue tag emblem, which continues the ice cream theme of this sneaker.

Another pair of pink kicks to add to your rotation is the Nike Dunk Low “Silt Red,” which debuted in the summer of 2017. Contrasting panels are layered atop one another on the upper, which is constructed from a combination of light pink suede and leather Swooshes, with a perforated vamp and a mesh tongue for further ventilation. The classic look of the Dunk Low’s outsole is preserved and highlighted with a white rubber compound.

The Swoosh, heel tab, and supplementary branding on this model, often referred to as the Dunk Low “Pink Foam,” all have a rich crimson, almost purple hue. The pair’s basis is white leather that serves as a neutral backdrop for the many pink overlays that adorn the upper. The typical laces, tread, and lining are there and correct, rounding out a late—or early, depending on the time you buy—tribute to Valentine’s Day.

The unusual style of the Social Status x Nike Dunk Low PS ‘Strawberry Milk’ was inspired by the public school’s free school lunch program. The nubuck basis is paired with velvet on the collar, eyestay, and forefoot overlay to create a multidimensional top in various pink tones. The tongues are made of Tyvek with Nike and Social Status branding, while the side panels include a TPU gel Swoosh. The ‘ingredients’ of the shoe are printed on the medial heel. Rounding out the design, the low-top is built on a rubber outsole in olive green and sits atop an off-white midsole.

The leather upper of the Nike Dunk Low GS “Pink Velvet” combines a crisp white midsole with pink overlays. The inside textiles and the velvet heel tab, which feature an embroidered Nike wordmark in bright red, are also done in the same color. Elsewhere,  the model’s woven tongue tag and sockliner are also a flash of the aforementioned hue. Though velvet is implied by the name, only the heel tab is really made from the lush material.