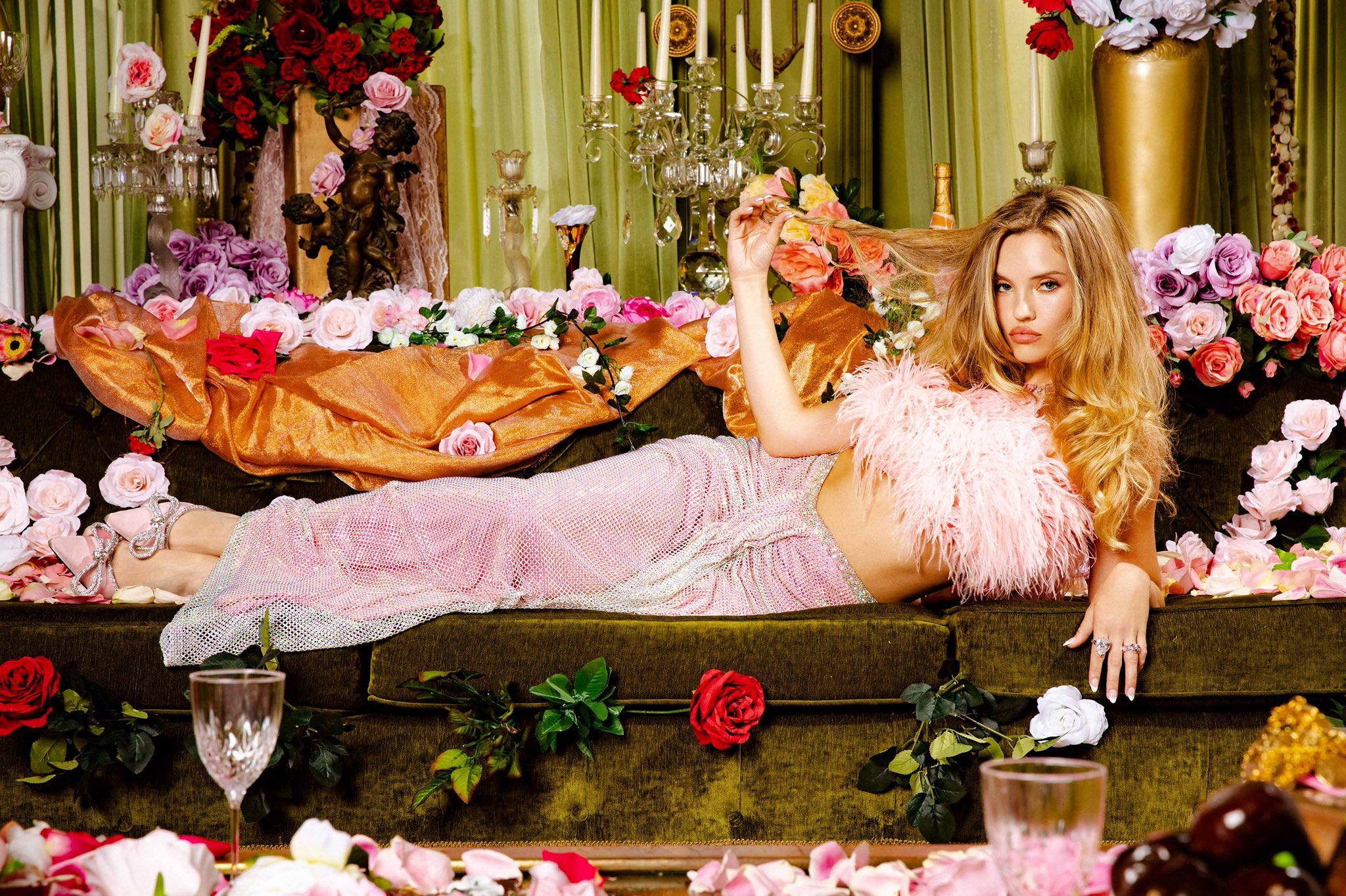 With the aim to inspire and empower listeners around the world, singer-songwriter Stela Cole delivers a slice of sensual heaven that enables women to feel confident in themselves.

In 2018, the musician emerged on the scene with her stunning single “You F O” followed by her debut EP Throwing up Butterflies. Fast forward to 2020, Stela began unloading a slew of singles and arguably some of her strongest works to date, including songs like “Love Like Mine,” “Kiss or Kill,” and “No Man’s Land,” all of which appear on her project Women of the Hour. She had a major breakout the following year with the release of “I Shot Cupid,” garnering over 40 million plays across streaming platforms and nearly half a million on its coordinating visual effort.

After inking a deal with music powerhouse Ultra Records in 2021, Stela unveiled her genre-blending record “Walking on the Moon” and its accompanying visualizer, both of which capture the musician’s unmistakable harmonies. She kicked off the new year by performing on NBC’s American Song Contest, representing her hometown in Georgia and breaking the show’s season record for week one streaming with break-up single “DIY.” Cole’s previous releases pave the way for an exciting new chapter in her career, which came alongside the debut of her glamorous new track titled “Rhapsody in Pink.” Thus far, the multifaceted music starlet continues to win over fans alike with her creativity and versatility.

We spoke with Stela Cole about the new release, her relationship with fashion and beauty, self-care, more music in the works, and much more. Continue scrolling to read our conversation.

Congratulations on the recent release, how have you been feeling about the support it’s been garnering as of late?

Thank you! It’s been amazing, I was super nervous for this one just because it’s so different from all the music that I’ve previously put out. The reactions that I’ve gotten are fucking amazing honestly. I didn’t really get a lot of like playlist support or anything like that, and this was the first song I did not get to go viral. So I’m really blown away by how well it’s been streaming and all the love and support that I’ve received just blew my expectations out of the water.

I love everything from the visuals to the message of knowing your worth. Tell me about the accompanying video, there’s a lot of glitz and glam that compliments your stunning vocals.

Thank you so much. “Rhapsody in Pink” was inspired by The Great Gatsby and the song called “Rhapsody in Blue,” which was a piano jazz piece by George Gershwin that came out in 1924. So I wanted the aesthetic of the photo shoot to feel very in that world and super extravagant. It’s just massive party vibes and it has that at the forefront center of it. My creative director Tina immediately knew what to do with it and it was honestly my favorite.

It’s actually crazy because we didn’t end up doing an official music video for it. We did a visualizer with B-roll footage that my videographer Macy took on the set of the shoot. She just crushed it we had so much good footage that we were able to put together a visualizer, it was crazy. I was like, it was so sick.

Going back to music, you’ve been creating music for quite a while and a lot of your catalog is reflective of your journey and just where you’re at mentally. How would you describe this chapter in your life?

I would say that in this chapter, for me, I feel like artists are always evolving no matter what. For this next batch of songs, I feel like I have finally just stepped into the most authentic form of my music because we cover every single era and genre that I’ve always wanted to include in my music. For the longest time, I was figuring out how to blend everything all at once and have it work. I feel like I have finally figured that out now so I just feel more authentic than ever. I feel like I’ve really stepped into my persona as an artist.

You recently teased an exciting new song called “Star” on TikTok and Instagram. What can you share about that record?

Oh my gosh, I’m so excited about that one. So “Star” was actually a song that I wrote about the industry and just people who don’t believe in you. It’s about the people telling you “no” over and over again because I’m just such a dreamer at heart. I have such big goals that I’ve set for myself. I don’t care how many times someone tells me no or if people hate my music, I’m going to keep going until I get to where I want to be just because I’m very determined.

I believe in the stuff that I make, and I had never written a song about that before. I feel like it’s the first come-up song that I’ve ever played but I’m so excited about it and I actually referenced the Graduation album by Kanye just because he’s one of the greats. That record will be one of my favorites when it came out. I’ve been referencing a lot of Fergie as well. Her debut album, The Dutchess, is so insane so I’ve referenced them for “Star” and I think you can hear it, especially the production.

On that note, who are some creatives that you feel sort of laid the groundwork for where you want to go as an individual?

I have so many people that I look up to. I know that I don’t sound like Rihanna musically, but she’s been my biggest influence growing up listening to music and having a female figure to like look up to. She’s the one. I feel like she’s gonna put out one more album, I really hope she does. It’s so cool to watch her building an empire. I’m like everything that she does, she just crushes it and succeeds, whether it’s like makeup, her lingerie brand, or skincare. Whatever she does when she crushes it so I’ve always looked up to her as a female figure that’s super empowering.

For music specifically, I love OutKast. I think the thing that I love about them so much is that they kind of do a similar thing where it’s like they blend so many different genres of music. All of their songs sound totally different, but they’re always able to bring it into their world and make it sound 100% authentic to them. So I would say OutKast is for sure up there. I love Diana Ross and The Supremes and The Flirtations; like I love female duet groups. I love Dr. Dre and Eminem. Queen, and I love the Beach Boys.

Beyond music, something that reoccurs throughout not just your music videos but image online is your relationship with beauty and style. Tell me about how those two empower you as both an artist and an individual.

I think the reason that I love fashion so much is because I feel like it’s the best way to express who you are on the inside without speaking. You could walk past a random stranger on the street and they can pick up on what your personality is and who you are as a person based on the clothes that you’re wearing. I think that’s so important for artists specifically because I want to make sure that how I present myself on the outside is representing of the music and the creativity that I’m always feeling inspired by internally. I feel like everything should be consistent so it lives in like the same world.

In today’s age, people who are avid music listeners are quite often gravitating to the artist’s image as a whole, whether it be to draw inspiration from their lifestyle or find someone to relate to. Does that create any pressure for you as a musician?

Not really. It’s my favorite part. Honestly, I wish I could live in the studio. I’m such a music freak and making the music is my favorite part. I love getting to be a part of the creative process and watching the vision coming together from like every aspect. So for me, doing photo shoots and posting about my artwork or visuals makes me feel so fulfilled as an artist.

The only thing that is stressful about it at this point is that my branding is very, very extravagant and luxury-looking. I’m still up and coming so sometimes that requires an insane budget that I’m still working up to and I have to save up for sometimes. The only difficult thing sometimes is maintaining that. It’s kind of like fake it ’til you make it in a sense.

I’m curious to know, what are some of your favorite beauty products at the moment?

I had never really known anything about skincare until I moved to LA three years ago. It’s so crazy to know that I wasn’t moisturizing my face every day before. I don’t know how I was surviving without it, but yeah, I use a serum and moisturizer. I typically use the brand Fresh and I love TATCHA. Origins is also great for their tinted moisturizer. I love Supergoop! too. I’m like definitely learning a lot more about it now.

I know that you recently made a post about going on a solo trip this past month, but are you big on other forms of self-care like meditation, spa days, and so forth?

I am. So actually grew up as an athlete. I grew up playing soccer and thought that I was going to play in college, but I had a pretty crazy back injury that I ended up having to get surgery for. It was pretty brutal, but something that I still do to this day just to feel very at peace is getting some kind of exercise. I love going on hikes. I love doing active things and I recently started going back to the gym. I have a personal trainer now just to make sure I don’t mess up my back again because I don’t have time to deal with like another injury like that.

I like to stay active and I like to feel athletic. It definitely keeps me sane at times because for a while, when I got into music, I lost that side of me completely. I had just lost everything that I used to be so I’m definitely getting that back now which feels really big.

With “Rhapsody In Pink” in the rearview and new music obviously in the works, what are you looking forward to next?

Obviously just to keep making music and try to top what I have. I’m hoping either very late this year or early next year, I can hop on a tour. Those are the things that I’ve kind of been holding back on. I’ve just been wanting to wait for the right moment so I’m hoping that I can do that really soon. I might cry. I’m so close to my fans, they seriously feel like my family at this point. The second that I actually do get to meet them and sing with them in person is gonna be the most magical payoff ever.

Do you have any advice for people that listen to your music to get through rough times?

It sounds so cliche, but just be yourself and confident in that. People are gonna hate no matter what. That’s something that I’ve learned, people are always gonna find things to pick apart. As soon as you can have thick skin and shake it off, it’s game over. Be yourself and block out all the negativity because once you can get past that, you’ll be so happy just living your life authentically. That’s what I would say.