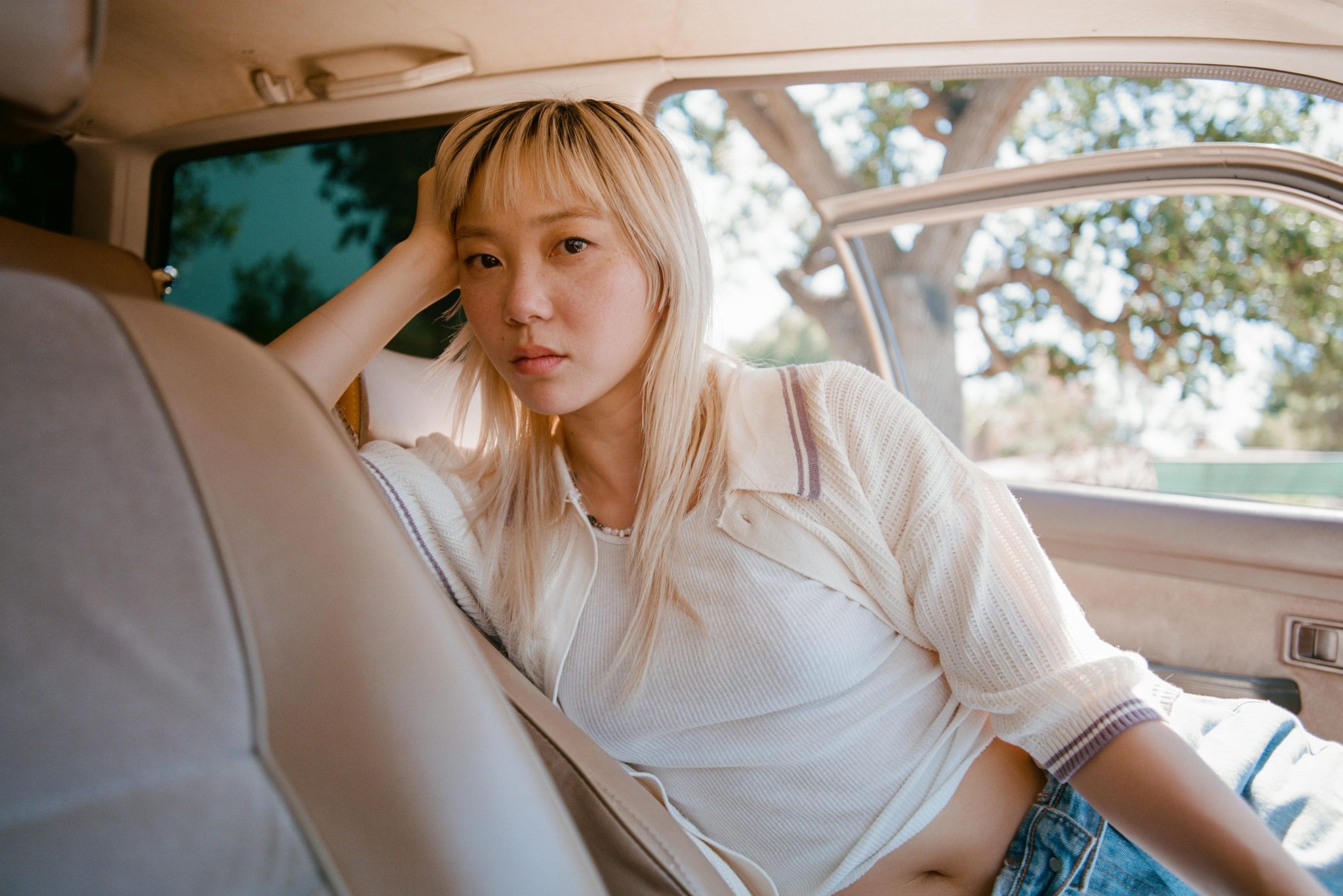 Sophie Chan Andreassend Debuts Her Short Film ‘And Then, I Was’

Sophie Chan Andreassend‘s passion for film photography and capturing fleeting moments of natural beauty fuels her creative process. Her focus uses the female perspective to produce genuine and interesting visual narratives. Taking a tremendous leap forward, the photographer makes her big debut as a writer and director with her very first short film, titled And Then, I Was.

In the film, starring Steffie Bank, Andreassend looks into her own history and attempts to make sense of the circumstances that have led to her present state of being by using a combination of comedy and poignancy. She addresses heartbreak and self-image concerns head-on with a candor that is seldom seen in modern movies. Furthermore, And Then, I Was film intuitively understands the hidden anguish of a broken heart, the subtle cruelty of racial microaggressions, and the paradox of self-love. It’s a six-minute short that documents the ever-so-relatable feeling of learning how to navigate the world and the unfamiliar.

“Doing the film was such a healing process for me and I didn’t really realize it until we finished” she shares.

The tales of Asian Americans are frequently criticized for being dull, uninteresting, and lacking in personal stakes or relevance. These criticisms, however, are based on a Eurocentric assumption that tales should follow a uniform standard. The narrative norms often described are influenced by socially sanctioned tastes. What the market demands now more than ever are more stories like “And Then, I Was,” which are presented from several perspectives and feature individuals whose motivations are influenced by their unique backstories.

“In my work I always look to create diverse representation in both talent and crew, and honesty is my top priority” Sophie tells us. “In the entertainment industry, Asian women are so underrepresented, or if they are represented, it’s in a very particular essence. You go on Netflix and so many of the Asian American characters sort of fit into the same stereotypes. So it’s super important for me to create work where I feel myself represented in something that breaks away from the norm.”

And Then, I Was is also joined by 16 medium format stills of 9 Asian American women, photographed separately from the film. Each of them served as the foundation for the short, which as Sophie explains, took a bit over a year to complete using roughly 66 minutes of film. What originally started off as ten photographs and lingering ideas over time were adapted into this cinematic piece, which ultimately marks some of the most vulnerable work to date from the photographer.

We spoke to Sophie about how her debut film came to life, her cinematic inspirations, and why she chose to tackle themes around self-discovery, love, and personal growth in her work. Continue scrolling to read our conversation.

Can you tell us about the experiences that led to the formation of this short film?

I’ve never written a script before and so I sat down with my friend Nic Ashe who helped me bring the individual scenes together into one motion piece. Each of the scenes started as solo moments that I had felt or experienced in my 20’s, all tied to different people and seasons but we managed to bring it together into a piece that felt like it was all intertwined. I knew from the beginning I wanted to shoot this on 16mm film because it’s such a dream-like, nostalgic, format to tell a story like this. 16mm in particular has such warmth that feels like you’re closer to the subject and brought such a soft texture to the story.

Though you’ve previously worked on a number of projects in the past, what was the process of commissioning and filming like? What difficulties did you face?

The process of putting this film together was a huge learning experience for me and once we were really in it, harder than I anticipated. I have such a spontaneous approach to creativity- I think much in part from being raised by parents who are artists and who always made things with limited supplies. They really taught me that creativity is born from being crafty and problem-solving and that’s the approach that I took to this project. Our biggest constraint was working with a limited amount of film stock which forces you to move with intention and be selective about what you’re capturing.

Tell us about the decision to use the title And Then, I Was, and the relationship these words have with one another in this context?

Originally, I titled this project “I didn’t think I’d be okay again, and then I was”. You’ll see it in the title card and I had it printed on the journal in the film. About a week before we shot, I decided to cut it short and title it “And Then, I Was”, which I really love because you kind of just don’t know what it’s about. It’s a little ambiguous and leaves you thinking, “And then I was.. what?” I’m super happy with the title. It was kind of an accident, but sometimes the best things are.

This film is obviously a deeply personal and vulnerable project for you; what’s it been like watching it back?

“And Then I Was” was a very vulnerable project for me. I don’t share a lot of myself online other than my photography and often with very little back story to who I am. I’ve realized recently how important it is as an artist to explore personal work and draw inspiration from your own experiences. I struggle a lot with opening up to people or being vulnerable in the fear of not being accepted and so watching this back has been a rewarding and healing process.

I’m definitely nervous to release it because up until now it’s been really easy to mask my anxiety and hide it behind closed doors while posting pretty work online. But you know, we’ve all got a story – whether it’s dark or sad or scary or inspiring, someone can always relate in some way and that really was the main reason I wanted to create this.

Did you receive any feedback from the actors and film crew? Was it generally positive?

Yeah, definitely. I was lucky enough to work with a lot of my friends on this shoot and wanted to bring together a crew that could resonate with the story which on any project is such a luxury. Steffie, our actress, was incredible. I’m very grateful to have worked with her. She’s a friend of a friend and when we first sat down to talk about the project, she asked, “How can I represent you in this, but how can we also develop this character and tell this story?”.

Steffie really brought a lot of herself to this role and I love that her personality comes through, too.

Can you tell me about the stills featuring the eight Asian American women and how they laid the foundation for the film as well?

I started this project with the stills and didn’t finish them until after I had done the film. Each image was shot individually and a unique experience. Some shots turned out exactly the way I had planned and others came together on the day in a completely different concept. Everyone who I worked with in the stills was just so open and willing to create with me which was such an amazing process. It’s not often you find so many people that want to collaborate and bring your vision to life with nothing in return.

It was such a beautiful experience to connect with the talent through choosing scenes and also speaking together about our experiences in life, in the industry and in this city.

In my work I always look to create diverse representation in both talent and crew, and honesty is my top priority. In the entertainment industry, Asian women are so underrepresented, or if they are represented, it’s in a very particular essence. You go on Netflix and so many of the Asian American characters sort of fit into the same stereotypes. So it’s super important for me to create work where I feel myself represented in something that breaks away from the norm.

There are various different soundscapes in the background which provide insight into the scenes. What does it symbolize in the context of the film?

I worked with an amazing sound design duo in New York called Retail Space who completely elevated the film through sound. When we first sat down to discuss the project, I gave them singular words to describe how I wanted people to feel when they watched it and they really brought it all to life for me. The themes of anxiety or impatience or circling, overwhelming thoughts- these can be seen in the film but also heard.

In the director’s note, you also talk a bit about how you spent much of your twenties chasing boys and running away from the emotions enveloped with doing so. Can you talk more about this?

It took me a long time to understand how important it is to do the work and to sit with yourself and work through things. I have lived in five different countries now and so much of my 20s was spent chasing boys or trying to seek validation in different ways. For a large part of this decade, I couldn’t get myself out of this debilitating harp and would constantly run away from my emotions and find new ways to distract myself from the things I had been through.

I realised I needed to put in the work because I was like, I’m done. I’m not going to continue repeating unhealthy cycles.

How, as a society and as individuals, can we overcome these silent struggles as you would say, and learn to love ourselves?

I’m definitely one of those people who in my early 20’s would silently struggle. I never really understood what anxiety or depression really looked like and finally understanding it and talking about it meant that I could start working through it. So much of not loving who I was came from a place of bottling everything up and not allowing myself to process the emotions and feelings and thoughts I had or even understanding why I was feeling that way in the first place.

Being able to talk about it meant that I could do the work -whether that’s therapy or journaling or surrounding yourself with the right people who can empathize and listen so you can reach a place of greater understanding and softness with yourself.

What does it mean to you to premiere the film at this time?

I’ve been sitting on this project for weeks now, trying to think of a date to put it out there. It’s vulnerable and the introvert in me wants to keep it hidden but I do want to release it now so people can see it and maybe see themselves in it and resonate in some way. That’s my main intention with this project.

What do you hope viewers will take away from And Then, I Was?

Mostly I hope that someone can relate to this. The world is such an easier place to exist in when you can share an experience with someone. Heartbreak and anxiety and feeling things deeply- it’s all so universal. I used to punish myself for feeling things the way that I do and letting them swallow me whole but the more I experience and go through life, the more I realize that I can embrace it all and that it’s not a bad thing to feel things at depth because it makes you who you are.