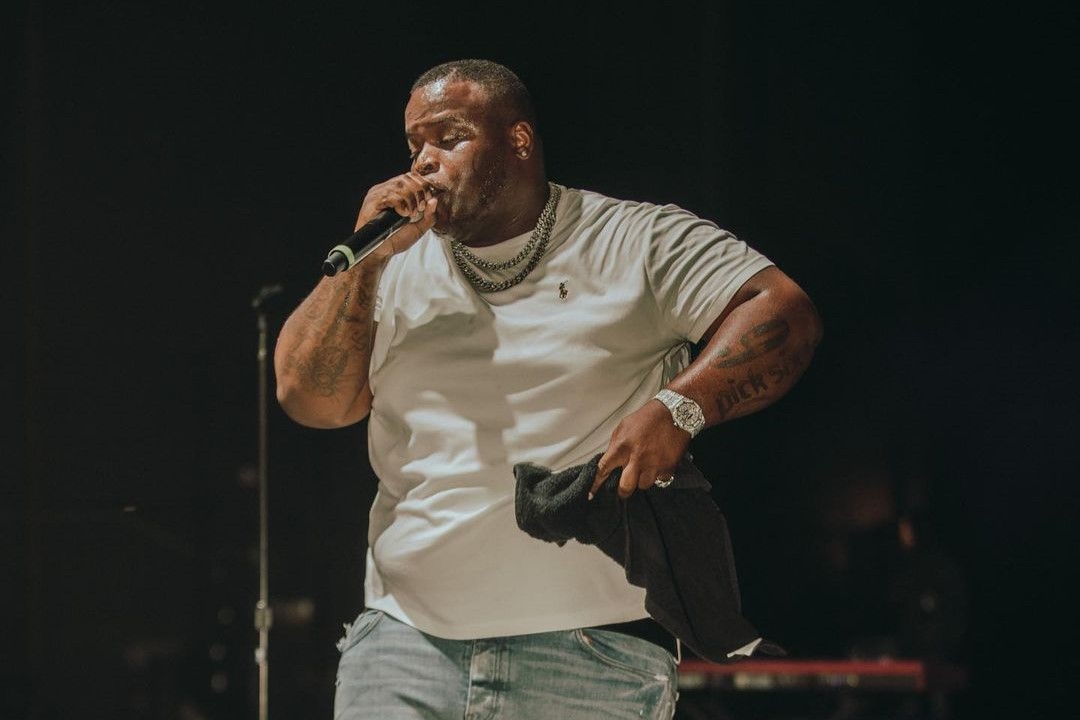 Morray is a burgeoning star with infinite potential for brilliance. The Fayetteville native’s unique voice, razor-sharp lyricism, and straightforward narrative were all on display in his acclaimed debut song “Quicksand,” which was released at the end of October 2020. 162 million views and a full-length project later, he continues to spearhead the music industry’s next generation of artists.

2020’s Street Sermons, which debuted at #41 on the Billboard 200 and propelled Morray to #1 on Billboard’s Emerging Artists chart, draws from the spiritual uplift and church-trained singing that makes the musician’s brand of hip-hop so unique, while also providing unflinching looks at the Fayetteville native’s youthful struggles and indiscretions and analyzing his motivations to succeed. There are universal truths about the traumas and successes of growing up in the ghetto, filtered through Morray’s perspective as a neighborhood boy made good, and his RIAA-certified Gold record “Quicksand” and “Mistakes” are just a few examples.

Coming off the heels of his debut project, he unleashed the Polo G-assisted “Trenches” remix followed by an appearance on the Madden NFL 22 Soundtrack with “Mime.” It set the stage for a slew of other solo releases such as “Bad Situations” and “Never Fail,” which featured Benny the Butcher. Not to mention, he was lauded as an XXL Freshman in 2021 alongside the likes of Coi Leray, Pooh Shiesty, and more. More recently, Morray kicked the year off with “Still Here” in collaboration with Cordae and his Mother’s Day single “Momma’s Love” back in May.

We had the pleasure of chatting with Morray about being able to tour alongside the likes of J. Cole and Kevin Gates, his latest release “Ticket,” being raised in North Carolina, and sneakers among others. Continue scrolling for our conversation.

You initially went on the road with J. Cole for his Off-Season tour in September, and now you’re hitting the stage with Kevin Gates and a handful of other supporting acts. What has it been like to witness all of their greatness while being able to also bask in the fruits of your labor?

Things have been smooth. This tour is definitely amazing, it’s a good upbeat change in my career. I took a little break so it’s great to be back moving. I’m able to do stuff that I never could do before. I can walk into a place and buy whatever I want or if my kids want something, they can just get it. So it just feels good to be a blessing and be blessed for me. There’s no better feeling than getting what you want and what you need without any hiccups.

Considering that you took the internet by storm during the pandemic, what’s it been like connecting with your fans in person finally?

I was on the Off Season tour with J. Cole and 21 Savage, that was the first time I was able to really get on a big stage and showcase what I can do. Now, to be back on stage, it’s still amazing. I can see the look on their face when they see me singing live with no MP3s and it’s just my real voice. I feel good to keep impressing my fans every time I get, it feels crazy. I love it.

Your music is essentially like gospel for a lot of young people. Have you experienced a heart-to-heart moment with one of them that really stuck with you?

I get messages on Instagram and Twitter all the time from people telling me what my music has done for them, how it inspired them, and how they cry to songs. That shit, every day, just makes me feel like I’m doing what I’m supposed to do. It keeps me grounded, and it keeps me wanting to keep working. It keeps me diligent because I know that my music is helping somebody. I get that every single day and that’s a great thing to wake up to and go to sleep to at night.

One thing that I’ve come to love your music for is that you don’t stray away from real-life emotions and occurrences that take place in your life. Does it come naturally to share your experiences within the world given how personal the lyrics may be, or do you find it to be challenging?

Yeah, it’s kind of like therapy. I mean like right now I’ve been going through a lot of real-life shit, you know what I mean? So like I’m going through a divorce and realizing who I am in music. It’s a lot to really just put myself in a position to tell people who’re going through the same thing that it’s gonna get better. You’re gonna go through ups and downs, but just accept it as a blessing. It’s just a learning process for me and I’m glad I get to learn with all my fans and peers.

“Ticket” is your latest offering—it’s produced by Southside and laced with inspirational bars about the struggle. What made this record so special to you?

I wanted people to understand that, yeah I make songs like “Quicksand” and “Bad Situations,” but I come from the same place that y’all come from. I was selling drugs just like y’all were selling drugs. I wasn’t good at it; I fucked up and got locked up for distribution too. I wanted to put myself in a position where I’m just like everybody else, there’s nothing different. They go through the same things that I go through so I wanted my music to be relatable.

I just want everybody to understand that my relatableness is who I am because I’m exactly who they are. I don’t have to act differently than nobody else. I try to be in the same boat and realm as everyone that listens to my music because I feel like we we’re all the same. I wanted a song that says I do the same shit you do, and I ended up becoming better and so can you.

This record serves as a follow-up to “Momma’s Love,” which was released ahead of Mother’s Day. If you don’t mind, can you talk about her impact on you musically?

Of course. My mom is a singer and she sings in church. Music has always been like her first love as well so it just feels good that she passed down that gift to me. I just wanted to put that song out for her and any mothers out there that dealt with a child like me. My mom go put through the wringer with me getting locked up, and doing stupid things; she really stuck with me through it all so I wanted that song to be for her. Nothing we did was in vain and it’s very much appreciated. For those who can’t tell their mother how they feel, I wanted that song to be for them.

Being from Carolinas, anyone from here will recognize that the level of success you’ve achieved is far from frequent. Does that add any pressure to your hero’s journey?

It’s been amazing like to be from the Carolinas, North or South. It’s been amazing to come from a close-knit state and then to have our sister state fuck with me is amazing. I get so much love in South Carolina and North Carolina, that’s why I can’t leave. I stay here still because I love the Carolinas. There’s nothing better than a Carolina night or summer.

I was watching the Christmas giveaway that you did with Vic Blends earlier this morning and that was really inspiring.

A lot of artists give back to the community when it’s convenient or when they got hella help. Most of the time, when I do my events, this comes out of my own pocket. I’m not reaching out to get help and if I do reach out and don’t get it, I still do the event because, at the end of the day, I want to do it. It’s really love and I feel like if I can give back to my city, it’s good to reciprocate.

What do you think can be done in terms of creating a better environment for the youth to explore creative avenues?

Breaking generational curses, bro. I think just because you went through something as a kid doesn’t mean that when you get older, your kids have to go to the same thing. I think that’s where it starts: at home. You can put community centers all over the place, but if you’re not getting that at home then there’s no point to anything. So I feel like if we can just change that aspect of life like if you grew up eating ramen noodles, should your kid have to?

I grew up in the projects so my kids have never lived in projects, rapping or not. I made sure that their life is better than everything I’ve ever done in my life and that’s when it starts. I have respectful good kids; they ain’t cussing at me out here, trying to fight everybody. I made them nice because their daddy isn’t. I just want to do something different. I think it starts with doing shit differently at your house.

You’ve been talking about your kids pretty often so far, how much of an impact has fatherhood had on you?

Being a dad is probably the best part of life. My son is with me right now. Being a dad doesn’t ever stop, it keeps going whether you’re on tour, in the studio, or even if you’re tired. It never stops and that’s part of the best reason why I keep going because my kids look at me. Whatever they need, I get.

There are a lot of good dads in the industry that really do showcase what they are like and it makes me even more comfortable to do so. You look at G Herbo, he’s with his kids all the time and I love that shit. That’s one of the dads I look up to in the industry because I’m like, “Oh, well if he can do this every day then I could do the same shit.” I like it.

Shifting the conversation slightly, I’ve seen you rocking a lot of different kicks in your music videos and on tour. What are some of your favorite sneakers right now?

Who are some artists or songs that you’ve been listening to as of late?

Lately, I know OMB Peezy just dropped his mixtape, I’m actually on it. His tape is hard as hell, I’m fucking with it. Listening to everything that DJ Khaled drops. GOD DID! Rod Wave just dropped his project, it’s hard as hell too. It’s just really dope to see your peers working hard, it makes you want to work even harder.

All of these songs pave seemingly the way for your next full-length effort. Are you looking forward to that next big chapter in your career when the time comes?

I know with this previous project, you really wanted to introduce the world to your story. Do you plan on working with more artists this time around?

Of course, I plan now to just really tap into the industry. I wanted people to know who I was on Street Sermons without any features. I wanted to make sure I can do the show by myself and carry my own weight. In the industry, it’s not always about carrying your own weight, it’s showcasing your talent. It’s about putting yourself in different spots and different vibes so you can reach other fans and stuff like that.

So now that I understand the business and the industry, I move a little differently. Before, I was just excited to go so I didn’t need anybody or want anybody but me. I’m smarter, I’ve been here for like two years now so it’s like I’m ready to actually work.