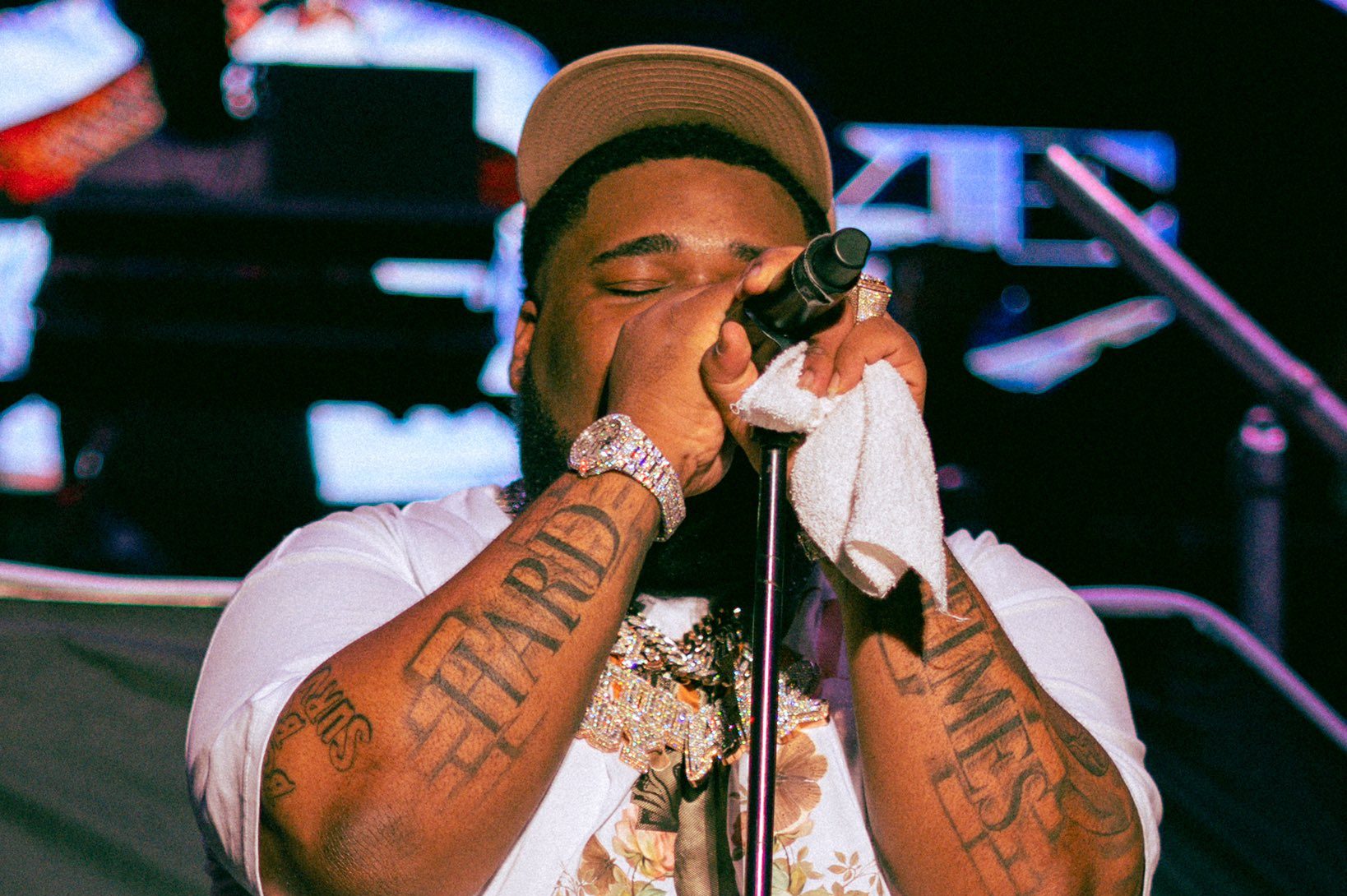 Meet Rod Wave, The Voice Of A Lost Generation

For anyone who’s been following the hotbed of music culture in Florida for the past several years, fast-rising rap phenomenon Rod Wave is one of the industry’s unlikely cult favorites. He dons a similar success to some of today’s biggest pop stars and an undoubtedly mass followership that tunes in for every song he unloads, however despite not being as public or relevant in culture, the algorithm loves Rod Wave.

Keeping abreast with Rod Wave, born Rodarius Marcell Green, has proven to be quite the task. Since his emergence in 2016, the St. Petersburg rapper has since established himself as one of this generation’s most prolific rappers, blurring the lines of hip-hop and soul-infused trap. In his live performances, as well as his music videos, he’s poignant—a character who can be equal parts menacing and emotive. This, however, works in the rapper’s favor, garnering a cult-like fanbase of over five million followers on Instagram and four million subscribers across YouTube. Artists like Rod Wave—much like NBA YoungBoy and his fellow peers that tread the therapeutic genre that he often falls in—typically shy away from the press, public appearances, award shows, or any controversy at that. Though, their ballads are as emotionally-detailed and vivid as if you experienced hard times with them.

In the years leading up to his breakout success, Rod Wave cemented his name as a local up-and-comer through street mixtapes such as Hunger Games and Rookie Of The Year. The former caught the attention of many through tracks such as “Heartbreak Hotel” and “Gambling”—fans will recognize the record sampled years later in YoungBoy’s 2020 song “Death Enclaimed.” The following year, he released the second and third installments to his Hunger Games mixtape series. Moneybagg Yo makes a guest cameo on “Feel the Same Way” while songs like “Heart 4 Sale” and “My Love” evidently set the stage for his rise to acclaim.

2019 saw the release of PTSD, short for Paint The Sky Red, which formally introduced the world to Rod Wave. The mere 12-song project boasts a lone feature from Bay Area legend E-40 while records like “Popular Loner” and “How Would You Feel” quickly separate him from artists who’ve come before. “We talk about love, pain, everyday struggles and I feel like that’s gonna last the longest,” he tells XXL. Soulful pianos, guitar riffs, and heaving 808s position him in a unique place to help fans get through hard times rather than churning out meaningless club songs.

Elsewhere on the project lies one of his strongest records to date, “Heart On Ice.” The RIAA-certified triple platinum cut sees him rapping about his inability to open up to others due to past relationships. In the record, he heartedly croons, “Heart been broke so many times I don’t know what to believe / Mama say it’s my fault, it’s my fault, I wear my heart on my sleeve.” The song, which has been viewed 178 million times on YouTube, later received a remix from Chicago rapper Lil Durk, further propelling the track into commercial success. Meanwhile, his Kevin Gates-assisted single “Cuban Links” began climbing the charts as a contender for triumph as well. Both records appear on his first studio album and poised him to be one of the most beloved rappers among Gen-Z audiences.

Ghetto Gospel marks Rod Wave’s debut album under Alamo Records, spanning fourteen songs with pre-release tracks “Close Enough to Hurt,” “Cuban Links” and “Heart On Ice (Remix)” laying the groundwork for its release. Other records like “Green Light,” “Poison,” and “Sky Priority” rose to prominence in the months following the project. The rapper embarked on his first-ever headlining tour, however, it was brung to a halt amid the coronavirus pandemic. Nonetheless, the project still managed to go platinum two years after it came out alongside several of the songs on it as well.

Following the triumphant achievement of its predecessor and the slew of singles that trailed behind it, including “Misunderstood,” Rod Wave released his sophomore studio album Pray 4 Love during the spring of 2020. Joined by pre-release singles such as “Thief In The Night,” “Dark Clouds,” “The Greatest,” and the project’s title track, the 14-song offering continues to build on the name that fans alike have grown to love in the years prior. Staying true to his signature sound, the album foreseeably debuted at No. 2 on the Billboard 200 during the chart week. Meanwhile, songs like “Girl of My Dreams” and “Fuck the World” helped thrust the project into commercial success, prompting it to go RIAA-certified platinum the following year.

Months after its release, Rod unveiled the deluxe edition to the album, updating the tracklist with a whopping eleven new records and features from the likes of Yo Gotti and Lil Baby. “Letter From Houston” finds him sampling Vistoso Bosses’ 2009 viral track “Delirious” whilst reminiscing on a past lover, while records like “Sack Right” and “Freestyle” see the Florida phenomenon flexing on his opponents as he raps about his fast lifestyle. Meanwhile, Lil Baby appears on the remix of fan-favorite “Rags 2 Riches” and subsequently, Rod Wave reflects on his fatal Corvette C8 car crash in 2020 on “Through The Wire.” Several of the records from both the deluxe and original accumulated a number of accolades and were certified platinum.

Billed as his third studio album, Rod Wave shared SoulFly towards the beginning of 2021. With heightened anticipation around its release thanks to songs like “Street Runner,” “Tombstone,” and the Polo G-assisted cut “Richer,” the project debuted at No. 1 on the Billboard 200 charts, making it his number-one album and the third overall Top 10 debut in the charts. Though in the following months of its release, the project only managed to go RIAA-certified gold in comparison to others which achieved much higher sales-wise. However, songs like “Gone Till November,” “Don’t Forget,” “Sneaky Links,” and “OMDB” proved to be some of Wave’s most celebrated records within his formidable catalog.

The deluxe edition of SoulFly introduced nine new songs, one of them featuring former collaborator Lil Durk while another track, “Get Ready” dons a guest appearance from fellow Florida rapper Kodak Black. Notably, the latter signaled label tension, and fans speculated that lines on the project were aimed at Interscope Records artist Morray as he raps: “Labels used to look past me, now they trying to remake me / Grab a fat nigga out the trenches and replace me.” Though neither of the musicians fed into the supposition, the issues between Rod Wave and his label Alamo Records would continue to materialize in the following months. Moreover, tracks like “What’s Wrong” and “Already Won” featuring Lil Durk managed to surface in the Hot 100 charts upon their release.

“Cold December” arrived in January, and despite the song’s rapid ascension on YouTube and streaming platforms, Rod Wave noted that he didn’t plan on releasing the song but due to pressure from his label, the track came out to fulfill his contractual obligations. “I was in a $15 million deal contract that I was trying to close on and they was like, ‘They need that song,’ so that’s the only reason why I dropped that shit,” he shared via an Instagram post. He continues, “I’m only here for a little money. I’ll leave y’all straight though. I gave y’all straight crack. Nobody was fucking with me with that pen.” The record was followed by “sorry 4 the wait,” which evidently hints at his final album under Alamo Records.

Beautiful Mind, the name of Rod Wave’s fourth album, is currently slated to release later this year. Initially set to come out on June 3rd, and later June 10th, this will seemingly be his final full-length effort as a major label artist for the time being. In June, he to Instagram stories to ask Olivia Rodrigo to clear a sample—”traitor” from 2021’s SOUR—for his album although no updates in regards to the song have come out since then.