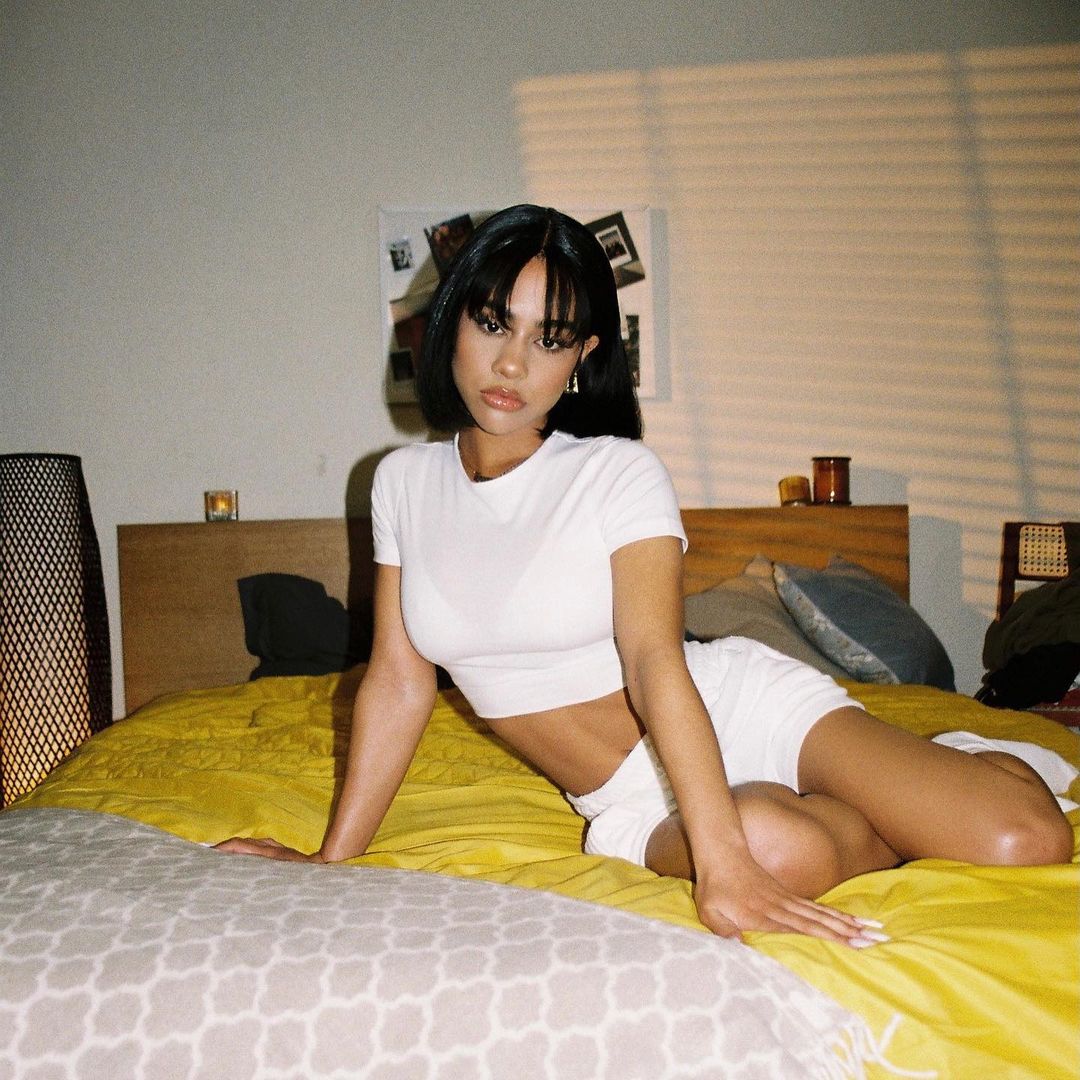 Esther is amongst some of the UK’s most talented R&B acts making international waves. She got her start through singing via Instagram before gaining mass attention from music lovers alike. The Suffolk County-raised songstress released her debut single, “Spicy,” amid London’s first lockdown. She recalls that being the first time in a studio, although certainly not the last chance Esther would have fans on eagerly waiting for new music.

Shockingly, Esther only began putting out music a bit over a year ago and her career has been propelling into viral triumph with each release. Last year, she also put out singles such as “Pourin'” and “Brown Eyes” featuring Coi Leray, which undeniably helped break her into the international scene. Most recently, Esther shared her second offering of 2021 aptly titled “Positions,” which continues to show her development as an artist and person molding herself into the woman she dreamed of becoming.

“Now I’m moving over to a more mature, soulful R&B sound which I feel is more me to be honest,” she tells us. “I feel like just getting more comfortable in my voice is the goal for this year.” If you’re looking for a talented artist to bet on, we’d recommend Esther. You can’t deny the star power in her songs and personality, which creates this overwhelming urge for fans to return.

We got to chat with Esther in regards to her childhood, developing her sound after just one year of taking music seriously, and new music to name a few topics! Read the conversation below.

Hey Esther! Walk me through your childhood, what was it like growing up in Suffolk?

I grew up in quite a small town so there wasn’t a lot going on. I didn’t really grow up in the city so this is all quite new to me, coming to London. All I can really say for it is simple. It wasn’t anything really exciting to be honest.

Who are some artists you grew up listening to? Where do you look for inspiration?

My parents played a lot of Lauryn Hill and The Fugees in the car. Michael Jackson was a huge one for me. I was scared of the “Thriller” video but once I got past that, I was obsessed with him. Beyonce as well. Teyana Taylor, she’s one of the princesses of R&B. Those are probably my go-to’s. Tyler, the Creator as well, those are go-to’s when it comes to looking up to artists really.

In what ways has your sound and style developed over the past year?

Even though it was only a year ago, it feels like ages to me. I’ve just come so far from when I first started recording. When you get in the studio, there’s a lot you have to find out. I feel like working with other people as well, I’m getting in the studio with loads of talented producers and songwriters this year. I think my first song “Spicy” was a bit more Pop and upbeat. Now I’m moving over to a more mature, soulful R&B sound which I feel is more me to be honest. I feel like just getting more comfortable in my voice is the goal for this year.

Your latest single “Positions” dropped not too long ago, what was the inspiration behind that record?

I worked with a really amazing writer and she showed me the demo and I felt like I really related to it. I feel like you can’t really sing songs that you don’t really relate to, you’ll find out that it’s not there. With “Positions,” I had kind of been through that feeling of “I’m over it, I’m ready to treat you how you treat me.” My song before that, “Pouring,” was like “oh my god, I’m sad and want you to love me” but this one was I don’t care if you love me, I’m going to do me, which was like a cool turn around.

Love is a major theme in your music which makes me wonder, how do you define love?

I’ve never been asked that before. I feel like it’s different for everybody. I feel like at this age, when you’re young, it’s so much bigger than it probably is. Which is a good thing because it kind of feels like the end of the world and why would you not take such a passionate thing and turn it into writing? But love for me… I don’t know, that’s such a deep question!

Women in the UK are having movement as far as hip-hop and R&B goes, how does it feel to be at the forefront of that?

I’m so grateful, I think we’ve got so many amazing R&B artists. Like Bellah for example, her COLORS performance was amazing. It’s great to be in the scene and I’ve spoken to some other artists, and they’ve given me advice. It’s such a nice community to be in and I’m so happy to be a part of it, to be honest.

I think in the UK, the Afro sound is a big one right now because of the summer vibes. It’s great to see the recognition of our scene. I think the rise of R&B in the UK is finally getting it’s recognition. Obviously we had Ella Mai but to see more underground artist come out is great to see.

You also teased putting out a project in the coming year, what can you tell us about it?

Obviously I’m molding myself as an artist and I was quite eager to put out an EP. I’ve been recording so much stuff but now I realize, I’ve changed so much in a year from where I was and I’m starting to think maybe I should take some time to record more. The project probably won’t be out until next year because I feel like I’m making so many more connections and I want to make sure I get the best out of it before I put out my best works.

Is there anything else that your fans can be on the look out for from you?

I would say with social media, I haven’t really been as active as I want to be. I just want people to get familiar with who I am. I want to pretty much reach out to people and interact with them more. I’m definitely going to be perfecting the music I’m making just so next year it’s bold and it’s there.

If you enjoyed our interview with Esther, check out our conversation with Shae Universe!