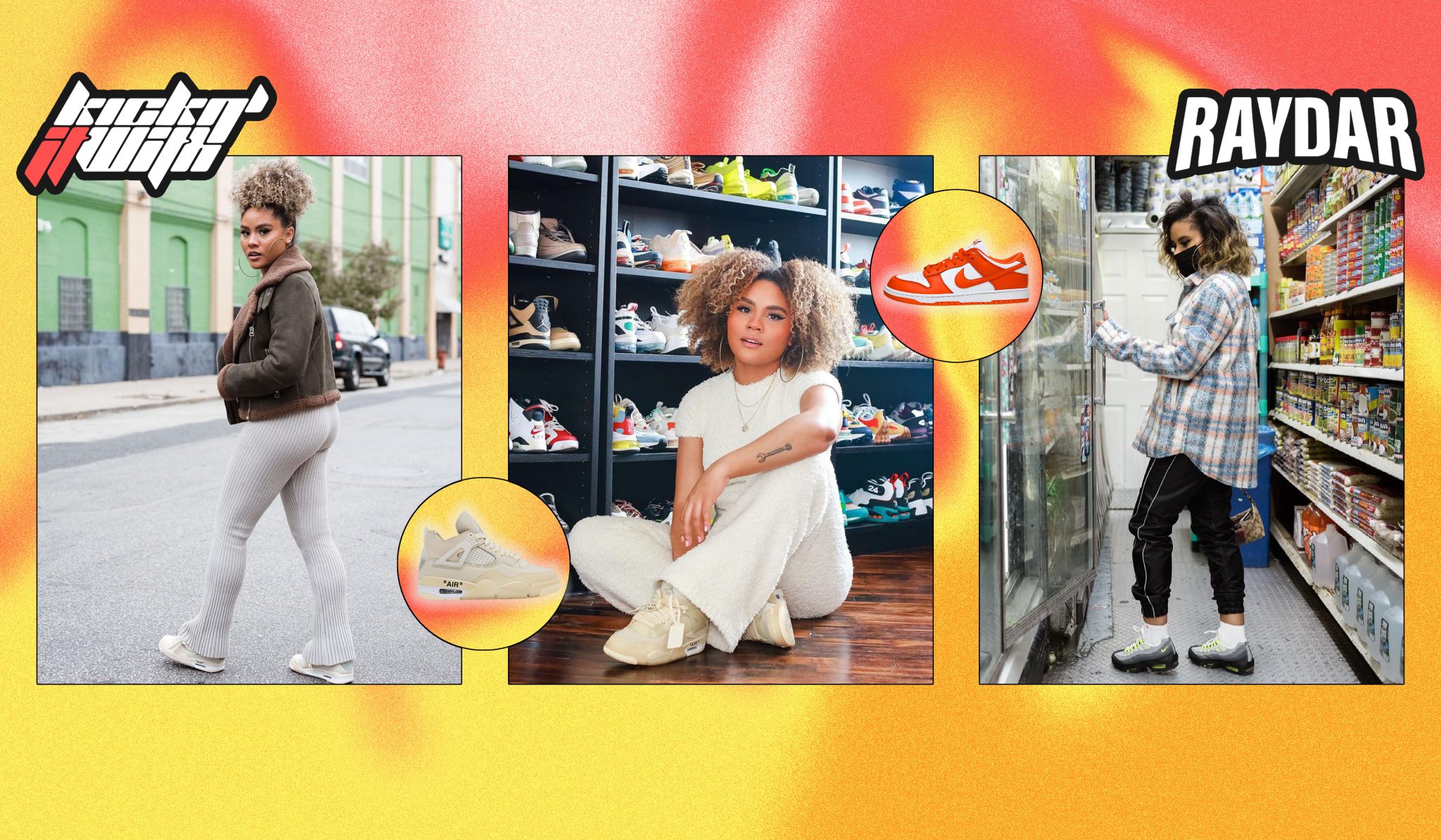 Kickin’ It With: Ashley Hall

A content creator that blends beauty and highly coveted sneakers, Ashley Hall is one of the most exciting sneaker enthusiasts that you’ll come across in the digital space. Having amassed over 70K+ followers across her social media platforms, Ashley navigates the world of sneakers and fashion with no fear.

Growing up in the Bronx, sneakers played a quintessential part in her life. The creative recalls wearing Air Force 1s and New Balance before getting her first pair of Jordans, the Air Jordan 2 “Chicago Away” in seventh grade and from there, her collection has grown well over 100+ pairs and counting. Ashley’s confidence and hard work has landed her partnerships with eBay, Nike, and Foot Locker to name a few. “I want women to be comfortable taking risks with their shoe pairings,” she tells us. “Not being afraid to step out the box and presenting themselves in an authentic way no matter what that looks like.”

For this week’s installment of Kickin’ It With, we chat with Ashley Hall about her love for sneakers, bringing together the worlds of beauty and sneakers, inclusivity, and much more. Read on for our conversations.

What got you into sneaker collecting in the first place?

I’m from the Bronx, born and raised, so sneakers are essentially second nature. I’ve been into sneakers officially since I was in elementary and junior high school. I wore Air Force 1s in fifth grade and I got my first pair of Jordans in seventh grade, and prior to that, a lot of times my mom and dad weren’t used to it. So release dates were something new to them and my mom really didn’t believe in spending $100 for a pair of sneakers for me.

The “Chicago Away” Jordan 2s are my favorite shoe because that was what initially to me into sneakers, but it was my mom that saw the sneaker first. Luckily, we got uptown and where I used to live, there’s a plaza mall and they had a Foot Locker and we went there. They were like “yo, we got rid of all of our stock or we didn’t get that many pairs.” Then we went to the Jeans Plus next door and I walked in and they had the shoe. When I tell you, I wore that shoe with everything and I didn’t care if it was raining outside. I wore them out!

How have things changed since you first started?

Like I said, growing up in the Bronx, it’s second nature. After seventh grade, it sparked something because I started building connections with people at my local Foot Locker. I would just pop in, talk about sneakers for a little bit, and they would tell me about sneakers coming in and from there the ball just kept rolling. I stopped collecting when I graduated high school and went to college and when I started going back to college, it started to get a bit harder. This was before the apps and all that, but raffles and trying to check out were the biggest thing.

I think when I finally started, I still walked into Foot Locker to pick up a few pairs. This was the year that the “Vashtie” 2s came out and the “White Cement” 3s and they were sitting on the shelf. That’s when the websites and stuff started coming into play and we know what it is now.

How many pairs of sneakers do you own in total?

I don’t really like discussing that for the most part, but I would say 115 give or take. Some of them have been in my collection for ten-plus years. It’s to a point where I’m afraid to wear certain sneakers because It’s nerve-racking what might happen.

For the most part now, I use Crep Protect when it comes to cleaning. I have used Jason Markk in the past but I find that the brush for Crep is a lot softer, which I do like. Crep also has these really good wipes. I also try not to wear sneakers with certain materials like velvet or suede during extreme weather. My leather sneakers, like my Jordan 1s for example, I’ll definitely wear those if it’s raining because you can easily wipe those off an call it a day.

You’re originally from the Bronx, but you recently moved to Philly not too long ago—what’s the biggest difference in culture you notice out there?

It’s been almost a year and so far so good, I don’t have any complaints. They love mids out here for one thing, I make jokes about that all of the time. Air Force 1s and New Balance are a big thing, but I also notice that they were a lot of designer sneakers. The McQueens, Balenciagas, Diors, and that kind of stuff are really popular here. But like I said, they keep mids alive out here.

Name three pairs of sneakers that you treasure the most.

That’s hard, it’s like asking someone to pick their favorite kid. Definitely, my Off-White 4s are a favorite. I do have a pair of Chicago 2s which I found on eBay last year. This is so hard! It’s a toss-up between my Chicago 1s and Syracuse Dunk Lows. It’s hard because I have things that I love about certain sneakers and even then, I know it’s certain things that I like about each sneaker.

The world of beauty and sneakers are so different from one another but also share similar elements, where do the two worlds collide for you and your content?

I don’t really look at the two as something that goes hand and hand. They work together so if you know me, you know my make-up is going to be done and I’m also going to have something nice on my feet. I enjoy my make-up stuff but I also enjoy my sneakers.

What are some things that you still find lacking in the world of women’s sneakers?

I hate when people say some of the women’s sneakers look better than men’s sneakers because we worked so hard to get here. I feel like even then, there’s a lot that has to be done. For women, we want exclusives but we also want access to everything else that the men have.

For example, I was in college, and the year that the “Olive” 9s were about to release, I was ready to cop. The smallest size at that time was a size eight in men’s. We want the access that men have, but also when it is a shoe that comes in a full run, I want my Swooshes to be in the same place. I like to use the men’s shoes when I’m talking about this because it’s the standard when it comes to the photos you see online.

When the shoe comes in a full family size run, and that’s the photo that they use, the women’s shoe might have the Swoosh in a different spot or the colors might be a bit different. Something is always different and I think that’s something that needs to be worked on. It’s more so inclusivity than exclusivity, and I feel like we have a long way to go.

Do you feel like we’re getting there or are we still far from seeing inclusivity within the sneaker community?

I would be lying to say that there hasn’t been progress made but it still goes over some brands’ heads. After a while, you kind of get tired of talking about the same thing. It’s like how long will it take before things change?

Obviously being someone who many people look to for inspiration and so forth, what type of impact do you want to leave through your platform?

Elsewhere in sneakers, Ottawa-based creator Mind of Malcolm walks us through his sneaker collection.