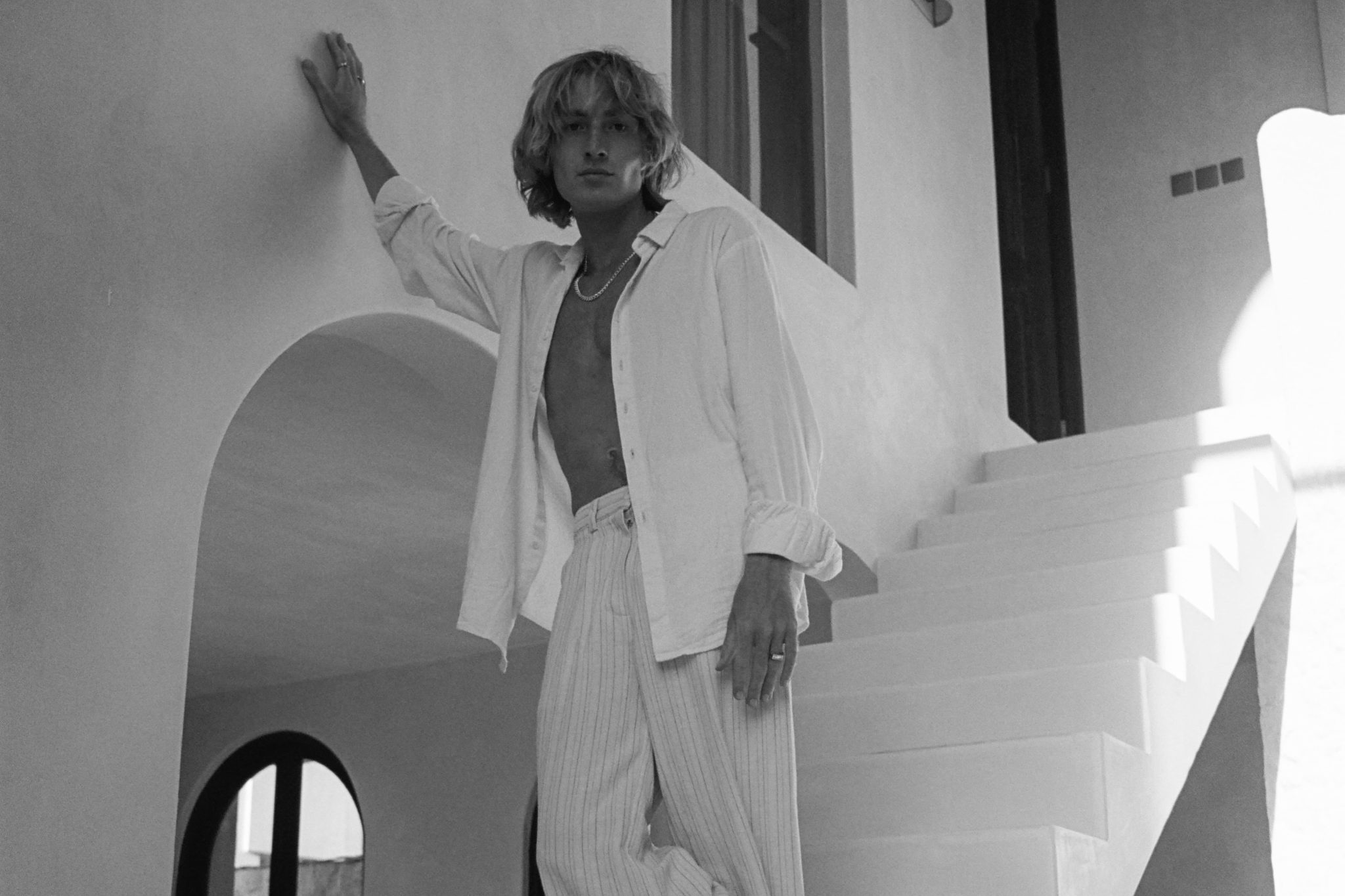 Jo Pesch Walks Us Through Tender Moments Behind The Lens

Luxemburg-born photographer Jo Pesch‘s tender photographs depict personal and intimate moments with his longtime girlfriend Noémie and the places they frequent. The series of portraits transverses across the globe from Cape Town to Bali to Europe, distilling the warmth of romantic love and leaning into natural environments that provide a look into the common thread that binds the many young cultures of the world.

“I think what initially pushed me into a creative direction was that most people at home follow the traditional path, and looking around me or going through school I couldn’t imagine myself doing anything like that. The thought of going to the same place to work every day, going for a drink, or going home to watch TV or some shit and doing the same things every day for so many years just scared me too much haha,” he tells us. Pesch continues, “So I tried a lot of things when I was 17, 18, 19, and videography kind of stuck with me which eventually turned into photography.”

With a focus on chronicling his life or constructing settings of a life that he would love living, Pesch pointed his lens beyond Luxemburg and captured the eccentricities of everyday life in and around other parts of the world. The artist has inadvertently established a sizable following through his photographs, many of which explore the modern utopia of beach days and endless summers. Using film as his primary medium for creative expression, Pesch says, “I just think there’s a real and organic element to it, and I of course like the nostalgic look that it gives. I also like the feeling that I get when I imagine the old times and I can’t really relate much to today’s world.”

Regarding his relationship and how it’s become a gateway for various opportunities, Pesch tells us, “I think apart from the convenience it also has an impact on the work we deliver, I mean shooting with a person that I love and know so well is just different than shooting with a  person I’ve never met and you sort of have to get to know each other first. It has also just put me in a  position where I shot much more than I probably would have if I didn’t have a model by my side all the time, which speeded up the process.”

Ahead, Jo Pesch walks us through some of his favorite works to date since embarking on his journey around the globe. From swimwear campaigns to shooting his first-ever magazine cover, continue scrolling to read about the photographer’s most-loved portraits.

This was a special one because it was our first remote campaign where Noémie and I got flown out to shoot their new collection. I remember getting off that call with the brand and talking to Noémie and realizing that we’d get paid to travel which was a goal from the beginning, it felt so good and like we were on the right path. We had a good time there and got along super well with the owner and her PR/campaign manager, who we stayed with at the same place. It was our first time in Formentera and we both immediately fell in love with the atmosphere there.

We shot this story on a super packed beach day in Clifton, like I mentioned above, the brand sent us the pieces and we produced the shoot for them. Like the name of the brand says, ‘old school swim’, that’s the look they wanted and something that aligns pretty well with Noémie’s and my taste. We looked for a vintage beach chair but couldn’t find a nice one, and when we arrived on the beach there was this group of 2 old couples, who had beach chairs that they bought in the ’70s or so, and I asked if we could borrow one for 30 minutes. They said of course and were so stoked and they took photos of us taking photos. and we ended up having a fun chat after the shoot.

Our first-ever magazine shoot. It was nice because I thought sometimes about shooting for magazines but never really put my time into it and mostly focused on brands. And then one day Noémie got a message saying that they’d love to feature her and that she could choose a photographer. So that job just came really unexpected and we had full creative freedom. Some friends from home came to Bali during that time and we stayed in a cool villa that we used as a shooting location. When they went on a little trip up north  Noémie and I just took the day to shoot around the pool and that was the story.

Noémie and I went to an island next to Bali with 2 friends, the other girl  Lente is modeling as well and they both had some Bikinis from a brand  We decided one morning to shoot a bit, the location was super beautiful and it was also one of those really effortless shoots where we could just be creative. We’ve sent the photos to the brand later and they were really happy to publish it and write a blog about our stay on the island.

We went on a little Road Trip with a friend from Cape Town who’s also a photographer, Wes, and we stayed in this cool Treehouse where we slept in this open, wooden,  bamboo place that overlooks the mountains in North Bali. Good times. That’s one of the shots.

One of our latest Campaigns from when we got back to Europe. We shot this in the South of  France which is a place, we’ve both been a lot and it feels super homey. It felt good to be back here after spending a lot of time in South Africa and afterwards Bali. People do nothing but tanning and eating good food here and the Mediterranean has this warm evening light and really unique blue tones. I love Noémie’s look in this photo, it reminds me a bit of the old swimwear magazines like in the 80s.

Over the past year, your artistry as a photographer has certainly evolved and taken a life of its  own. How would describe your work at this current stage in your career?

I appreciate you saying that. Well, things are really only starting to come together, to be honest. It’s only been over the last months that projects are more consistent. I only started shooting “for real” so to say at the end of 2020. Two years is not much as an artist to really find your style, so I’m still figuring things out and experimenting, but if I had to describe my work at this current stage: I first of all shoot everything on film—I  just think there’s a real and organic element to it and I, of course, like the nostalgic look that it gives. I also like the feeling that I get when I imagine the old times and I can’t really relate much to today’s world, its “problems,” and the overflow of information.

So film is nice because it makes you slow down in a world where everything has to go fast. So that inspires my work a lot and sort of defines the aesthetic that I go for. I find it hard to describe my work though because it’s a lot just about what feels right. A lot is also just documenting my life or creating settings of a life that I want or that I find exciting, everything sort of aligns with the things that I love in life, like beach days, good times with friends, the sun, aesthetic homes, the ocean, surfing, exploring new places—even when it comes to client work it’s mostly scenes and stories like that where the model simply wears the brand’s pieces. Sometimes of course there’s a guideline or a different concept to shoot but most of the work at the moment is within that lifestyle.

Moreover, the subjects and muses that you work with oftentimes blend seamlessly with your style of shooting. What compels you to work with certain subjects and environments?

I mean, I have to feel inspired or excited about the location or the person in some way and it’s more of a  feeling than a certain thing that I can describe. There’s no specific subjects or environments that I shoot or don’t shoot, I think that would put limits on myself. I either like it or I don’t. But there are certain characteristics that I lean towards and I think one can see that already when looking at my photos, like for example naturally beautiful people without a ton of make-up, natural bodies, I like strong characters or people that give off a  certain vibe that you can feel from far away. And when it comes to locations, I like characters as well.

The location has to give you a feeling and not feel empty or dead, like for example so many of those new square houses just look like you’re in Sims. Beaches are mostly a good choice, some more than others but I think the ocean is just the backdrop that you can’t go wrong with and everyone loves it. I love aesthetically pleasing villas or apartments. The small details when it comes to choosing furniture or accessories, the colors, etcetera. Again it’s about the feeling you get when you’re there. For example, high ceilings make you feel like you’re in a completely different place. There are so many variables I couldn’t go through all of it, but it just has to feel good in the end. And good lighting is a bonus too.

I think the subjects and environments blend in well together because it just comes together quite naturally, like say being in Bali you have this laid-back lifestyle where you run around barefoot all day and surf, and of course, you can find people there who align with this and fit this vibe and look. Or in Paris, you have beautiful apartments with a charming balcony and you find different models there that fit that vibe. So I think it’s a lot about “what’s in front of me” and usually it matches pretty well already and there’s no need to create crazy scenes.

In regard to finding your voice in photography and creating a community around your work, what advice would you give to younger photographers and visual artists?

I’m not sure if I’m in a position to give advice already haha, but I think it’s important to put yourself out there and create opportunities for yourself. You’re not gonna build a network by just sharing your work, but you have to connect with people and come up with concepts that are interesting and that other brands or people want to realize. You need to be able to see from their perspective and so what’s really important in my opinion is awareness. If there’s any advice I’d give to people that are trying to build a creative career or anything in life really, it’s to take the time to just sit with yourself sometimes and get clear about the life you want.

I think when your mind is all over the place your abilities are very restricted and you gotta find ways to tap into that clear headspace. For me, that’s for example writing down my thoughts, goals, and visualizing, having a smoke in the evening and just listening to music or being quiet, or sports. And yeah I’d say just trust the process, be honest with yourself and others, being a good person to be around helps a lot in this industry,  push yourself but don’t stress and learn to listen to your intuition, and don’t take life too seriously, at the end whatever you’re doing is supposed to be fun, you won’t be here forever.