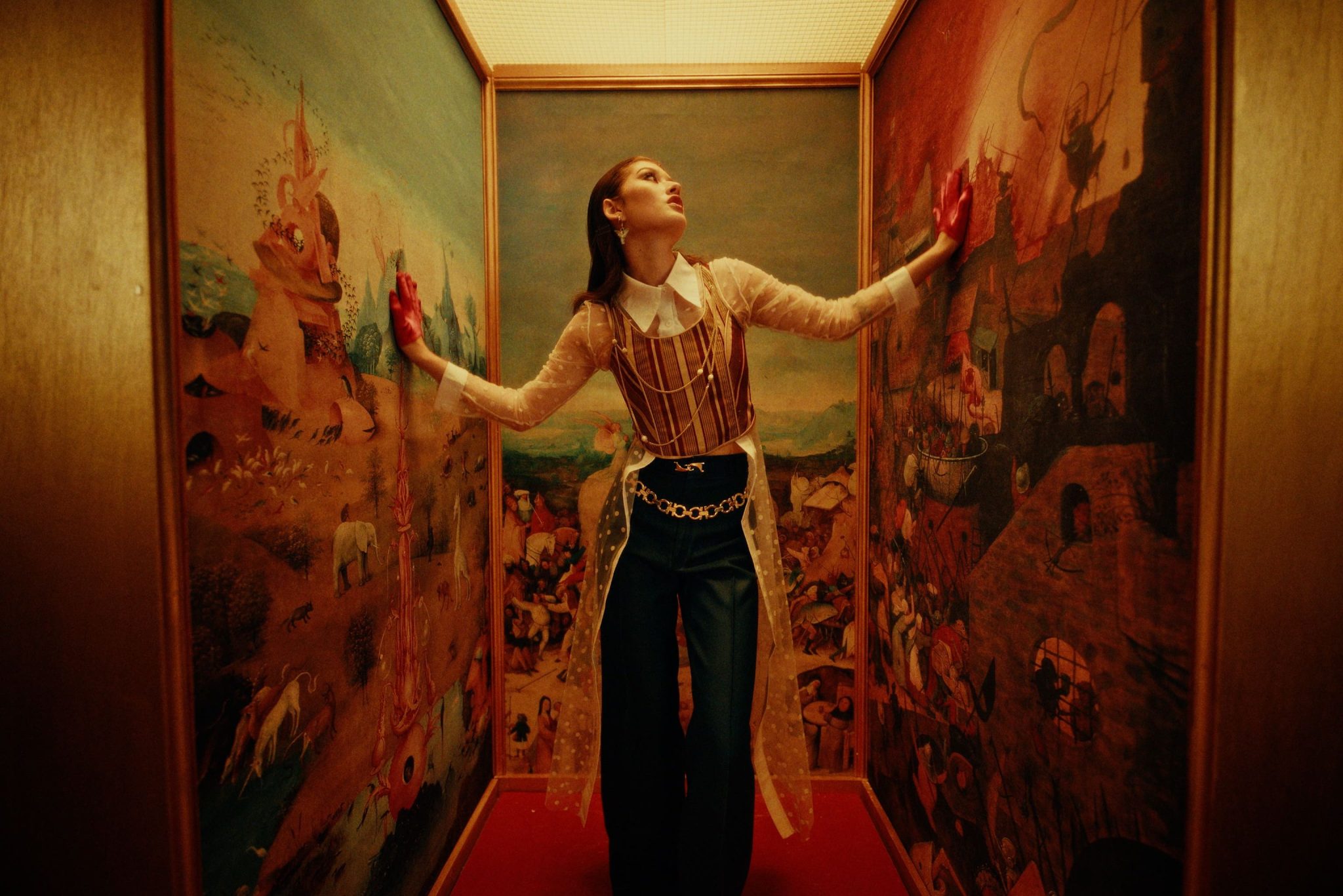 It’s immediately clear that Jade LeMac doesn’t pigeonhole herself into a singular genre or sound, and that’s what makes her music so refreshing. The 18-year-old singer-songwriter writes reflective soundtracks that mirror that of your greatest emotion—whether happy or sad, but then she comes up with choruses that are contrastingly joyous and energetic.

The Vancouver-based artists released her debut single, “Constellations,” in 2021 with much support to follow, gaining over 20 million cumulative streams to date. She continued with “Let Me” and March’s “Same Place,” both of which were joined by live iterations. Back in April, the burgeoning pop star won fans over with the release of “Aimed to Kill”—having accumulated nearly 300K views on YouTube, it’s a display of everything we love about LeMac plus more.

Jade’s latest offering comes in the form of “Meet You in Hell,” a scathingly insightful dark pop song on the aftermath of an abusive relationship that serves as her first release under a new partnership with Arista Records. “song written about karma, anger and revenge. Being in a relationship where you’re getting the shorter end of the straw is exhausting, and being hurt by a person you care so deeply about is traumatizing. This song is written from the point of view of someone who is tired of being hurt,” she shares. Additionally, the song is joined by a visual effort fitting for the season that effortlessly combines the lyrics and their meanings.

On the heels of her new release, we chat with Jade LeMac about the new single and accompanying video, putting records together, signing to Arista Records, and more. Watch “Meet You in Hell” below and continue scrolling for our conversation.

Hey Jade! How’s this year been treating you so far, both musically and personally?

Hi! This year been great so far. There have definitely been some challenges, but I think I have grown a lot as an artist and person, so I am very excited for what’s to come.

Can you talk about your early music influences and how we can hear that in your music now?

There are so many influences I wouldn’t know where to start. If I am feeling something, I usually just run with it. One day I could be writing a song that is similar to Shawn Mendes or James Arthur, and the next I’m writing a song pulling influence from The Weeknd. It really just depends on how I am feeling!

Let’s talk about your song “Meet You In Hell” that you just released. I was listening to it and it has this haunting sort of otherworldly sound to it. Talk to us about the inspiration behind it and how the song came to be.

The inspiration for “Meet You in Hell” started with the title. I knew it could be a great title for a song, and so I wrote a couple lines – once I had that, then I really started to use my imagination and came up with an entire storyline with characters and a plot. I pictured this person in my mind wanting revenge after being treated poorly in a relationship. The song is written from their perspective and how I imagined they would be feeling.

The visuals were very fitting as well, from your wardrobe to the setting and everything in between. How do they complement the overall message of the song and what was it like putting the record together?

The visuals made the song really come to life. Everything from the wardrobe, sets, colours, effects, and execution gave in to the darkness of the song – yet it really leaned into the badass aspect of it as well. I think it turned out great, and it was such an awesome experience all together.

Prior to that, you obviously won us over with songs like “Same Place” and “Aimed to Kill” earlier this year., the latter of which carries some of those ghostly elements. Where does this record fit in where you aim to establish your sound?

I think “Aimed to Kill” was such a big discovery for myself personally because I learned a different side to my writing that I didn’t know about before. I discovered how harsh, and hidden I can be with my metaphors and how much fun I can have when writing. Being able to write such dark, creepy lyrics, but have a whole meaning hidden beneath it is such a fascinating way to write a song. I believe I learn more and more with each song I write, and every song helps shape my sound.

As a young artist, you’ve released several songs independently before you partnered with Arista Records on “Meet You In Hell.” What do you look forward to most under this new venture?

I’m really looking forward to releasing more music of course, it’s really great to have such a supportive and iconic label behind me. There’s so many great artists on the label so I am excited to be part of that roster and all the opportunities that will come along with it.

Are there any sort of specific rituals that you perform when you’re writing something new?  How do you get into that headspace of writing these ever so relatable songs?

Something I do very often when writing is to just jam out and not even think about anything. I sing whatever comes out of my mouth, often times I don’t even know what I’m saying so I have to be constantly recording on voice memos. When doing this weird process, I can tell right away when something feels good. That’s when I’ll listen back to the voice memo and start working off that idea.

How are you able to translate these varying inspirations into your own work in music? On platforms like TikTok, we get to see a more vibrant personality of yours that wouldn’t particularly be apparent through your songs.

Something I’ve always believed in, is being yourself. On social media, I like to post whatever I want to post, and just be me. But when it comes to music, I I can be anyone or anything I want to be – whether it’s a character I made up and an entire story, or it’s me and my real experiences. Music is art, and I get to express different sides of me through that.

With that in mind, how do you practice self-care—both within the creative process, and personally?

Self-care is so important to me, and there’s a few things I do to keep myself in check. The first thing that I do is go to the gym or get some sort of exercise in. That helps with my energy and how I feel for the rest of my day. Another thing I do is to make sure I spend time with the people I care about. They always make me laugh, and keep me grounded in a way. Whether it be going to the arcade, movies, or just staying it home. When I am in a positive mindset, it helps both my creative process and my personal life.

Pivoting back into music, what do you look forward to as your fan base and catalog continues to grow?

I’m looking forward to sharing some more music and releasing an EP, performing live, and really connecting with my fans and followers. I think I’m also just looking forward to growing musically and personally, and learning more about myself and this industry.