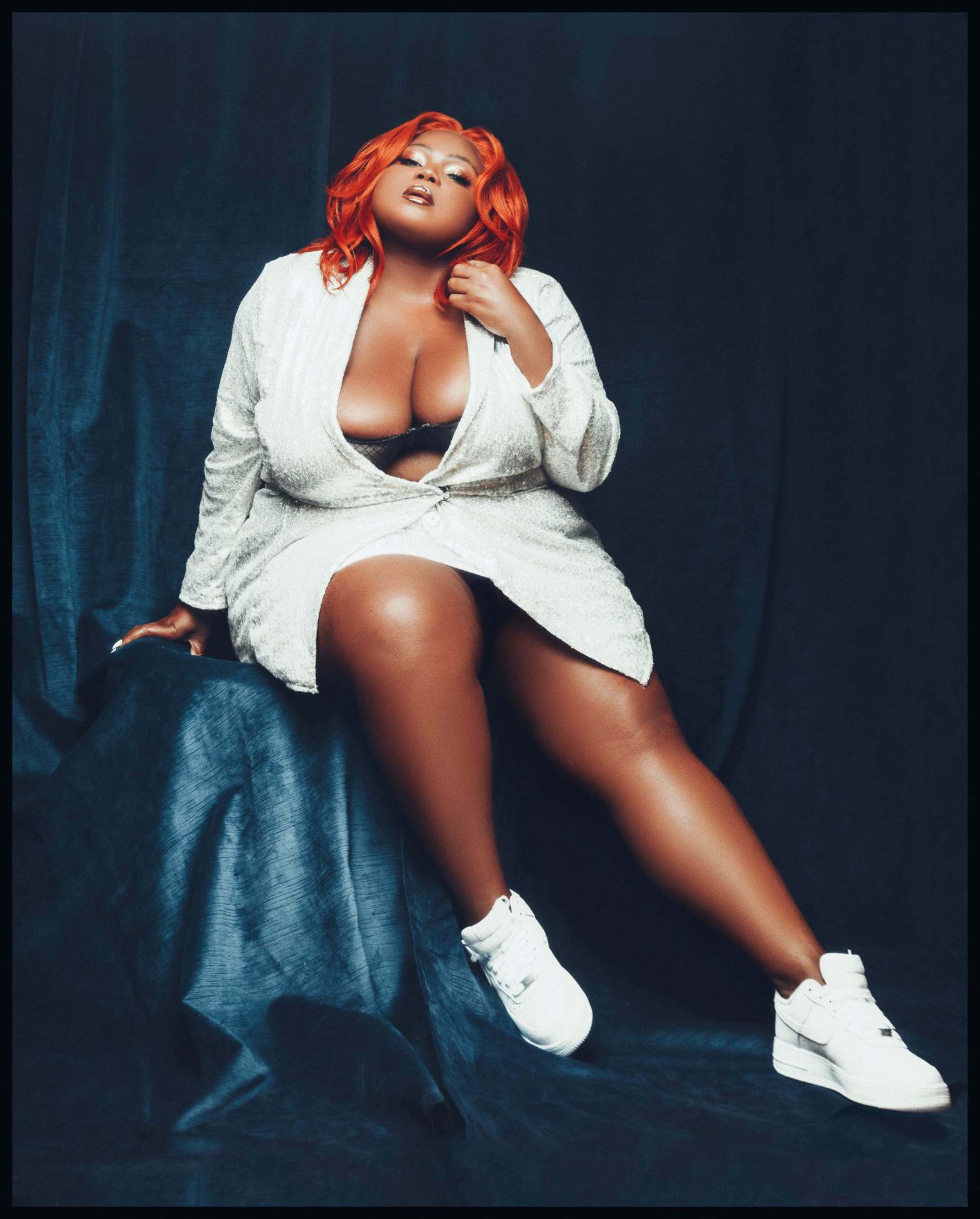 Coined as a hybrid between Pop and R&B, LU KALA appears is destined to break the mold. The fiery voiced songstress—with signature vibrant orange hair to match—has been making big waves across the music industry for the past several months. Not only in her hometown of Toronto but international audiences as well.

At the early age of three, Kala’s family immigrated from the Democratic Republic of the Congo to Canada, first living in Toronto’s Regent Park, and later Ajax. She is gifted with a talent for writing striking pop tracks and memorable hooks. It’s a talent that helped bloom the rising star as she wrote for several for local artists, as well as R&B star Jennifer Hudson in the early years of her career.

Despite finding plenty of success in songwriting, the world meant for LU to be something more. Behind the lyrics was a voice waiting to be released, a voice that didn’t conform to the vocal style producers assumed they’d hear. Thus KALA embraced her distinctive sound, transforming her trajectory as an artist, and a woman, in the process. “When you’re the artist, you learn to tell your own real stories through song. Which didn’t come naturally to me,” she tells us.

Since her 2019 debut, “DCMO,” the songstress has amassed a vast audience unlike any other in Toronto. Today, she finally gets to bring forth her much-awaited EP, Worthy. It takes an unflinching and unapologetic look at love, heartbreak, and self-worth. With a voice that often forgoes perfection for unvarnished emotion, Kala is an artist with the ability to redefine what pop music sounds like. To count her out is futile.

“I go for the throat,” sings LU KALA on her debut, and so do her lyrics. Unflinching in its honest examination of love, lust, and hard-earned self-worth, Worthy shoves fear aside, choosing the kind of laid-bare songwriting and raw emotion that births superstars. Check out our exclusive interview with the budding Congolese Canadian songstress below.

Before putting out your debut single, you were a songwriter. How would you compare that experience in contrast to taking the limelight as an artist?

The difference between being a songwriter and artist is when you’re writing you don’t get to put out the song. It’s not your responsibility. You can lend your feelings, stories, and emotions to an artist or put yourself in their shoes to write about the place they’re in or where they want to be. When you’re the artist, you learn to tell your own real stories through song. Which didn’t come naturally to me. But after my first single “DCMO (Don’t Count Me Out)” I knew that I preferred telling my own stories because it was bigger than me, and I needed to do it to free myself of insecurities. I get to be the face of all my stories.

Being a Black pop artist coming out of Toronto, is your city pretty accepting? What are some of the challenges you faced during the initial stages of your career?

I love Toronto, that’s home to me. It took a bit of time for people to get it. I come from a city filled with so much talent in the R&B and hip-hop space, which has heavily influenced the city. So to be a black woman in Pop and plus-size at that from Toronto, it took a bit for people to digest it because that’s never been seen before. Even amongst musicians, it was weird being in sessions at times because people wouldn’t get why they’d invite the pop girl. But just because I exist in the Pop world, that doesn’t mean I don’t understand r&b/hip-hop melodies.

Toronto doesn’t have a big pop scene, so many times on bills I’d be the only pop artist on stages and I feel like people always wanted me to prove myself. I think any time you come with a different sound or a different anything in life that people aren’t used to, you may be met with push back. I’ve always been different so I don’t plan on changing now. I have orange hair for goodness sake. It’s funny though because a lot of people who love my music were shocked to find out that I was from Toronto let alone Canada. I popped up out of nowhere in the scene but definitely made a presence and I feel like I get a lot of love from home now! Hopefully, I can inspire more people to live how they want and not change for others.

How do you overcome those challenges?

The more I developed my sound, the more I stopped caring for people’s negative opinions. People in the industry told me not to label myself as Pop because saying Pop doesn’t sell and that Pop artists don’t have real fans. Which made me insecure about my music, and for a second it made me wonder if I should force push myself into “Urban” genres. Pop music has just always felt like the space that my voice lives in. Now I can walk into any room and feel like I’m worthy of being there whether or not I’m too Pop for some folks! The more consistent you are the more confident you become. And you face less challenges because people tend to support someone that they see moving, which is life.

You’ve already reached success at a young age. Do you ever feel pressured to establish yourself in the industry, or are you taking more of a fluid approach?

I definitely have days where I feel pressure to be where I want to be in 10 seconds. My anxiety gets the best of me about certain things and I’ll wake up at 4am texting my manager like “Did we do this?” Which we obviously did, but I want everything to be perfect. Other days I’m super fluid and go with the flow and just let things happen. I feel like if you want something bad enough, sometimes the pressure comes with it. These things take time so I try to remind myself that everyday, and just focus on the music. That’s the only thing I can really control, the rest will workout itself cause my team is great.

How does it feel to release your debut EP, Worthy? What’s your favorite track and why?

I’m super excited! I feel like I’ve been working towards this forever so the fact that people will hear a full body of work from me, makes me emotional! My favorite track, that’s so hard, that’s like asking which of my children are my favorite! But if I had to choose, I’d go with “Love Shit.” That song is just so real and raw. I tackle my insecurities in the most blunt way possible. I mention things people have said about me, or the reasons why I think I’m still single and how people see me. It’s kinda dark, but every time I perform that song live and strip myself in front of the audience and feel their love, I’m reminded how Worthy I am and that I’m supposed to be right here. All the records on my EP share pieces of me from the emotions I battle. From how sassy I am towards men to my self love so I love them all for different reasons.

You traveled quite a bit while working on this particular release, how has being in different environments influenced you to step out of your comfort zone?

Writing this project helped me step out of my comfort zone because now I walk into rooms and I’m not afraid to get into my story and share emotions right away. I wasn’t like that prior. I wrote the song “Love Like” in a Hotel room in London with a bunch of strangers. Which at the time, I promise you I would have never thought of doing that before. I think great things happen when you walk out of your comfort zone and great connections are made as well. Every time I get to be in a different environment, I’m inspired as those are the moments that help me grow. Experiencing audiences and everyday people in different cities and countries has made me a better person and artist.

As your fans begin to delve into the project track by track, what do you want them to take away from this listening experience?

Are there any dream artists you’d like to collaborate with in the future?

I need Rihanna to call me whether she wants me in her Savage x Fenty fashion show or to do a song with me. Either way I need my good sis to call me! So many others though from Sam Smith to Clean Bandit, Diplo, Drake needs to hop on a pop bop with me whenever he’s ready. Dua Lipa, Calvin Harris, Justin Bieber, Victoria Monet, Arianna Grande, Raye, Burnaboy for all of Africa! The list goes on!

What advice would you give other nontraditional female artists starting out in the music industry?

Do whatever you want! People will doubt you, they won’t get it, they’ll tell you that you aren’t marketable but you truly can’t please everyone. Cliche, but what’s meant for you will always be yours as long as you never stop growing and keep working! If there was ever a time to truly be yourself it’s right now, so get it together sis and show the world what you got!

With your EP in the rearview, what’s next in store for you?

I’m so excited for music post-EP. Most of the songs on the EP I wrote at the end 2018, when I had just got on the scene. In 2019 and this year 2020, all I’ve done is write so I cannot wait to release the music that’s representative of me this last year. Some fun songs, some anthems, a couple ballads because all I do is cry at the studio. I don’t know what the world will look like next year but I can’t wait to start performing in packed venues again, I’m so looking forward to that. There’s so much more on the horizon but y’all will have to tune in to see all of that.