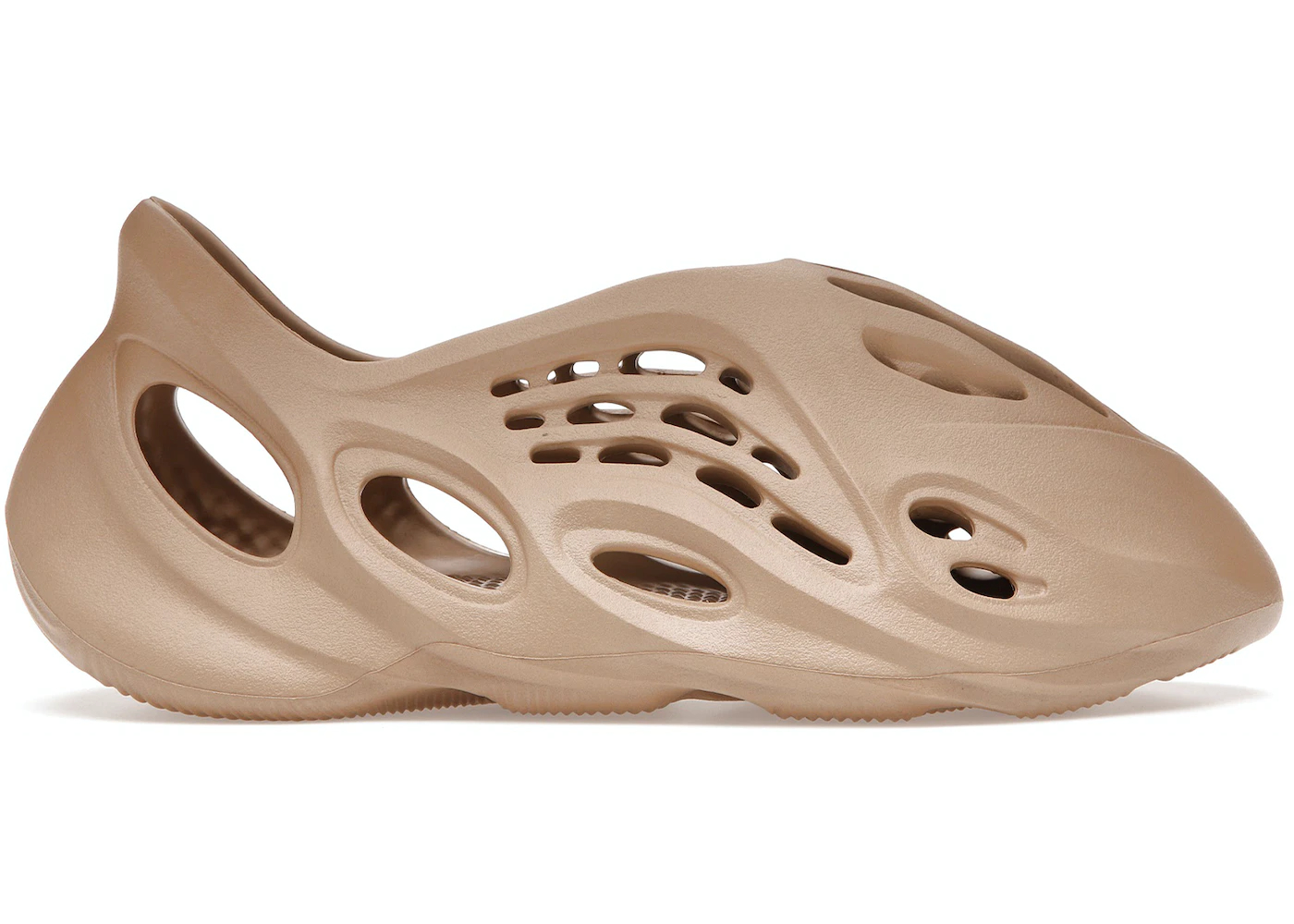 The Yeezy Foam Runner, stylized as Yeezy Foam RNNR, has become one of the brand’s most celebrated silhouettes despite its uncomplicated build and straightforward colorways. Originally released in 2020, the shoe debuted during the global pandemic as standard sneakers seemingly took a backseat in favor of more comfortable shoes like clogs and mules. The sneaker was widely dubbed the “Yeezy Croc” before launch due to its similarities to that of the renowned foam clog label that shot into popularity in recent years.

Each color scheme for the shoe is made of a sustainable algae-based EVA foam that features large oval perforations on the heel and midfoot, plus smaller dotted detailing atop the foot. The cut-outs enable airflow for ventilated comfort whilst the material is responsible for the Yeezy Foam Runner’s lightweight feel. Elsewhere, the interiors allow for the wearer to pair these with their favorite pair of socks or without. Releases can be snagged using the adidas CONFIRMED app, which was created to give sneaker lovers alike a fair chance of picking up the latest sneaker releases, as well as partnering retailers like Yeezy Supply and others.

Continue scrolling to check out some of the latest—and earliest—Yeezy Foam Runner releases in addition to where to purchase them on resell platforms and retailers.

Serving as the silhouette’s debut color, the Yeezy Foam RNNR “Ararat” formally introduced sneakerheads to the molded slip-on. It features a white-based hue that dominates the color scheme whilst holes and ridges pull inspiration from the Yeezy 700 V3. The shoe was initially released on June 26, 2020, and unlike subsequent drops, the “Ararat” colorway has not received a reissue thus far.

The “MXT Moon Grey” Yeezy Foam RNNR differentiates itself from other colorways with a two-tone build that’s comprised of a tan-like hue on the bottom and a grey color that takes over most of the uppers. The combination provides a unique look that ultimately comes front and center on the outsole. Meanwhile, its textured interior is equally comfortable and eye-grabbing. This particular colorway was released on March 26, 2021.

Released in tandem with the “MXT Moon Grey” colorway, the Foam RNNR “Sand” sees a slightly darker tan shade than the shoe’s inaugural hue. It follows the same scheme as previous silhouettes, sticking to a natural color palette over some of the obtrusive releases seen in both the Yeezy Boost 700 and Yeezy 350. Though the sneaker came out on March 26, 2021, it also got a restock the following year on June 11th.

Released on May 29th of the same year, the Yeezy Foam RNNR “Mineral Blue” features a similar two-tone color scheme with the titular hue being complemented by black on the uppers. Neutral monochromatic finishes and the sneaker’s sculpted lines give off a futuristic aesthetic that can be said about several other colorways. The shoe was released in both adult and kids sizing with the former retailing at $80 USD upon its debut.

The “Ochre” colorway falls along the lines of Yeezy’s monochromatic hues, serving as an earthy pigment that’s fitting of the Fall season. The dark beige construction remained the same as previous Foam Runners, using EVA foam made from harvested algae and cut-outs throughout. Since its release on September 18th of 2021, the shoe has certainly been christened by footwear lovers alike and paired with earthy-toned fits and socks.

The “Vermilion” is a vibrant red hue that is likely to catch people’s attention when they see it on feet. It is a contrast from the more subdued colors seen in previous Foam RNNR designs, including the “Mineral Blue.” These clogs could’ve technically been dubbed the second coming of the “Red Octobers”—a callback to 2014’s Nike Air Yeezy 2 “Red October” which currently retails upwards of $12,000 USD. It was released in October 2021, retailing for $80 as is customary for the silhouette

adidas YEEZY refilled their Foam RNNR “Stone Sage” slip-ons for April 22 after an original sale on March 11. Tonal gray streaks mimicking drying clay works are supplemented by the footwear label’s distinctively carved shapes and oval-shaped holes. Stone is the dominant color in the lightly painted palette that is barely perceptible throughout. It carries on Ye’s fascination with the tan color scheme, much like may before it and after it did.

The Yeezy Foam RNNR “Sulfur” dropped in April of this year. This slip-on shoe option maintains the one-color design by arriving in a yellow that is comparable to the 450 “Sulfur” colorway that we saw a few months ago. Kanye West’s distinctive sneaker once again makes use of an earth tone, which gives the shoe a crisp tonal appearance. The pair avoids the MX-styled patterns of more recent releases while maintaining a familiar construction and tone. As opposed to using the aforementioned color or the “Ochre,” the titular shade is applied to the whole exterior and is a brighter tan color.

Since Ye’s slip-on shoes initially surfaced online some years ago, fans have pleaded for an all-black version. The whole shoe, from the permeable top to the oddly curved tread underfoot, is covered in “Onyx,” which isn’t fully pitch-black. At his “DONDA 2” live performance in Miami, Kanye West made the initial unveiling. West’s co-signed goods, including the Yeezy GAP developed by Balenciaga and the first Yeezy Foam Runners, were on display for the first time on February 22, 2022. The shoes received a wider release on June 8th with several more color schemes in the works.

On June 11th, the “Desert Sand” hue was offered in a full family rune. The shoes don’t reinvent the wheel, choosing a neutral light brown shade over its top and sole unit, which is somewhat evocative of “Ochre” ensembles that have taken over not only the porous pair but also the Yeezy Slides. The following Ye-backed item is free of paint streaks or marbled effects and offers a diverse product that is likely to appeal to a wide audience.