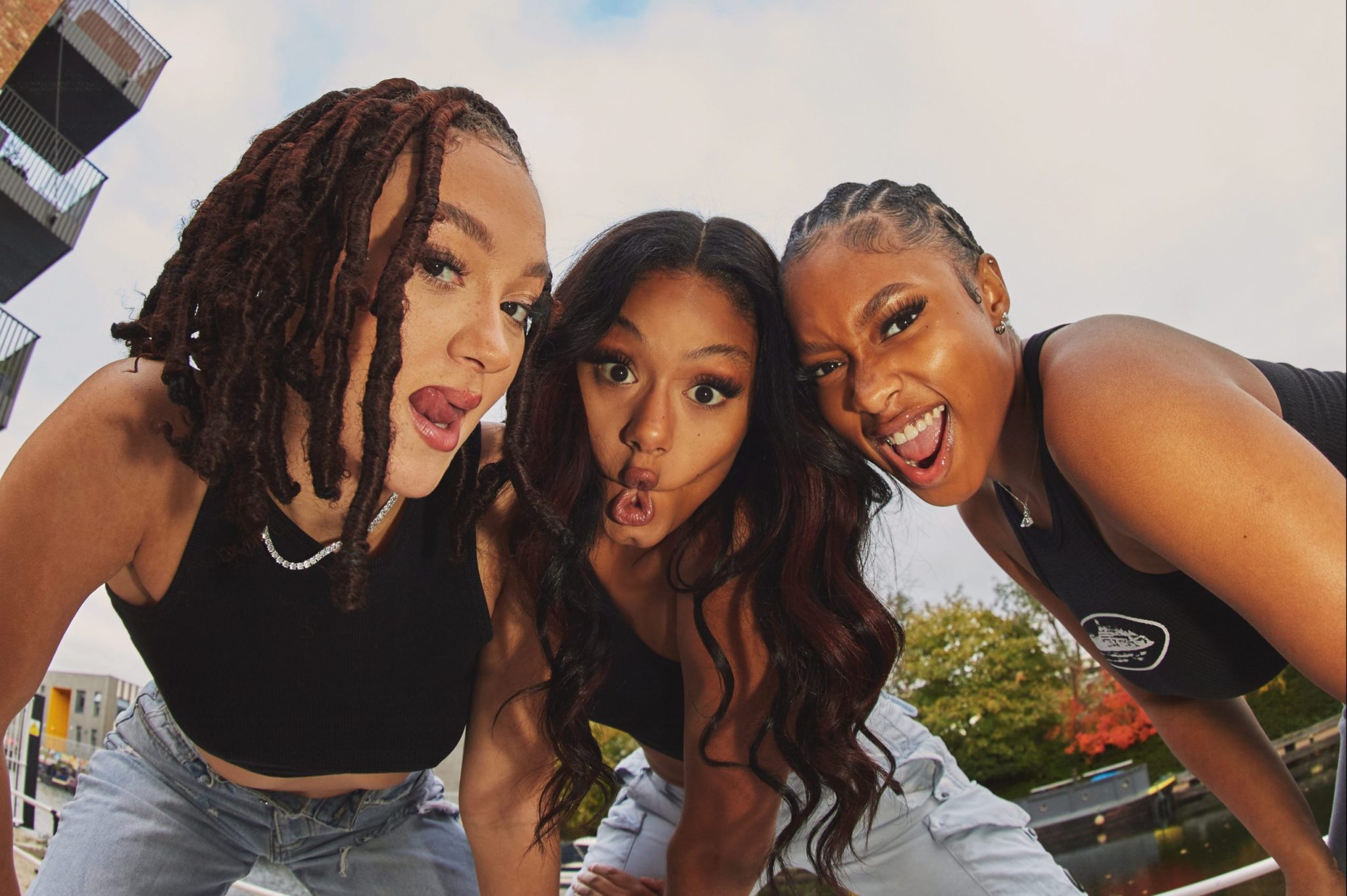 Ever since their debut single “Cardboard Box” surfaced on Twitter, girl group FLO has been dominating the charts with a cult-like fanbase to support each new release. They’ve accumulated a number of accolades and achievements in just a short time, widely being christened as the revival of R&B girl groups.

The trio—Jorja Douglas, Renée Downer, and Stella Quaresma—certainly live up to their praise, cleverly drawing references and influence from classic old-school R&B whilst interweaving it with that of the contemporaries. Stella and Renée originally met each other at school in London, bonding over music and their love for singing. Meanwhile, Jorja was born in Germany and grew up in Hertfordshire, and was on her own musical journey before the group formed. Prior to their upstart, FLO spent the past two years honing in on their songwriting abilities and vocal prowess with several Grammy-nominated singers and producers.

“Cardboard Box” captures the essence of a group at the helm of their music and visual identity, detailing their shared experience of heartbreak over MNEK production. The record subsequently garnered 3 million views on YouTube and over 10 million global streams across DSPs. To further add to FLO’s monumental success, the song was lauded by the likes of SZA, Victoria Monet, and Missy Elliot among others. Pivoting off of their debut record, “Immature” came weeks removed alongside its accompanying music video, following in the footsteps of its predecessor with 600K views to date. The song, which arrived in tandem with the group’s EP announcement, is complemented by crisp metallic beats and undulating earworm melodies.

The Lead continues to build on FLO’s viral triumph, comprised of five irresistible tracks that traverse across neo-soul, R&B slow jams, and summer anthems. According to the trio, the project “represents personal and professional growth because it’s taken so many twists and turns.” They add, “We are young black women navigating life and musicians finding our voice and sound through R&B.” The EP charted in the Top 100 of over 36 countries on Apple Music, featured on Spotify’s New Jams playlists, and gained praise from fans alike.

On the heels of their critically-acclaimed EP, we chat with FLO about Twitter stans, emerging fashion labels, standout cuts from the project, and what they look forward to next among other topics.

Congrats on the new project, everything sounds really great from the production to vocals. How do you feel?

Since the EP’s release, you’ve been compared to TLC and Destiny’s Child, charting in the Top 100 in over 40 countries on Apple Music, and several celebrities have shown their support. Is there anything or anyone that has shocked you the most in terms of accolades or co-signs?

Renée: The charting stuff to me is crazy. I didn’t even know that was going to happen.

Jorja: I’m not going to go too crazy because it’s iTunes. It’s not like Billboard 100 charts, but it’s a step in the right direction. This is what we worked hard for. To me, the craziest thing is the Twitter stans. It’s one of the best things and one of the most surprising things. People love to get in early so they can grow with you which is really nice.

I love the music video for “Immature”—everything from the black backdrop to the flattering outfits really allows it to shine visually and musically. What’s the story behind putting the visuals together?

Stella: We sent out a brief of the vibe we wanted for “Immature.” From the beginning, we had a vision for what it would look like so it was cool to get the treatments back. When we saw the visuals, we were like, “yeah, this is a vibe.” It came out really well.

Another element that I find to be really phenomenal is how you all have your unique styles rather than conforming to one another.

Stella: I think we are different people so we’re very authentic to who we are as a group, but also individually. It’s not like we have to put up a facade. We’re also similar in ways and that makes it works. Both of those things work together really well.

Does style empower each of you individually when it comes to making music?

Jorja: For me, not so much. Making music is the most important part and everything falls in the suit of that. If the music doesn’t feel right then everything else with it won’t either. When the song is so good, you literally think in your head: imagine the outfit and choreography for this song. If the song’s not hitting, you don’t have that spark.

With that being said, are there any fashion labels that you ladies really love at the moment?

Renée: We like a lot of up-and-coming brands in the UK like 1XBLUE, Tora-Lily, and NiiHai. Lots of smaller brands and then obviously bigger ones like Prada. We love clothes.

“Summertime” is a phenomenal record that provides a bit of contrast to some of the other songs from the project. What was the inspiration for that song?

Jorja: Then she got a boyfriend, and it didn’t happen!

Stella: Sometimes we’ll go in and have things that we want to write about. We don’t make stuff up because it’ll be cool, but we definitely can fabricate things. There are certain things you can push and pull with!

One of you could be dealing with heartbreak while the other two are happily in love—how do stay on pace with each other.

Jorja: It’s happened to all three of us so we can say cool, “let’s put that hat on and write about that.” Obviously, at some point in your life, the song is going to become relevant. Even if I’m not feeling that way, but Stella is, we need to channel it for her. I’m sure one day that song is going to do me a lot good.

Out of curiosity, how do you all pour into one another and keep the creative juices flowing?

Stella: It’s good that there are three of us because sometimes if someone is not feeling, chances are someone else will be. We have really good dynamics with the people that we work with so we usually end up with something pretty good.

Renée: They’re amazing, they know so much! Like who is sitting behind there and finding all of this information.

Jorja: Also, they set the tone and control the narrative. Obviously, if you don’t have these people supporting you and you’re exposed to Twitter, it can be really dangerous and get out of hand. When you have your fans, they can go in and be like, “this is FLO, they’re amazing” and people follow behind them. They know how to keep it cute.

Do you ever worry that they might know a little too much about you?

Renée: It’s really scary to have so many eyes on you and so many people in your business so it definitely can get scary for me.

Jorja: Not really. As long as I’m being true to myself, it’s cool. I don’t really have any secrets that they don’t need to know so far.

Talk to me about “Feature Me,” it’s another great record off of the project that

Jorja: That’s our favorite song. It’s up there with my top songs. It’s everything that we have listed to, grew up on, and want to be in one song.

“Another Guy,” the final song off of the EP, was performed live ahead of its release. What was the motive to put the acoustic version on the project rather than the studio version?

Jorja: The studio version wasn’t ready. It was on the lineup and all of the songs we had worked so hard on, but we felt like it stuck out compared to the other songs. We didn’t want that song to get the reception it deserved and be the throwaway song of the EP. We had the acoustic version and we were like let’s put that out because it gives us more time to work on the studio version if we ever decide to release. I think we made a good decision.

Renée: In a good way!

With The Lead in the rearview, what are ladies looking forward to next in your career?

Jorja: More music, meeting new people, getting out there more.