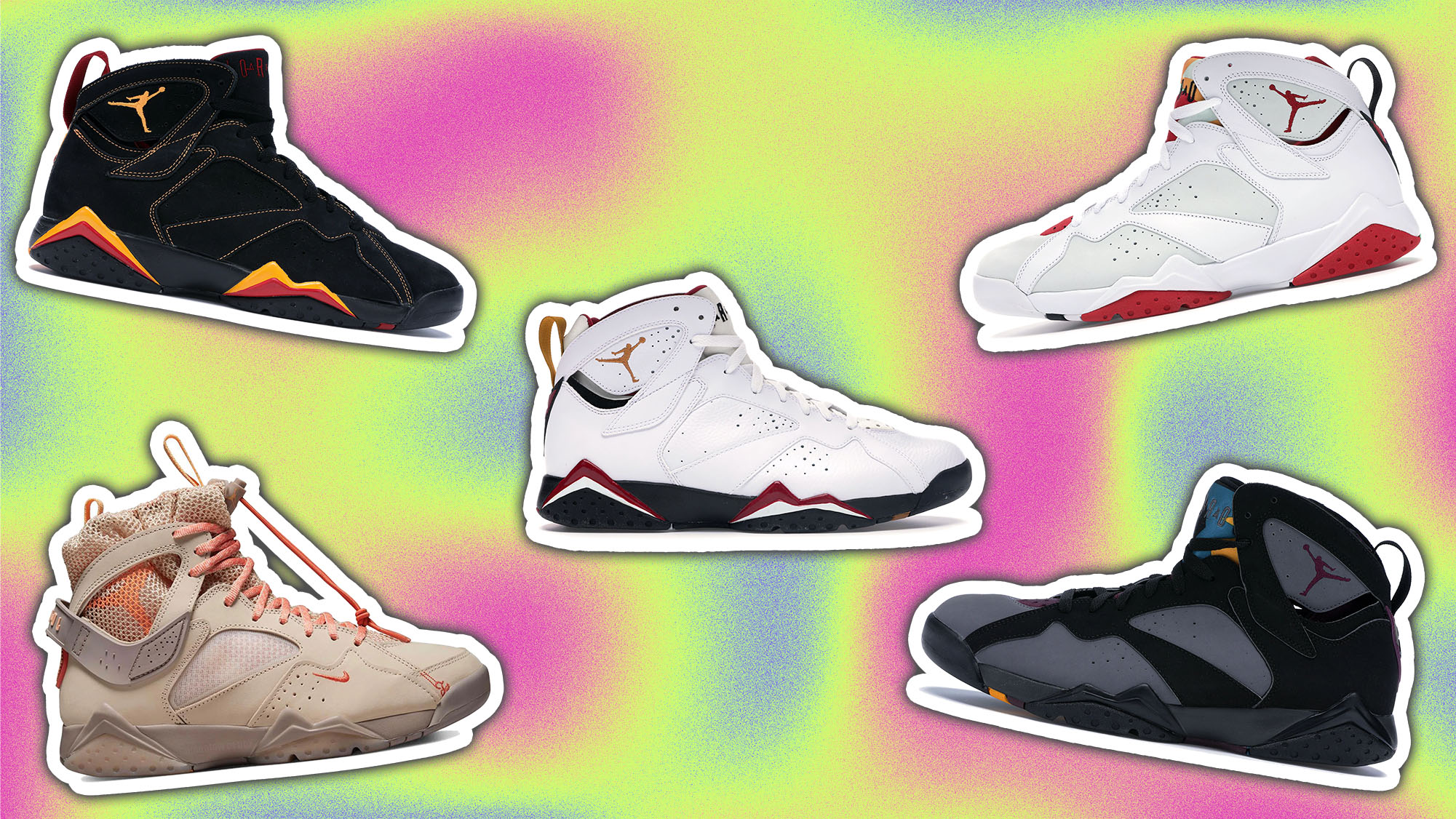 A Shoppers Guide To The Air Jordan 7: Ranked & Reviewed

Shoe-wise, Michael Jordan’s Air Jordan 7 marks a major turning point. In 1992, when MJ wore the model, he won his second NBA title and led the Dream Team to Olympic gold. Tinker Hatfield’s design for the AJ7 incorporates colorful geometric motifs on the top and outsole as a reference to African tribal art and culture. The shoe’s inside bootie structure provides a Huarache-like fit, while Nike Air cushioning and large Jumpman branding round out the design.

As far as on-court performance goes, the Jordan 7 is arguably the best early Air Jordan. When compared to earlier generations, they are an all-around superior shoe in terms of comfort and performance, thanks to their superior cushioning, grip, materials, and fit, as well as their exceptional breathability and enduring stability. Several colors of the sneaker were introduced upon its first release, including “True Red/Raptors,” “Hare,” “Cardinal,” and “Bordeaux.”

Below, we delved into some of the silhouette’s most prominent releases from its 1992 debut to its 30-year anniversary colorways that pay homage to both the past and present. Continue scrolling to get familiar with the array of colorways and their significance to sneaker culture.

The upper of the Air Jordan 7 OG “Hare” is constructed of white leather with muted silver detailing; the shoe also has holes for ventilation along the side panels and ankle; and the midsole, tongue, and Jumpman emblem are all colored red. Hints of mint green, yellow, and black can be seen on the tongue and underfoot, the latter of which boasts a purple Jumpman logo.  Bugs Bunny laced up a pair of Michael Jordan’s Hare Jordans in a classic advertisement from the 1990s to get even with his tormentors, further popularizing this color scheme. In 2015, for the Air Jordan 7’s 23rd anniversary and as part of the “Hare Jordan Collection,” it made a comeback.

The 2002 Air Jordan 7 Retro “French Blue” has a simple yet recognizable color-blocking evocative of the many OG models launched a decade beforehand. The upper is constructed entirely of tumbled white leather, and it has the same streamlined toe box as the Jordan 6. The traditional Air-Sole unit in the midsole has been replaced with a jagged design with French Blue and University Blue accents. Much like the previously mentioned “Hare” colorway, it was reissued in 2015 with updated materials but a striking similarity to the version that came out thirteen years earlier.

The upper of the Air Jordan 7 Retro “Citrus” 2006 is composed of black nubuck and has an inner sleeve reminiscent of a Huarache, as well as orange contrast stitching, which draws attention to the shoe’s distinctive silhouette. In the same vein, the Jumpman emblem on the outside collar and the angular ’23’ heel patch both have the same titular “Citrus” color. In order to facilitate putting on and taking off, a red webbing pull tab has been placed on the back of the heel. The black foam midsole is cushioned with Air-sole technology, and it has orange and red accents once again. In 2022, the shoe was reissued in a version that was otherwise identical to the original.

The “Pacific Blue” Air Jordan 7 Retro has a premium leather upper outfitted in a pearl white colorway. The neoprene tongue, which is imprinted with the Air Jordan logo, is a bright ceramic blue, while the heel and midsole are a bright ceramic yellow. The shoe also has Jumpman branding on the lateral collar and outsole, in addition to Michael Jordan’s jersey number 23 on the heel.

Tinker Hatfield’s initial sketch for the Air Jordan 7 served as inspiration for the “Bin23” colorway. The black and white heel detail of this retro release is included in the illustration. A leather top and neoprene sleeve round out the build, which also has additional color strokes along the midsole. When they were released in 2010 in a limited quantity of 2,059 pairs, each shoe was uniquely numbered on the underside of the tongue, which explains their high price.

Of the five original Air Jordan 7 colors launched in 1992, “Bordeaux” is often considered to be the most remarkable. The upper of the shoe is a blend of black and gray nubuck, while the midsole and outsole are both in black. Before its 2015 re-release, the shoe had previously only been retro’d in 2011.

It’s been almost a decade since the release of the Air Jordan 7 “Cardinal,” but in 2022, sneakerheads alike will finally be able to get their hands on an official re-release. For this particular model, the upper is constructed from perforated white leather with various details throughout. Cardinal red details echo at the midsole, heel branding, and trim, while golden hues strike the embroidered Jumpman at the lateral side and the heel tab. To finish off the vintage vibe, black is used for the bulk of the sole unit, branding on the heel, and on the stacked Air Jordan logo at the tongue.

Nike rekindled their association with Warner Brothers and Looney Tunes for multiple cartoon character-inspired releases in August 2015 as part of the “Hare Jordan Collection” to coincide with the 23rd anniversary of the initial release of the Air Jordan 7 silhouette. After Bugs Bunny got the “Hare” colorway of the AJ 7 in 1992, Marvin the Martian got his own namesake version years later. Smooth black leather covers the top of these sneakers, which are accented with alien green in key points. This is undoubtedly another timeless design from Jordan Brand that any sneakerhead would know at a first glance.

The 30th anniversary “Barcelona Nights” Air Jordan 7 Retro honors the silhouette’s historic importance since it was the sneaker Michael Jordan wore as a part of the legendary Dream Team at the 1992 Summer Olympics. This limited-edition colorway was inspired by the beautiful nighttime skyline of Barcelona, where the games were held, and has black nubuck and leather upper with colorful highlights.

The 2016 Air Jordan 7 “Doernbecher” is the result of a collaboration between Nike and the Doernbecher Children’s Hospital. The limited-edition shoe has a red leather upper with black marbled panels, a black midsole with gold accents, a white outsole depicting a cartoon version of Damien Phillips—the then 10-year-old patient that designed the colorway—playing the guitar, a gold Jumpman pin at the ankle, and gold branding at the tongue. Guitar pick lace locks, gold eyelets, and a heel tab styled like a guitar neck are a few of the additional touches.

The “Olympic Alternate” Air Jordan 7 is dressed head-to-toe in a royal blue hue that matches that of the Team USA Nike Basketball outfits in 2016 better than any previous gear in the series’ history. As the squad strives for the ultimate prize, a metallic gold color falls on the Jumpman logo throughout, and a white tumbled leather foundation gives a luxury remastered feel to the offering. Other details include a fire red gradient midsole and a prominent American flag logo with Mike’s Olympic number 9 on the heel. It’s a respective iteration on the aforementioned “Olympic” hue from 1992.

The Air Jordan 7 Retro “Pantone” debuted in 2010 as part of a sample collection at the World Basketball Festival before seeing a wider release in 2017. The nubuck upper of the University of North Carolina edition is dressed in university blue colors from toe to heel, with white accents exclusively on the logo and sole. The sole unit, on the other hand, goes in the other direction, going for an all-white appearance with the trademark midsole design that is only broken up by a UNC blue Jumpman on the outsole.

The Patta x Air Jordan 7 Retro OG SP “Shimmer” model is a collaboration between Jordan Brand and the Amsterdam-based streetwear label Patta. As part of a special capsule collection that dropped in May of 2019, this iteration has a quality leather and suede upper in muted earth tones including various brown and red hues. The underlay has distinctive perforated patterns and an offset Jumpman emblem, while the midsole has Patta writing in the brand’s iconic colors. The design, inspired by Michael Jordan and the Dream Team’s Olympic run in 1992 in Barcelona, has a durable rubber outsole reinforced by Air technology.

For the first time since 1991’s Air Jordan 7 “Hare,” Michael Jordan and Bugs Bunny have worked together on another colorway simply dubbed the “Hair 2.0.”  As a faithful interpretation of the rabbit’s foot, the upper is made of matted light green fur. The collar and neck are a muted pastel pink, and the back has a tricolor heel badge for a flash of throwback flair. Branding-wise, the Air Jordan can be seen written over the tongue whilst a Jumpman appears out of the perforations in the collar. The original “Hare” style code from 1991 is honored with a debossed “130014-100” on the medial heel as well.

The nubuck upper of the Air Jordan 7 “Sapphire” is colored a faint pink shade, while the quarter panel and collar mesh are constructed from semi-translucent materials. A neoprene inner sleeve in the titular color and pink gives a tight, snug fit while a webbing pull button at the heel facilitates removal. The upper is stitched to a grey foam midsole with white speckles that has an embedded Air-sole for added comfort. This sneaker was released in April in celebration of the silhouette’s 30th anniversary.

The Bephies Beauty Supply x Wmns Air Jordan 7, created in collaboration with the LA-based company established by Beth Gibbs, interweaves the iconic silhouette with features inspired by the great outdoors. The traditional nubuck upper in brown has been modernized with mesh panels and a drawstring at the ankle. The heel strap of these Bephies Beauty Supply-sponsored Huaraches is engraved with the words “Air Jordan” in pink. The transparent outsole is made of rubber and is branded with the Jumpman logo. The partnership also launched with a “Seafoam” colorway, in which the model is dressed in a variety of greenish-blue colors.

As its name implies, the Air Jordan 7 “Afrobeats” is inspired by Afrobeats, a broad category of West African musical music. The shoe is built with a vachetta tan upper, a black sole, a cab red lining, and a dark concord sole. The bulk of the upper is a two-tone tan, with black and white accents and purple and yellow hits on the midsole. The shoe has a variety of geometric graphic designs.