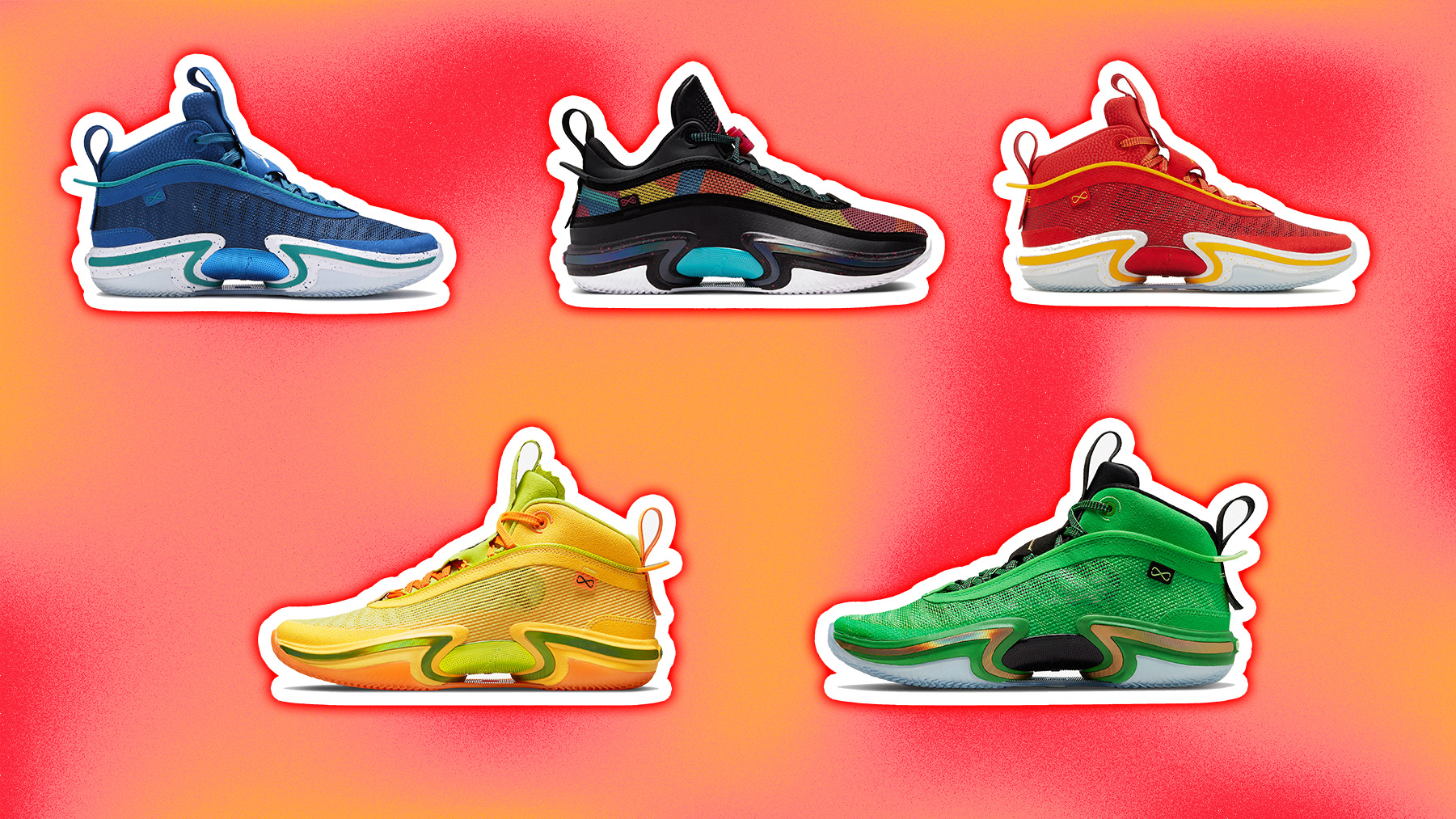 Air Jordan 36 Releases: Everything You Need to Know About the Sneaker

The Air Jordan 36 follows in the footsteps of the previous two models and maintains the brand’s current trajectory. It was originally previewed by German-American basketball player Isatou “Satou” Sabally on social media in 2021, and as the name implies, it’s the 36th model in Michael Jordan‘s trademark shoe line.

Although it shares certain dimensions with the aforementioned Air Jordan 35, its general form and height are too divergent, and it also has notable structural variations. Instead of an Eclipse piece that arched over the midfoot and a bulky cable system, the new model has a much more seamless mesh top and a mudguard that is divided by a smaller midfoot plate. The tabs on the lateral wall have an infinity symbol in place of the Jordan logo, while the heels have a heel pull tab and a little lipped-out spoiler rather than the usual Jordan branding.

The Air Jordan 36 “Glory,” the first colorway of the high-performance basketball sneaker, pays tribute to Michael Jordan’s championship legacy with a clean design that’s accented with metallic gold. Metallic gold details, such as the shoe’s upper eyelets, a strengthened two-loop band that garlands the midsole, and Jumpman branding hits on a pair of lace guards, break up the otherwise uniform white top and outsole.

The Air Jordan 36 “Slovenia,” a player-exclusive colorway developed for Luka Doncic, debuted exclusively in Asia, Latin America, and Europe—the latter being his birthplace in Slovenia. The sneaker’s upper is blue leno-weave with synthetic overlays in the same shade and a teal TPU ribbon at the shoe’s top and back. The laces can be pulled via a tab at the top of the tongue, with the Jumpman emblem appearing on the right sneaker and Luka’s own mark appearing on the left. A part of the speckled foam midsole is cut out to reveal a midfoot shank, and the shoe’s traction rubber outsole is patterned like a herringbone for further durability without sacrificing transparency.

The “Psychic Energy” color scheme pays homage to the series’ roots by returning to the original Jordan colors of white and varsity red. White jacquard leno-weave covers the top of this lightweight design, with black accents appearing on the tongue and collar of the shoe. For the latter, Jordan Brand added a shiny university red Jumpman logo. Underneath the eclipse plate, the shoe rests on a portion of Phylon that has been hollowed down. The outsole of these shoes is made with a transparent herringbone traction rubber that provides outstanding traction.

The Air Jordan 36 “China” is a special edition colorway created for professional basketball player Guo Ailun. It has a red leno-weave upper reinforced with tonal synthetic overlays and a yellow TPU ribbon that wraps over the collar and neck. The foam in the midsole is speckled with yellow, and there is a cutout in the middle that displays a midfoot shank for support. Rounding out the design, the soles of these shoes have an all too familiar cool transparent outsole that provides excellent grip.

A new era of basketball prowess and ultraviolet rays serve as inspiration for the bright color scheme of the Air Jordan 36 “First Light.” Uppers of the silhouette’s signature stretchy jacquard leno-weave in a colorway that combines purple and Hyper Violet drape the featherweight design. A pull hook at the heel has “Thirty-six” and Nike Air branding, while a lace guard decorated in the style of the Air Jordan 6 sports a purple iridescent Jumpman emblem.

The white leno-weave upper of the “Flight School” colorway has large, text-based designs that call back to previous Jordan releases. Branding details and the phylon midsole, which is bolstered by a full-length Zoom Air Strobel and a stacked Zoom Air unit in the forefoot, are outfitted in a contrasting rich crimson. An outsole made of transparent rubber ensures grip in both wet and dry conditions.

Because of its lightweight and airy composition, the Air Jordan 36 Low “Black Multi-Color” has a design that stands out from the crowd. The upper is made of Leno-Weave and has a mix of washed teal, vivid sulfur, and rush pink with no-sew overlays for support and a TPU ribbon in the same color. Red Jumpman motifs are placed on the tongue, and the silhouette’s signature “Thirty-six” markings can be found on the heel tab.

The Air Jordan 36 Low is the newest iteration of the brand’s signature basketball sneaker to receive the “Pure Money” color scheme of white and silver. This model has an all-white upper with silver accents on the outer trim, an iridescent sport stripe on the midsole, and a Jumpman logo on the tongue typical of the shoe. As expected from the colorway’s clean look, the outsole is translucent to round off the design.

The NBA star’s favorite postgame meal inspired the design of the Jayson Tatum x Air Jordan 36 Nitro “Taco Jay.” The tongue and collar lining are a bright lettuce green, and the rest of the ultralight Leno-weave top is a yellow that’s reminiscent of shredded cheddar or a taco shell. Heel tabs branded with “Taco Jay” and lace guards with a taco design interwoven with the Nike Swoosh are two examples of the shoe’s distinct branding. This is undoubtedly one of the more creative colorways of the model released in 2022.

The “Celtics” Air Jordan 36 takes on the aforementioned team’s alternative lucky green, black, and gold threads, with the former dressing the bulk of the shoes and the latter introducing perfectly-balanced black and subtle bursts of gold over their normal places. The icy outsoles are still there underfoot, and the suede upper makes for a unique overall colorway.

The “Black Infrared” colorway is a classic look for this high-performance sneaker that’s been repeated time and time again across other silhouettes. Black leno-weave uppers are joined by TPU ribbon for reinforcement while a synthetic nubuck collar is held together with reflective laces. The phylon midsole has a full-length Zoom Air Strobel and a forefoot Zoom Air unit, while infrared elements can be seen on the heel tab and Jumpman logo.