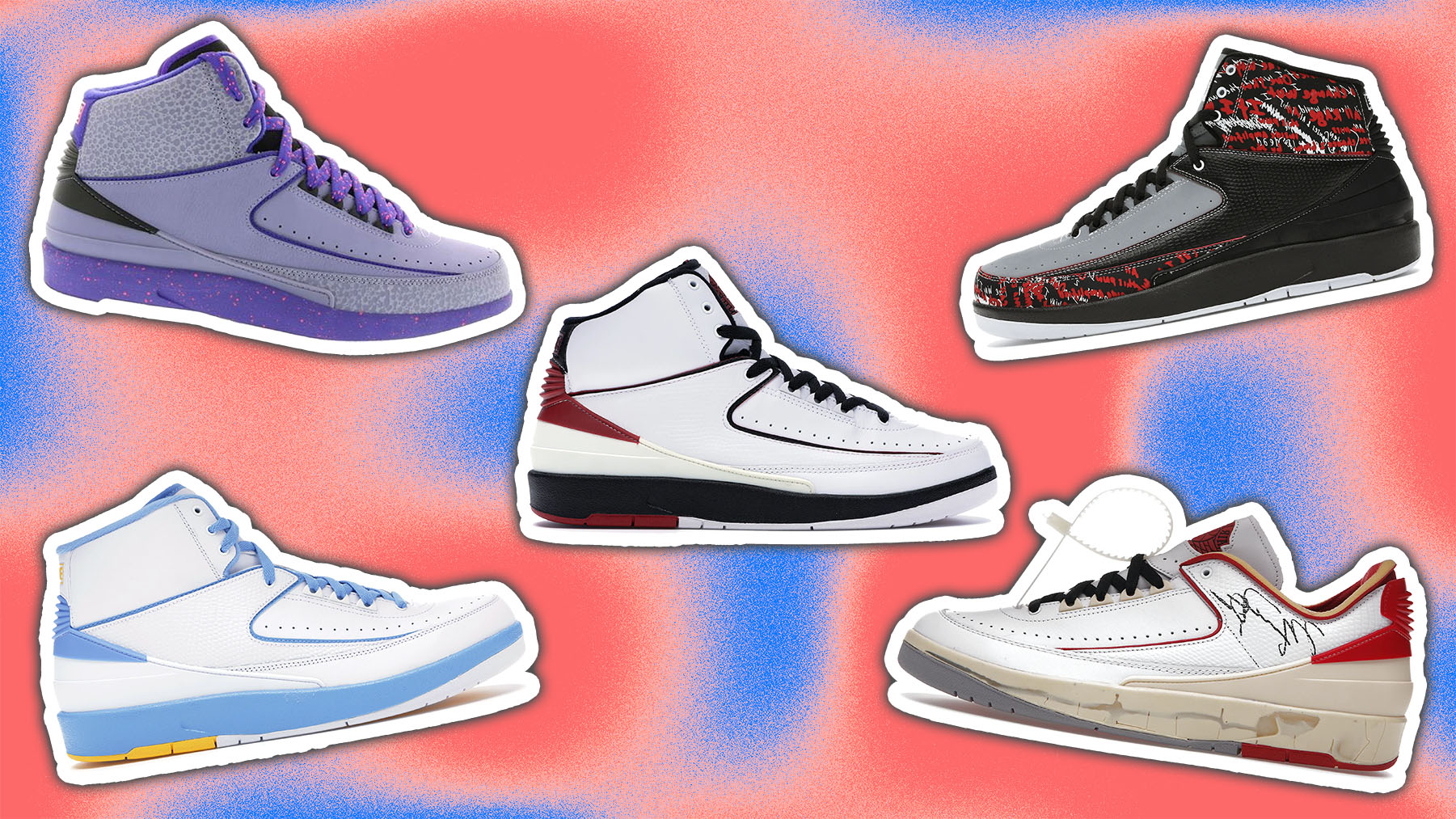 A foot injury Michael Jordan had during his second season necessitated a modification to the original Air Jordan 1 model in order to restore his former level of mobility. Thus, the Air Jordan 2 was created by Bruce Kilgore, and its cushioned midsole revolutionized the sneaker industry. The comfortable cushioning offered by the midsole combined the concepts of luxury and sportswear, debuting in 1986 with the “White Red” colorway.

Below, we examined some of the most popular AJ2 releases since its initial release, including player exclusives and collaborations with musicians and fashion labels. Continue scrolling to check them out and maybe you’ll even cop a pair or two.

While playing for the Denver Nuggets as a rookie, Carmelo Anthony donned a special player-exclusive colorway of the Air Jordan 2 that featured a white upper with “Carolina Blue”  and “Varsity Maize” accents. The back of Anthony’s signature pair read “MELO,” his nickname, while the back of the public release version reads “NIKE.” A multicolored outsole complements the colors of the aforementioned NBA franchise.

Eminem’s “The Way I Am” track and book of the same name inspired a special colorway of Jordan Brand’s signature silhouette in 2008. The sneaker’s design was inspired by the rapper’s birthplace of Detroit, thus it includes a grey suede top with holes around the forefoot to increase ventilation. The sneaker’s mudguard and ankle have white and red letters that allude to song lyrics by the platinum-selling rapper.

In honor of Jordan Brand’s silver jubilee in 2010, this special “25th Anniversary” edition of the Air Jordan 2 was released. The 3M reflective metallic silver accents on the trim, mudguard, heel, and tongue serve as stand-out details. As an added bonus, it has white patent leather on the side panels, white tumbled leather on the toe box and minimal AIR branding on the heel that complements the overall colorway.

Michael Jordan’s alma mater, the University of North Carolina, is honored in this Air Jordan 2 colorway by using a “University Blue” leather upper with black detailing. Underfoot, one can see a black midsole and a cold, transparent outsole that many sneakerheads have come to love over the years. Faux lizard skin panels and the silhouette’s iconic Wings emblem on the tongue round off this sneaker.

Yellow faux lizard skin dominates the top of the Air Jordan 2 Retro QF “Candy Yellow,” which also boasts a black midsole, heel, lining, and laces to complement the overall color scheme. In addition to the Wings motifs on the tongue and heel, perforations in the toe box and midfoot, and a white outsole, this mid-top shoe has a number of other distinguishing characteristics. The shoe was also made available in red and green colorways alongside the standout yellow hue.

The Air Jordan 2.0 “White Varsity Red” is a throwback to the original Air Jordans in design, but with updated technology and Michael Jordan’s Chicago Bulls colors. The shoe, taking on a color scheme of white, black, and red, is a throwback to the 1986 original in many ways, including the use of a leather top and the placement of the Wings emblem on the tongue. The Nike Swoosh has been replaced with the word “Air” on the heel, and the shoe now has a white outsole and a Max Air unit that differentiates these from previous releases.

The Air Jordan 2 Retro “Concord” is a mashup of many Jordan designs, with the tongue and side panels featuring an elephant pattern that was influenced by the Jordan 3. Meanwhile, the black midsole is inspired by the Jordan 4, while the titular “Concord” hue is used for the Jumpman logo, laces, and outsole. The grey and white outsole completes the sleek design.

In 2014, the “Iron Purple” colorway of the Air Jordan 2 was introduced with an interesting mixture of colors and patterns. The upper is constructed from a combination of nubuck and full-grain leather, and the shoe itself has a safari-like pattern, two-tone laces, and a speckled midsole, all of which are colored purple with traces of “Infrared 23” orange. The black tongue and heel counter stand in stark contrast to the white outsole.

Don C added a quilted texture to the Air Jordan 2 that was inspired by that of Chanel handbags, a nod to the shoe’s Italian heritage. Debuting in a “Varsity Royal” colorway, these are among the most sought-after releases in the silhouette due to the fact that it wasn’t available at typical Nike retailers. These kicks were issued with a matching bomber jacket and had premium packaging, dustbags, and gold Wings motifs pins. The same design was carried over to subsequent Jordan 2 releases with Don C, particularly 2016’s “Beach” and 2017’s “Arctic Orange.”

The Air Jordan 2 Retro Deconstructed “Bordeaux” shoe reinvents the classic model in a sleeker form and deeper purple. There were four other hues made available—”Mineral Gold,” “Triple Black,” “Sail,” and “Mint Foam,” however this one was exclusive to the East Coast. The removal of unnecessary padding allows for a sleeker overall design, and the top material, premium suede with perforations, is a departure from the traditional AJ II aesthetic. Other features include rubber branding on the tongue and heel, as well as a molded EVA midsole.

African-inspired designs are scattered over the all-leather upper of the Air Jordan 2 Retro “Black History Month,” which arrived just in time for the month of February. The heel panel has bright blue and yellow accents, while the rest of the upper’s black leather is subtly printed in a monochromatic pattern. The black midsole is accompanied by a colorful rubber outsole that features some of the same hues throughout the uppers.

The Off-White x Air Jordan 2 Retro Low SP “Black Varsity Royal” is Virgil Abloh’s take on the sneaker. The low-top design has a black leather upper with a lizard textured overlay in the same color scheme complemented by royal blue highlights. A plastic zip tie, some Helvetica writing on the shoe’s medial side, and the words “SHOELACES” written on the laces are Abloh’s contributions to the shoe, which also include Michael Jordan’s autograph scribbled over the lateral side. The midsole’s artificial cracks make the shoe seem worn and vintage, and this sneaker is one of two Jordan 2’s Virgil worked on.

The Union LA team, led by streetwear shop owner Chris Gibbs, gave the Jordan 2 a light blue textile upper with a neutral suede mudguard and quarter panel that included perforated details that revealed a brilliant blue underlay. The bright color is repeated on the sneaker’s molded eyelets, which are complemented with a yellow “UN/LA” marking on the lateral side. A vintage Wings emblem is woven into a tag that loops over the collar, and a massive Jumpman label is sewn into the tongue of the shoe. The shoe is held together by a blue polyurethane midsole that encases the shoe’s signature Air-sole cushioning system.

Youssouf and Mamadou Fofana, designers and co-founders of Maison Chateau Rouge, gave their Air Jordan 2 a color blocking similar to the “Shattered Backboard” release. Off-white leather is used for the top, and it has orange nubuck overlays at the forefoot and heel. The perforations on the leather are designed to seem like brogues. The tongue has a yellow Wings logo, while the heel tabs are a mishmash of Nike and Maison Château Rouge logos.