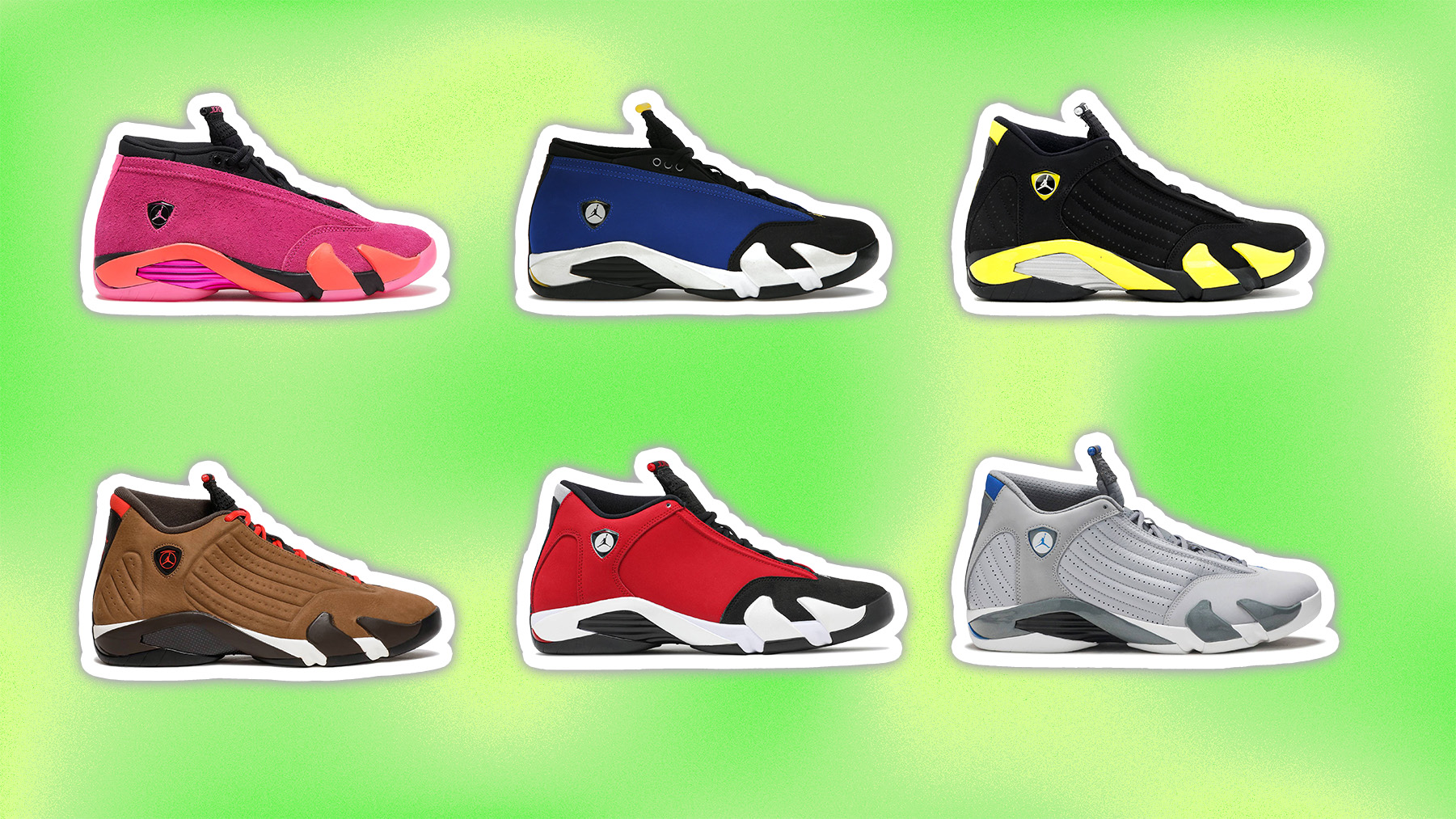 Air Jordan 14 Releases: Your Guide To The Sports Care-Inspired Sneaker

The Air Jordan 14 is Michael Jordan’s fourteenth trademark sneaker, as the name suggests. It debuted in 1998 with a design heavily inspired by Ferrari to pay respect to the renowned NBA player’s passion for fast cars.

The shoe made its court debut in his last game with the team, Game 6 of the 1998 NBA Finals, when he nailed the famed “Last Shot” to seal the series and give the Lakers their second three-peat and sixth NBA title. Jordan won his 10th scoring championship that year, and he repeated as regular-season MVP, All-Star Game MVP, and NBA Finals MVP.

For the Retro 14, Tinker Hatfield went back to the drawing board, integrating the curving lines of a sports vehicle and finishing off the look with a Ferrari-inspired shield beneath the ankle collar that, in place of a horse, displayed the Jumpman emblem. There are a total of 14 Jumpman emblems on the set, 7 on each shoe. Two on the steel lace tips, one on each side of the shield emblem, two on the insoles, one on the toe box, one above the “23” on the heel, and one at the bottom of the outsole characterize the design.

The Air Jordan 14 Retro is as relaxing to play in as it is powerful and responsive, much like the automobile it was inspired by. The low-cut collar provides freedom of movement at the ankle, while the responsive cushioning of two Zoom Air units reduces the impact of each step. In addition, perforations in the outsole made of mesh allow your foot to better circulate air. Continue scrolling to read about some of the most prominent releases and where to grab them at.

The Air Jordan 14 Retro ‘Black Toe,’ first introduced in 1998, returned in 2014 along with other retro editions of the Air Jordan 14. It also retro’ed in 2006, but this 2014 edition is the first time they’ve been seen without the ribbed panels that adorned the earlier iteration. This sports car-inspired design, like its namesake Jordan 1 hue, adds a black overlay at the toe. The Jumpman logo, a hallmark of this design, shines out at the ankle and joins the varsity red branding and heel.

The Air Jordan 14 “Laney” first appeared in 1999, following Michael Jordan’s second retirement. It made a much-awaited return in 2015, being retro’ed alongside a handful of other releases. The shoes’ upper is constructed from nubuck in a color scheme inspired by Michael Jordan’s high school team Emsley A. Laney High School. Its signature color of royal blue is highlighted with varsity maize at the tongue, heel, and Jumpman to pay homage to Jordan’s high school basketball squad. Unlike previous models, the shoe lacks the customary holes along the side walls.

After leading the Bulls to another championship with his now-famous final shot, Michael Jordan launched the Air Jordan 14 Retro. This updated version, first released in April 2019, has a leather upper with channel stitching and holes, much like the original from 1998. Stylish Jumpman logos and striking mudguard elements emphasize the shoe’s theme of speed and luxury. The herringbone groove on the rubber outsole is a nod to basketball’s illustrious history.

The “Shocking Pink” women’s exclusive Air Jordan 14 Retro Low takes the classic low-top design and injects it with a youthful spirit. The upper is a bright fuchsia, and it’s paired with a shaggy suede tongue and a black Jumpman logo on the lateral side. The Phylon midsole, collar, and tongue are all black to complement the red toothy details on the 14. Zoom Air cushioning components are encased in the forefoot and heel, while a carbon fiber shank plate reinforces the shoe’s stability in the midfoot. The shoe has a pink transparent rubber outsole with a herringbone traction pattern to round out its design.

As part of the 2008 Countdown Packs released in anticipation of the Air Jordan 23, this Air Jordan 14 Retro was paired with an Air Jordan 9. While the hue is evocative of the legendary “Last Shot” version of the silhouette, this release largely differs in many significant ways. For one, the upper is constructed of black suede with contrasting white stitching rather than neutral tumbled leather. It’s a classic black design with hints of red scattered throughout.

The Air Jordan 14 made its long-awaited comeback in 2014, in a total of four colors, the “Thunder” being one of the most visible. The top is constructed from a smooth black suede, a nod to the Air Jordan 4 “Thunder,” with contrasting yellow accents on the midsole and logo. Many sneakerheads alike will instantly recognize this colorway, and new photographs of the model in a potentially new hue have just appeared online.

The Air Jordan 14 Retro “Ferrari” has a premium suede top in a deep Challenge Red, furthering the shoe’s automobile theme. The shoe’s yellow Jumpman logo and carbon fiber accents are meant to evoke associations with Michael Jordan’s Ferrari 550 Maranello. The low-top shoes include a chrome shank plate and bright yellow accents on the tongue and heel. Arguably, this is the shoe that comes to mind when you think of an Air Jordan 14.

“Wolf Grey” dominates this Air Jordan 14 colorway, giving the Ferrari-inspired design a muted yet striking look. In addition to the outside Jumpman insignia, accents of sport blue can be seen on the shoe’s tongue and heel. The carbon fiber plate is black, while the stripes on the midsole are a deeper grey. The tumbled leather treatment on the upper has perforations for an airy design.

The ‘Ginger’ Air Jordan 14 Retro is a new take on the classic low-top model from 1999. The upper has been redesigned to a mid-top silhouette and has a golden yellow nubuck upper with a white leather forefoot overlay. Both the Ferrari-inspired emblem and the rubberized heel overlay include huge Jumpman insignia in a debossed tire-tread pattern. The Phylon midsole has encapsulated Zoom Air cushioning and is decorated with a geometric teeth-like design; the TPU shank plate provides additional stability.

It’s no secret that many sneakerheads have grown fond of the Air Jordan 14 Retro’s classic style over the years, and now you can get your hands on a winterized version of it. Using water-resistant nubuck in archaeo brown, the upper is seamless and vacuum-molded. All of the sneaker’s identifying features, from the Ferrari-inspired insignia to the “Jordan” lettering on the tongue to the Jumpman and “23” imprinted on the heel overlay, include contrasting chile red highlights. These sneakers are supported by a Phylon midsole and include Zoom Air units in the forefoot and heel for lightweight cushioning.

Following the success of her Nike Air Jordan 1 collaboration, Aleali May’s next Jordan Brand project was one worth lots of chatter. The stylist and fashion blogger’s unique stamp can be seen on the Nike Air Jordan 14 Low this time around. May has gone for an all-suede grey top with minty green marbling on the midsole and tongue for their collaborative effort named “Fortune.” The shoes’ appearance is completed by the addition of gold accents to the outsole. Aleali May’s autograph adorns the lid of the sneaker’s mint green packaging as an added plus to this coveted release.

The Air Jordan 14 Retro “Gym Red” has a classic colorway suited for Michael Jordan’s time with the Chicago Bulls. The uppers are made of red suede and it has a black toe for contrast. Providing lateral support and responsive cushioning are Zoom Air units in the shoe’s heel and forefoot, respectively, while the shoe’s white midsole has a noticeable shank plate. The herringbone pattern on the black rubber outsole provides excellent grip.