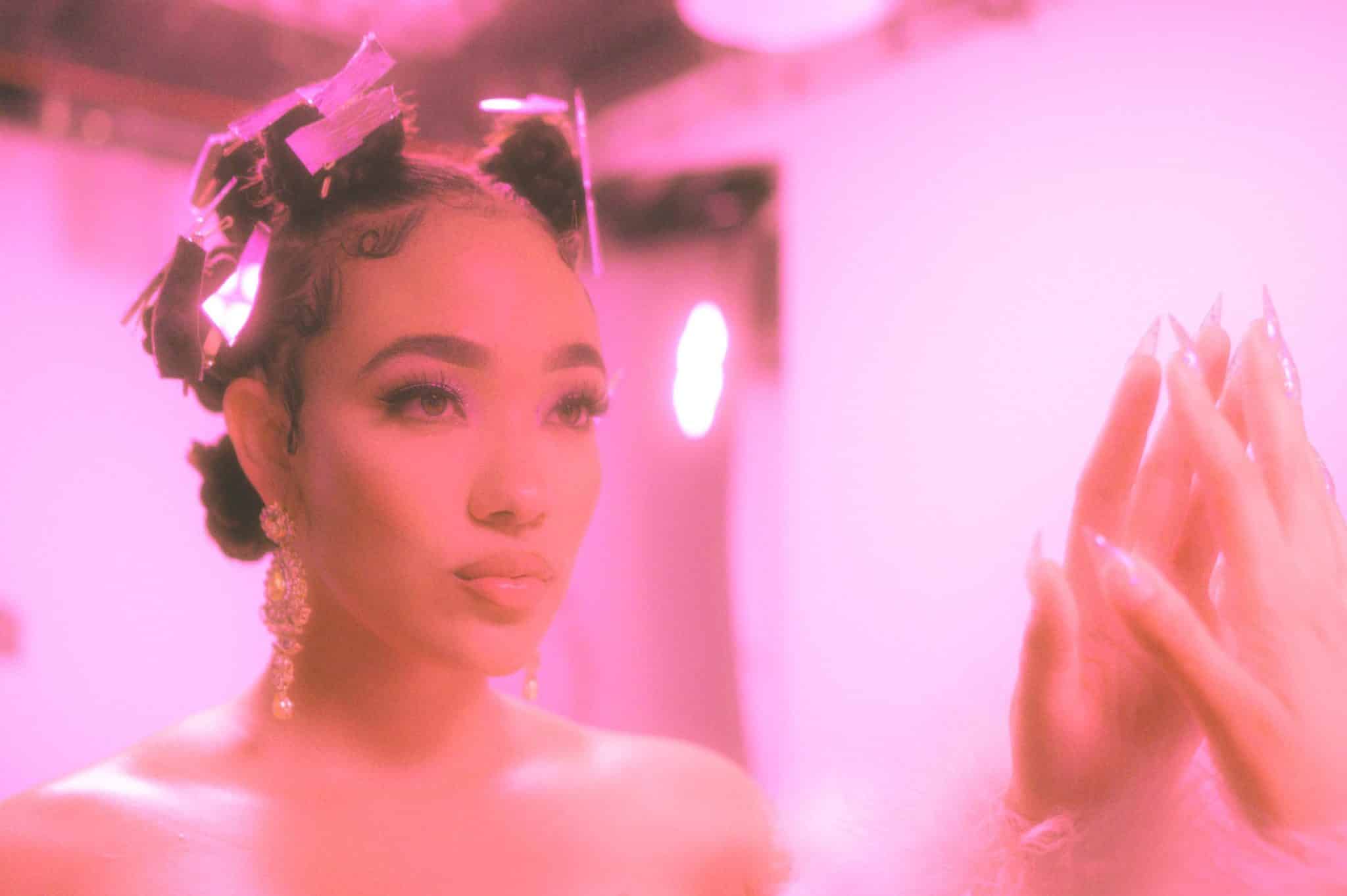 Bairi on Her Evolution, Creating New Music, and the Evolution of R&B

Bairi is a visionary storyteller in her own right, interweaving tales of love and heartbreak with outcomes of self-discovery across her alluring songs. Having first made her entrance to the scene in 2018 with “Icnu,” the songstress has been steadily honing in on her craft over the years, but now she’s ready for full dominance.

Towards the latter of the year, Bairi released one of her strongest records to date aptly titled “Paraíso,” a Spanish translation of “Paradise.” The song is a gleaming showcase of the artist’s vocal prowess and honey-hued melodies as she goes to war with her demons and concurrently unlocks a new fraction of her artistry. “Finally learned I’m all I need, I’m the woman of my dreams,” she gracefully sings over Little Island and Johan Lenox’s production. The record was followed by a string of remixes compiled into a six-song EP with several iterations that alter the fan favorite.

Leaping into 2022, Bairi graced fans with the release of “Spring Cleaning,” which landed the cover of TIDAL’s “Slow Jams” as well as Apple Music’s “Brown Sugar” playlist among others. Prior to that, she collaborated with Atlanta rapper Deante’ Hitcock for his track “Neck Up” alongside frequent collaborator Dende, further cementing her as one of this generation’s most promising acts to keep an eye on. Currently preparing for the release of her upcoming project, Bairi is exploring her spirituality and who she is as a person both musically and personally.

For our latest interview, we chat with the self-proclaimed “siren” about her latest slew of singles, escaping the music industry machine of milking artists, transcending beyond a singular genre, and more. She’ll be headlining The Taste of Sounds Fest on August 11th—purchase tickets here. Read on for our conversation.

You dropped “Spring Cleaning” on streaming back in March, which is actually one of your first solo releases in a minute, what about the record is so special to you?

I originally dropped “Spring Cleaning” on Audiomack—love them—a while back and even then, people were telling me that it struck a chord with them. I wasn’t in the best space mentally when we dropped it on the other DSPs so I didn’t have it in me to really market the way I wanted to or the way that I usually do. Still, it surprised me how well it was doing in terms of streams, playlisting, etc. That song was and still is really important because I wrote it finally understanding how important it is to clear my space and energy of things that no longer serve me. I’m still sad I didn’t do content for it, knowing how crazy I am I still might, but I’m just so grateful for those still rocking with it.

As far as the newer material you’ve been working on, what space have you been in mentally, and has the process of creating music changed since last year?

I’ve actually been taking my own advice from “Spring Cleaning” and making room for myself to do nothing sometimes, to just breathe and be bored, and to let inspiration come to me. I haven’t written in a while, I think I had been hustling for so long since 2016 that I exhausted myself.

I took the majority of this year, especially after “Spring Cleaning” to do just that: clean my crib, cleanse my energy and just tap back into who I am as a human, not just as an artist. I feel my creativity building up as I unlearn and relearn myself and I feel like the time is coming very soon to open the floodgates onto paper. Until then, working on putting together a project (or two) with the hard drive full of songs that came from said hustle.

What games have you been playing as of late?

Beginning of this year I was heavily into BOTW and Divinity II: Original Sin. I’m playing AND streaming Kingdom Hearts III right now—my first Twitch game. Otherwise, I’m playing my first love video game Chrono Cross, the first game I ever picked out for myself.

I read that you’ve started to incorporate healing into your songs as well, whether it be from a therapeutic standpoint or just being vulnerable

I always wanted to be a therapist or something in music therapy. When I got to college, I tried to do music theory and I’m not good at math at all so I didn’t do it. I’ve really just been into learning about sociology and psychotherapy recently; just human behavior in general. I’m working with my girl Lina—my goated graphic designer—to incorporate everything I’ve learned not just in the music but in the visual art, videos, and the experience as a whole. My head spins trying to put all the pieces together but it’s so fascinating to me and if anything, I hope my vulnerability and lessons will help someone else.

Going back a bit, how did your career in music begin? Was it something you knew you were always going to do, or did it come about more randomly?

I remember when I was a little baby, I had this keyboard, and when I’d get bored of playing video games or hear a song that I like from them, I would pause the game and bring out my keyboard and teach myself how to play the song. I’d make random lyrics to it, and it was so corny! It wasn’t hitting back then. There’s this song in Final Fantasy X-2 called “1000 Words” and I taught myself that on the keyboard, changed some words, and then performed it at a talent show in the sixth or seventh grade, dedicated to my dad while he was deployed overseas. My mom was bawling at the end of it.

Even in these past few months of depression and feeling like things that I was trying to do weren’t working. This year is the first time that I’ve really questioned myself like, “Is this really what I want to do?” I was wrong for that because I always think back like singing has always been something that I’ve been in love with. When it comes to my career, singing is not like the least important part, but it’s the thing that I want to have fun with. It’s almost like a hobby in my career, but it’s the intentionality in everything else that I’m focused on. Singing is my passion, my voice is a gift, and I am just working really hard to honor that gift by using it to fulfill my purpose.

I feel like you’re in this unique position where many people are rooting for your uprise, whether it be R&B Radar showing you love or Twitter stans asking for new music. Are you happy with how things are going?

First of all, huge shoutout to Tomi and everybody at R&B Radar. In 2020, I had one of my first surges of social media attention due to them posting my lil cover of “Chicago Freestyle.” It gave me a boost of confidence in such a time of limbo in the industry.

In terms of how things are going in general, I think that this industry is so wonderful in everything else but the needs of the creative. The creative is really the whole reason that we even have an industry. So I think I was feeling low for a while because I was trying to feed the algorithm and a moment, but right now I’m taking control. I’m stepping forward and being like no, this is my shit, I will not become a slave to my passion. We’re going to do this my way. This isn’t just my journey, I feel like other people feel that they need that guidance.

I want to show that it is possible to have fun and get shit done. It comes with a lot of learning and a lot of mistakes, but hopefully, through my mistakes, people can do better for themselves. I don’t want people to suffer. You will fail and fail and fail but don’t get too down on yourself about it.

The genre of R&B as a whole has definitely changed a lot as we’ve seen with this new wave of talent and how fluid artists are in terms of introducing new sounds. What are your thoughts on that?

I believe that a genre is just another box to be put in. I don’t care to be labeled an “R&B artist”, but if consumers need a word to identify me then so be it. Genre fluidity is so exciting to me because it allows for innovation and collaborations we’ve only seen in our wildest dreams. Another thing I want to say is I’m tired of Twitter and R&B is not dead! It’s alive and thriving, even if it’s not “traditional”. I’m so blessed to hear the incredible music that R&B artists make.

I think consumers need to stop discounting music in general. If there’s something you don’t like, there’s so much more music out there.  One of my best friends is Dende, are you kidding me? How are you going to say R&B is dead!

His new single, “Block Me,” is really good.

I love “Block Me” but when I tell you I cannot wait for some of his unreleased to come out! There is one song, in particular, I can never get out of my head that I hope he drops soon—I’ll let you know which one it is when it does. Dende is truly incredible and I’m just glad to be able to call him a friend over everything.

Both musically and personally, what are you looking forward to in these coming months?

For my career, I’m really excited to finally drop a certain music video that was supposed to come out last year, announcement coming soon on that. I’m also working on some cool ideas for a website and other fun ways for my supporters and I to connect outside of social media. Two of my songs are in an intense battle to be the next single—in my head—so hopefully, that’ll sort itself out soon as well. Personally, I’m just really excited to have this newfound awareness of myself and to see how it translates in my life. Overall, I’m just excited to have fun and live out my dreams.