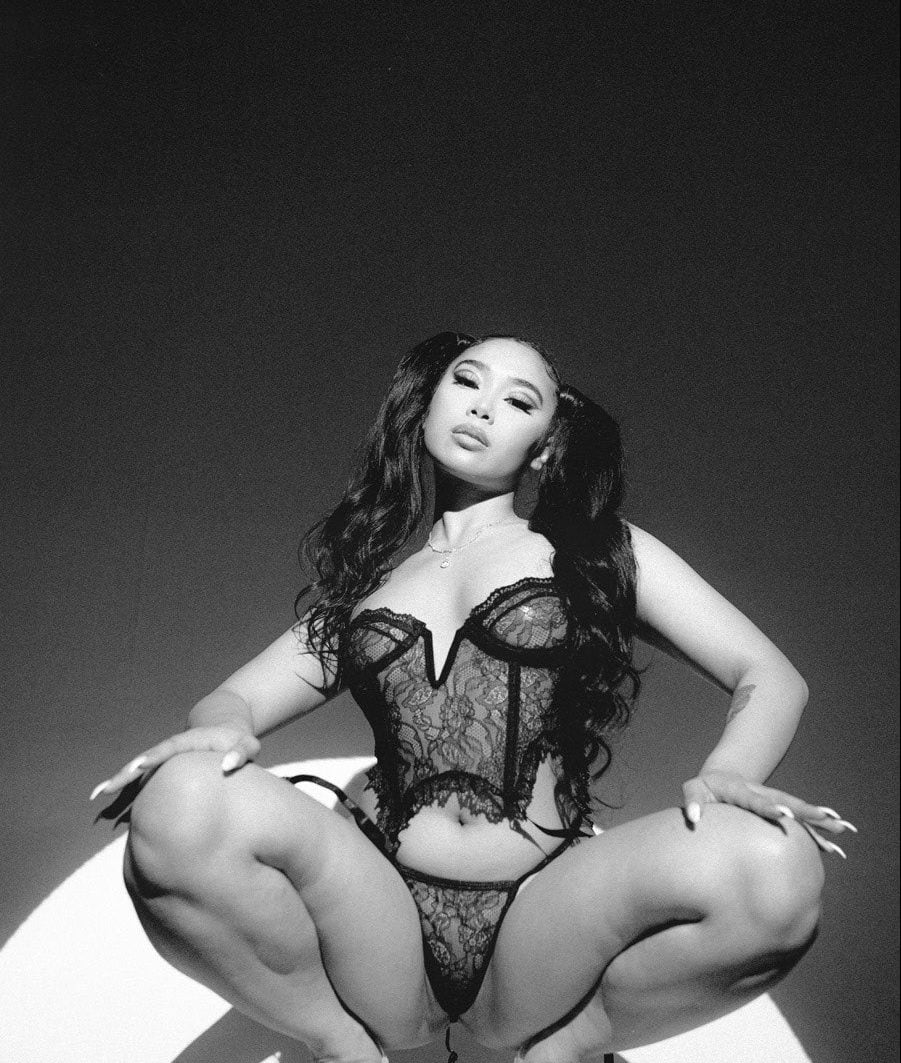 Angeloumae has made a name for herself with output ranging from soul-touching R&B to sexually empowering tunes. Born in the Philippines, raised in London’s cultural hub of music and fashion, she pulls from influences such as Rihanna, Kanye West, and Brandy amongst others. The singer, songwriter, and creative visionary discovered her love for music at an early age through karaoke, which eventually evolved into musical theatre and performing arts as she got older.

In 2019, Angeloumae issued her debut single “Love Don’t” followed by a slew of independent releases such as “Say My Name” and “How Many Times.” Much of her early catalog finds her delving into themes of love and the emotions enveloped in them from heartbreak to rebirth. Now, Angeloumae finds herself embracing the depths of explicit emotions and sexual desire, exerting that confidence onto her listeners. “I started writing more explicitly because, in Asian culture, we’re not taught to express that side of ourselves,” Angeloumae shares.

Now, blossomed into an artist with no limits, Angeloumae stands out for her dynamic voice, songwriting abilities, and versatile sound. The rising songstress is currently amid preparing her debut project as well as new visuals and music. Angeloumae is an exciting artist who’s is a direct reflection of her innermost thoughts and feelings at all times.

We sat down with Angeloumae for a conversation on multiculturism, channeling her creativity, new music, and more! Check out what the future holds for her below.

Originally from Manila, London is synonymous with all sorts of arts and culture. Being around such a fusion of multiculturism, how did it impact you growing up?

I moved to Scotland at five then I moved to London at ten. So I was always adapting so I wasn’t really here or settle in, I never really settled into a place. I noticed that in Filipino culture, we sing about love all the time. When I first started writing my songs, I got stuck writing about love from a victimized perspective like being heartbroken. My team told me I write too much about love so that’s why last year during lockdown, I was writing about a lot of different perspectives.

I started writing more explicitly because, in Asian culture, we’re not taught to express that side of ourselves. It’s very reserved as well so that’s what I’m embracing. I actually wrote a project last year with 13 or 14 songs and I was first going to name it Maldita, which is a typical bad girl. So I was like hmm, should I keep it?

Do you recall the moment when you decided that you wanted to pursue music full-time?

I’ve always been singing, I’m Filipino so it’s compulsory. I’ve always singed Karaoke when I was younger so my grandma would force me to sing in front of relatives. We do it every event we have so that’s where I got into singing. I moved to Scotland when I was five and I got into musical theatre. Most recently, I studied music, performing arts, and as of 2019, I wrote my first single “Love Don’t.” I went to the studio and finished that in three to four hours and it was first song that I properly wrote.

What’s a fun fact that not too many people know about you?

Well, there’s a lot! I’m not sure if you can tell but I’m very introverted. I was in foster care for a bit, it’s not typical as well especially in Pilipino households. I was homeless and I got my own place at 19, so yeah! That’s one thing.

Let’s talk dream collabs! If you could collaborate with anyone in the UK and in the US, who would it be and why?

Yes! So from the UK, I’m not sure if you’ve heard of [P]. He’s amazing, Bree Runway is amazing. H.E.R and I love Kid Cudi. Kanye West, I’m very Kanye inspired. I started trying to do production as well so that the new music is very alternative. It’s like a mixture of Aliyah, Brandy, Kanye’s My Beautiful Dark Twisted Fantasy. I don’t think it sounds like anything I’ve heard of now.

What do you want your songs to bring out or elicit inside of your fans emotionally?

So there’s a variety! I told you about the sexual type of songs, I want people to feel sexy and embrace their darkness. I always have a song on my project called “Lost Faith” and it’s like gaining back strength after feeling like you can’t make it. That’s a song that I wrote that’s in my mixtape. I didn’t know how much it would mean to people, it would make my team and friends cry and I would be confused but I listened to it on psychedelics and I couldn’t stop crying – when I wrote it I didn’t think it would make people emotional.

When you’re not writing songs and making music, how do you channel your creativity?

Some of the best songs I just make just come to me. I think the quicker I get onto a beat and just finish a song, the better it is. Visually, I like putting together mood boards. Visuals inspire me, I like watching movies like Desperado, Dawn of the Dust, and Kill Bill. Sometimes I’ll post visuals with the unreleased songs that are meant to go with the theme of the song.

From a glance, both your music and style are artistically pleasing, even down to the way you assemble your Instagram page. Tell me what role fashion plays in empowering you as both a person and creative.

I’ve always been very outgoing fashion-wise. At a young age, I was wearing whatever I want to wear and skin-out. I’m very into watching old fashion cat-walk shows and have always been very inspired by the fashion in iconic movies, 90’s video vixens, film photographers like Helmut Newton, and artists like Lil Kim, Rihanna, Foxy Brown, Madonna, Janet Jackson who have always exuded sexiness and confidence.

Obviously, your fans are looking forward to new music this year. What part of putting together a new song do you love the most?

I think just making songs that would bring emotions out of people. Storytelling definitely, because I feel like one thing missing in songs being put out is they don’t have stories. I write all my music so I’ve had to learn that through trial and error. It’s like what can I improve next?

Is there anything that they can expect from Angeloumae in the coming months?

So my next single is called “Dance For Me,” it’s a very sexy song and dominating. I’m also putting together visuals for that. Also, my project is finally coming out this year so I’m excited!